Last week, Owen, my third and almost certainly last ever baby, lay down with me and had his last ever breastfeed.


I was so very conscious that this would be the last one - though it was with a glimmer of hope that it might not be, that he had somehow decided to carry on.

He's been quite poorly for the last three weeks; sniffly, sore throat and very wheezy.  It turns out, after a visit to the doctors eventually (poor, neglected third child!) that he had a touch of bronchiolitis, which he has since happily fended off.

He had been refusing the breast rapidly during those few weeks, turning his head, suckling for only a small amount of time, before withdrawing with painful screams and tensing up his body.

Frustratingly, for both of us, what used to comfort him beyond anything else couldn't comfort him this time, and I have noticed a change in him these last few weeks for sure; he's become a lot more indepepndent, a lot more into crawling on the floor, wanting to spend a lot less time in his Jumperoo and getting frustrated in his walker.  He's practicing pushing himself up and trying to stand, however alarming that is for me to watch!

Suddenly, my wee baby is no longer a wee baby, but a bigger baby who is becoming more of a personality.


I'd just texted my best friend, who also has a baby of around the same age who is also breastfeeding.  We had been talking about it the last time we'd met up; she'd recently started to wean her little girl and asked me if Owen had started to drop feeds.

I knew he had (he'd started weaning ages ago), but I didn't realise quite how much until I spoke about it.

So I messaged her, a week on from this conversation, telling her, the only other person who I knew would understand how I felt at this moment and told her that I was almost certain that it was all over.

When I bought my first box of formula after 8 and a half months of good, solid work, it felt so odd - like a betrayal, like a freedom and like a need.

He needed the fluid - he had been refusing from me and refusing water, something had to give.  I had to satisfy that need to feed my ill baby.  He was becoming dehydrated and I couldn't pump off enough milk.

It felt like a betrayal too though - that was a lot of very hard work.  It was a lot of pride, a lot of love and a lot of tears which had gone into our breastfeeding relationship.  I looked at the ingredients on the boxes a million times.  I went back and forth to that shelf like a madwoman.  It's so silly - my other two boys had formula from a much younger age and I never even blinked, but for some reason I found such a harmonious and rewarding breastfeeding relationship hard to let go of!

I really felt a lot of freedom.  I also bought my first underwired bra for the first time in over a year.  When you have boobs as big as mine - that's a relief! It's amazing how much an underwire can boost your cleavage and make you feel so awesome again! I also felt a kind of release.
I had been this tiny little person's sole source of comfort and nourishment for 8 long months.  His go-to for every upset.  I was on hand 24/7, night and day for food and drink.  Not all babies are as velcro-like as mine, but Owen truly felt like I was the only one who could 'save' him and he was struggling with letting go of me.  Now I can leave him with daddy, and already their bond has grown more.  Already he seeks him out as well as me, which is lovely and, admittedly, a bit of a relief.  I have to go back to work soon and he has to be able to find comfort in others. 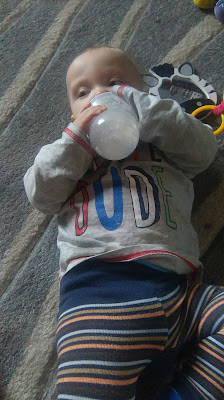 The most shocking thing for me is, I keep trying him with the breast with an off-handed hope that he will go back, but he is not even a bit bothered.  He'll nuzzle for a bit, then pull away.  If a bottle is int he room, he'll seek it out and drink it like he's always done it.  I guess I'm glad he feels so confident, givent hat at one point he completely refused a bottle!

He has most definitely self-weaned, there's no doubt about it.

Am I sad about it?

Yes.  Yes, yes, yes.  I can't begin to describe how sad I am that it's over so quickly. It was marvellous to think of my wee broken battered body as this strong provider of food for this growing living thing.  It was amazing to be the sole source of comfort, to know that I could cure any ill with my boobs!  It really was magic.  Pure magic.

I'm so proud and privileged to have experienced it.

I was so worried this would be the end of something though - and it is the end, no doubt, of a special time.  But it is a small time.  And it is a memorable time.  And it was a good time.
And something which being a mother of two other children has taught me is, that it is part of a much, much bigger picture and there are so many more memorable, good times to come. 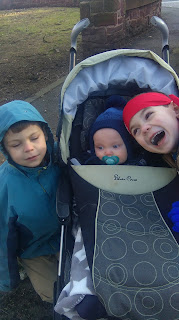