The Incredibles 2 - a trip with my boys

Now that the older boys are a bit less feral, it's actually pretty enjoyable to be out and about with them.
All the little things that used to completely stress me out when we went places (escalators, negotiating car parks, toileting) are all a thing of the past, and I have to say - it feels so chilled to go out with my older sons now.

I've been working pretty hard over the summer - which has given me massive mum-guilt.  The kids really haven't had the best of me this summer at all - even on holiday I still had to deal with work - so when we catch a few hours together, I try my best to make them as fun as possible.

Despite having our alone time yesterday and having filled my work hours for the week, I still had work to do and things to deal with, and the boys were yet again dragged along for the ride.  It was a hot hot hot day, and there was **SHOCK** NO INTERNET!!
(Which was the issue I had to deal with at work)
So while I spent a few hours dealing with being on hold to BT and sorting out various other issues which I always liken to fighting zombies...there's lots of them, they are relentless, and the don't care if you are ready for them or not; the boys were not up for quietly sitting.  There was no internet, therefore there was NOTHING TO DO.

They were annoying.  I wasn't listening.  We stayed way longer than I had told them we would.  I had been actively ignoring them for 6 and a half hours to prioritise work.

It didn't end well.  There might have been shouting from all of us.

We went out for lunch.  We got pizza together and I began to relax.  The pizza place is beside the cinema, and one thing led to another and....

Last night we went to the cinema together for the first time since I started my new job, which is MONTHS ago now.

We went to see The Incredibles 2. 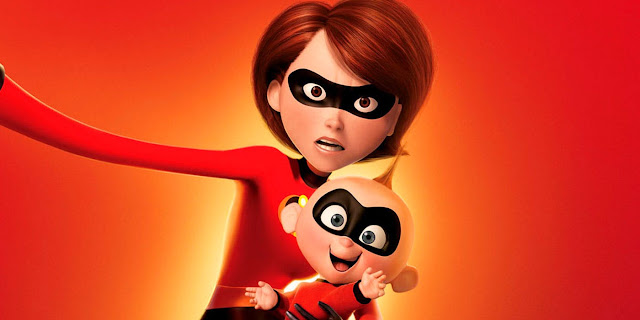 The irony is not lost on me that this brilliantly done and seamless sequel to The Incredibles features Elastigirl, or 'Mrs Incredible' taking the lead as the breadwinner for her family.  She has to give up family life to prove herself and become the poster-girl for superheroes.

Ethan exclaimed at the amount of adults in the audience: 'Where are the kids?  Why are they coming on their own?!'

He was right; there were a lot of couples in the audience - notably women.  With plenty of references to parenting, life as a working mum, life as a stay at home parent, the dynamic between couples when one is out at work while the other has to take a back seat, I think this film has really struck a chord with many people in similar situations.

Life as a working parent is difficult - and especially for women, who often face the dichotomy between being the home-maker and nurturer, while trying to be successful in the workplace.
It was very refreshing too to see Mr. Incredible struggle, but also generally succeed in giving up his career to support his wife.  Pixar really didn't adhere to the stereotype of the 'useless Dad' which was lovely to see. Instead, we see Robert Parr struggle and then work out what to do - finding his own feet and his own way of doing things for the kids.

It opened the door to speaking to the boys in the car on the way home about all the issues raised, which made for some interesting discussions.  It was kind of amazing to me, that despite feeling guilty and worried about having ruined the boys' summer, it seems they are very understanding of why mum has to work so hard.  Tom even surprised me by telling me that he was always amazed by how much I managed to do and how hard it is for me at home and at work.

I guess it was nice to realise that even though a lot of the time I do feel invisible, I'm not.  The boys still see me and they do see what I do - even if sometimes it feels as though they are completely oblivious.

It was also nice to have that time to realise that I need to work less and do more with my funny gorgeous, intelligent, and observant boys.

I am not Mrs. Incredible and yes, I do feel like Elastigirl - constantly over-stretching myself.

The small film at the start of the movie was even more poignant and actually had me in tears.

Bao is a mini Pixar film and focuses on mother-son relationships.  Sitting with my two boys watching a story about a mother who has grown older, raised her son and 'lost' him to teenage life, followed by the love of his life was emotional and difficult.  I'll not go into what actually happened so I don't spoil it for anyone, but if you are a mama raising sons, get out the tissues.

Another conversation-starter with my boys about how life is for women, and especially those with sons.  Their reactions?

They understand.  Which makes me feel like I am doing something right.

This was an important and much-needed check-in.  And I will be doing it more often.  Too much work, not enough boy-time.