I messaged my sister in law last night to see how she was getting on with her wee ones in the run up to Christmas.  She has a brand new baby boy and it's been a really busy time - I think she must be some kind of superwoman for getting everything together for Christmas and also looking after two kids aged two and under.  I remember quite well what it was like for us a few years ago - and Ethan's birthday was in October, which meant I had phenomenally more time to get my shit together (and I sincerely did not)!

This year I feel really overwhelmed - due to losing approximately 9 weeks of my life to morning sickness and the wonderful early stages of pregnancy, I feel like I woke up about a week ago to a nightmare-ish scenario of loads to do, lots to sort out and virtually no time left at all to do it.

Hence there has been a lot of panicked buying, planning and hasty wrapping going on. I feel like we have missed so much this year - usually I do all sorts of crafts and fun stuff with the kids, but this year we just haven't had the energy nor the time.  Still, we have done the fundamentals; we took the kids to see Santa at our usual venue and we still went to the cinema to see our annual festive film (which this year was Paddington - very nice indeed) which I think I enjoy more than anything.  I love making memories.

The boys popped into my workplace last-minute with Dave to make some lovely crafts with some other families, who all had an amazing time making snowmen out of cotton wool, glittery decorations and playing in the 'snow' foam tray with polar bear figurines.  It was so nice to let them be glittery and gluey and foamy without having to worry about house destruction!

In my panic about whether we have enough sellotape, or if I have forgotten anyone on my card list, I try to remember the stuff we have done.  The boys have been hyped since November - Christmas has been absolutely everywhere.  Our tree has been up since the first of December.  Tom has written his cards for his classmates. 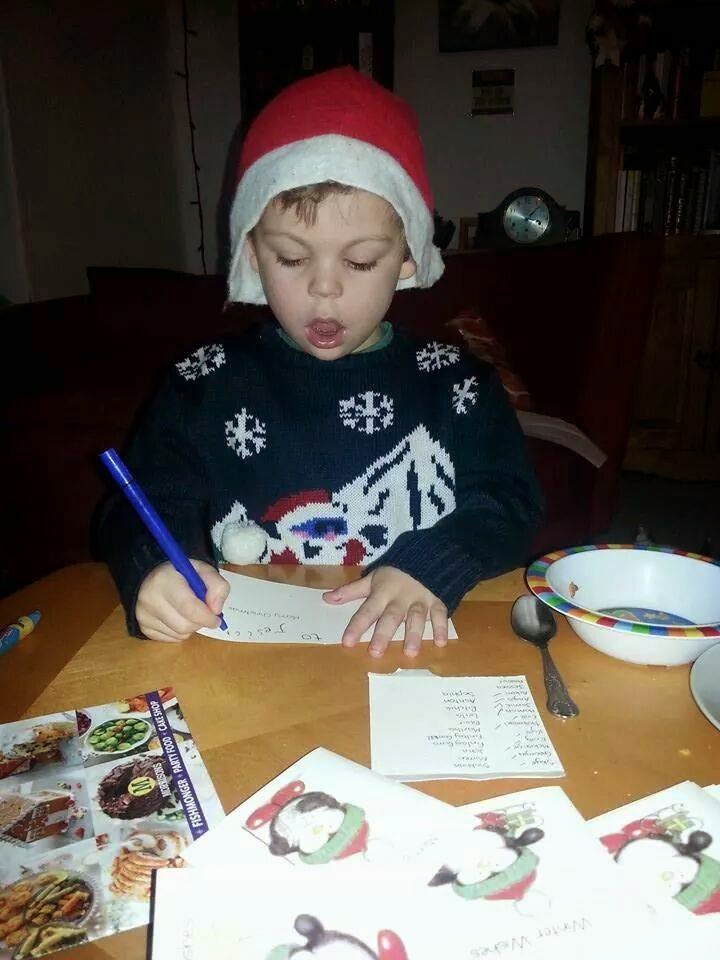 Yes, there are things we would like to be able to do but there is also the fact that the kids don't care!

None of us do.  There is stuff absolutely everywhere.  Where we live, we could visit a different Santa every day of the week for a month.  We could attend every single Christmas showing, Christmas panto, visit all of the Christmas shops, spend days and days watching a plethora of Christmas films, tv specials and documentaries.  The shops are stuffed to the gunnels with jumpers, antler headbands, santa hats and (of all things) Christmas leggings.  It's crazy.

Yet, I have been constantly reminded this year that it really is the little things.

It's spending time all together instead of stressing out at the shops.

It's watching The Snowman before bedtime.

It's reading Christmas books borrowed from the library.

It's getting excited at a Christmas card through the door.

It's dipping your cookies in your milk because 'That's what Santa does!'

It's dressing up like Santa, beard and hat included, because you are 4 years old and you idolise Santa.


In our wee catch up, my sister in law rounded off with this sentiment, which is something I have found to be very true: 'Christmas with kids is the best!'

You know what?  When you forget about the other rubbish, the magic of the season, especially in the company of little people who are very excited and loving the participation, really is the best.

These guys are really my reason for the season.