So, I thought I'd share with you the scan photo: 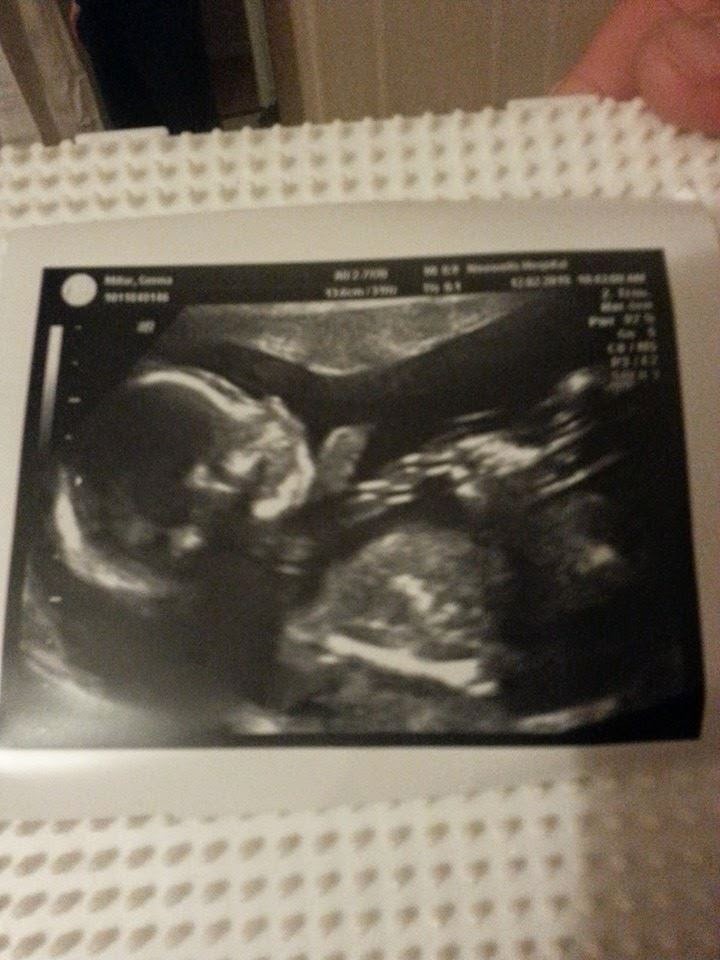 And also, the wonderful news that I don't have to think of some kind of crazy name change for the blog.

I am going to be a gang mistress for real now, complete with (very probably) nervous twitch, bad hair and lifelong ambition to get the house clean.

In all honesty though, I am extremely pleased to have another wee body to cuddle, regardless of gender, and am really looking forward to June.

The scan did show a wee problem with our boy's heart - a teeny wee hole in the upper Ventricular Septum of about 2mm.

In typical dramatic fashion, the scan took just under 2 hours to complete due to one very wiggly wriggly baby, who wouldn't sit still long enough (just like his dad!) to let everyone see what they thought they had seen.

Sadly, it wasn't just a grainy image - there really was something there.  It took a midwife, a sonographer and a consultant to check it out, but yep, one wee hole.

The initial conclusion is that it's nothing really to worry about and more of something just to keep an eye on.  In the grand scheme of things, it's early days and the hole should close over before birth. But as we all know, doctors must give us the worst case scenario, so we had to discuss things like the possibility of it being a sign that baby could have Down's Syndrome and also that he may need surgery as a newborn.

We were offered the test for chromosomal abnormalities, but declined with gusto - it would only tell us if he did or didn't have anything wrong and it comes with a tenable risk, so we vetoed it instantly.

The way we see it is, everything else on that scan was beautifully perfect.  And he was rolling around like a trooper with huge kicks, punches and headbutts.  Our baby will always be perfect to us.  And we would face any challenge that came our way.  And besides - the strongest possibility of all is that it will all be fine.

It's still not the kind of shock you need at a 20 week scan, but there are definitely worse shocks to get. We were very lucky to be offered a raft of appointments to keep an eye on things; our care now involves cardiologists, paediatricians and lots of extra scans.

One of which we had today in fact.

We had an appointment (or two actually) with the top foetal and paediatric cardiologist in Scotland, no less, who visits our hospital once a month.

We are now on his caseload, which kind of initially makes you go ' whhhaaaaaaaaaaaaaaat!?' because, well, you know, big important doctor, but for the same reason makes you go 'phew! Big, important doctor on the case!' And he had to travel from Glagow to see us today, so there was LOTS of hanging around for his arrival, but it was completely worth it!

He didn't seem too concerned - the feeling being that it's still kind of too early to properly assess actual amount of damage, and if there is the damage that they think there is, then it should be easy to treat.  Be that through surgery (eek! newborn surgery!?! Why was he so relaxed about this?!?) or a wait-and-see-what's-going-on, I don't know.

What I do know is that they are very reluctant to book me in for a csection date until they know more, which is kind of worrying me a bit.  There's a real chance we might end up delivering in Glasgow at Yorkhill rather than in our home town, so that's a bit of a head-mess too; right at a time where we are supposed to be moving house *groan* and trying to transition Ethan to primary school.

We never do anything by halves, that's for sure.

I'm ending today feeling a bit like this is all happening to someone else.  It's kind of hard to get my thoughts around all of the mad changes which are happening in my life, but I'm trying so hard to focus on the positives and keep the stress levels to a minimum.  It's tough though. So many alien concepts, especially after two (relatively) very healthy kids with no real complications.

It would be so easy to crumple under all of the pressure, but that's really not an option. I have to continue being a mother.  I have to go to work.  I have to keep house searching  so we have somewhere to live before this all kicks off.  I have to keep to my commitments and do my best; after all, it's all fun and good and awesome, and that's all happening too.

Dave and I like to have a bit of humour as we go, and we jolly each other along. Our humour might seem a bit black to others at times, but when you are faced with crazy crazy situations like these, it really helps to just generally laugh and make it a bit smaller than it is.  I'm so grateful to have a supportive husband like him.

Life's been a bit all-consuming lately.  I'm still very much grieving the loss of my old boy, Sparky, and we are stuck in a constant cycle of work, shifts, appointments, forms, school stuff, financial stuff etc etc.  I'm starting to look forward to the slower pace of summer, where we'll hopefully be settled with a healthy newborn, maybe a new puppy (maybe!) and the kids are playing in our back garden.

I'm holding on to that image in my head, because in six months time, once again, we'll be in an entirely different part of our lives, and all of this will just be yet another blip in the past.