November is upon us suddenly. 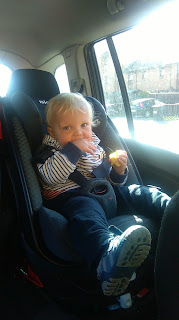 I almost can't believe it.

Next week America chooses the path of least...well...least...and the world has the potential to end.

This last couple of months has been an especially trying time at home.

We have settled into the house a lot more now - things are very gradually starting to take shape and I think we have finally gotten over the initial 'euphoria' of a new place to live and also kind of get our heads around the fact that we are staying put.

There's been a lot of decorating, work and general other shenanigans to deal with; when you have three children things are...complicated, to say the least!

Especially when one of those children is a year old and basically into absolutely everything.

Owen is great - he's the kid we really wanted and the kid we never expected too.  He's a blonde bombshell and is just adorable in basically every way (which is lucky because he's basically also destroyed anything we've ever done in this house in every way. Let's just say we need to decorate again before we finished decorating).

The other two boys have finally settled into routine and school life and have made friends (even if Tom is still clinging on for dear life to the idea that he's never going to - he has no confidence, just like his mum).

I finally registered as a childminder and have been having total panic about it ever since, too scared to advertise in case someone actually wants to take me up on it and I have to be responsible for one more kid.  Which I'm not really worried about.  But I am.

Plus the usual head stuff: Do the other parents think I'm some kind of incompetent?  They must do when they see me just trying to handle my own two crazy, loud, over-sensitive kids (are they over-sensitive or is this normal?  Oh god, what is normal?)  They must see the outside of my house and wonder what kind of a shit-show I'm running!? Surely?  Ahrgh.

Yeesh, I just feel like a terrible person all the time.  I wish there was something I could do to boost my confidence; but then I guess it's this stuff that pushes me on.  I'm never one to shy away from a challenge.

I'm doing some volunteering two nights a week too, and it's kind of great.  There's a real sense of accomplishment and I just enjoy hoping that we make a wee difference somewhere to someone who might otherwise be having a shitty time of it.

No real news. Nothing exciting as of yet.