Bursting the Pink Bubble; why pink is dangerous

Has anyone else noticed how gendered everything has become in the last five years or so?

It's something I have particularly noticed because I am a mother who was raised  in a female-only household and has therefore been brought up in a space where there were no 'boys jobs' or 'girls jobs'.  Everything was everyone's job - and if the girls didn't paint the room, fit the carpet, take out the bins, mow the lawn or take the dog out in the pissing rain, it didn't get done. 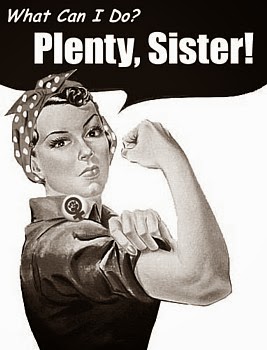 Having said that, I feel like I have been fighting for my gender my whole life.  From the well-meaning family members who insisted on buying me 'girls' magazines like Mizz when I really wanted to read The Beano and told me things like 'a lady doesn't behave like that' when they caught me digging in the mud, to being told at school that I should 'just settle for being a nurse, honey' when I really wanted to be a Veterinary Surgeon because 'girls make better nurses', I've been confronted at all points in the road with the fact that I am a girl and therefore should be doing 'girly' things.

Anything else made me 'a tom-boy' apparently. Grr!

My gender never felt more apparent than when I first fell pregnant with Thomas though.

It's the question every woman who falls pregnant is asked.
An odd question - only the extremely rich and scientifically minded can choose the gender of their child.  Yet everyone is asked in hushed tones almost; what would you prefer?


With Tom it was fine; I couldn't even conceive in my mind what it would be like to hold an actual baby that had come out of my body - that there was going to be something small that had my genetic traits - never mind care what kind it was.  To me, a baby was a baby.  I would just be relieved to get it out of me in one piece. When we eventually found out that he was a boy, I was just happy that I could begin to visualise a bit better what was growing inside me.

Everyone else was suddenly very concerned about buying lots of things in blue.

And , for the first time in my 'tom-boy'ish life, I was being treated like a fragile piece of china, and I did not like it one bit.

Worse - I felt like a fragile piece of china.

I found that being pregnant and having a new baby was the only time I felt completely vulnerable because of my biology.

Pregnancy is the ultimate female act, and it suddenly divided me from a lot of my guy mates, who didn't want to hear about Trimesters and Breastfeeding and Prams.


I became invisible to them because I had become female in their eyes, whereas previously I was 'funtime Genna' who could be silly and get drunk and have a good laugh down the pub, matching the guys capacity for pints of beer.

Once I became a mother, it also became my weakness.

I was also quite young, and a lot of my female friends hadn't even formed long-term relationships,never mind broached the idea of having a baby.

Their experience of babies were very much that you could buy 'stuff' for them, and so began a series of well-meant shopping trips with different friends for various pieces of baby equipment.

Everyone on those trips, myself included, cooed over the newborn stuff, all lamenting the fact that we couldn't buy the tiny, oh-so-pretty dresses.  Some even said to me 'pity you aren't having a girl, Gen!  Girls' stuff is so much nicer.'

I don't think I'd ever noticed until now; I'd spent my whole life turning my nose up at girly pink and frilly dresses.   And here I was admiring a tiny little headband for hairless babies and tiny little mary-jane shoes to accesorise with their tiny little taffeta skirts.

I blamed it on the hormones.

But the truth is, it starts before birth, all of this pink shit.

What's so wrong with it?

Well, I think the real question should be, what's right with it?

Sure, I have no problem with girls who pick pink as their colour of choice amidst all of those colours in the rainbow.  A lot of girls do it and enjoy it, and as a colour it can be all sorts of things; powerful, pale and gentle, happy and free.  And that's good.  I'm a huge advocate of letting your kids choose what makes them happy.

My real problem with the colour pink is that it has become a label for what society is telling young girls that they should be.

Infact, I am going to go all out and say that pink is DANGEROUS.

A study conducted by Polly Curtis for The Guardian  reached the verdict that:


'There is no scientific evidence that boys prefer blue and girls prefer pink. Up until the early 20th century the trend was the opposite and baby boys were dressed in pink and girls in blue. There are also some - small - studies suggesting that adults of different cultures have different tastes in colours. It's clear that colour preference is learnt rather than innate.'

Read the rest of the report here.

Children learn by repetition.  And what we are all unaware of is just how many times a day that it is being repeated in books, in adverts on television, in children's television programmes, in supermarkets, clothing, toys, games, films; girls, you like pink.

Pink means you are pretty, popular, happy, princesses who never get dirty and don't do all that silly 'boy' stuff.  Pink is your label.  Everything you like is pink.

So stay in your pink bubble and conform to your stereotype.


And there's where the danger lies.

By the time I was pregnant with Ethan in 2010, pink had filtered it's way down into things like prams, car seats, cots and every plastic toy now had a 'girls' version - in all hues of plasticky pink.

I now had friends who had had boys, who were now ditching their old prams and cots to buy a whole new set of pink versions for the 'pink flavour' growing in their bellies.

When I got to the time where I could find out the gender of my baby, I was inclined to decline; part of me really wanted a daughter and I was as yet undecided what my response would be when someone asked me the dreaded question, 'are you hoping it's a girl this time?'  I didn't know how to feel about it.  Some folk even commented that a girl would 'complete my family'.  What a crazy comment to make!  Oh and don't forget the classic 'if it's a boy will you keep trying until you get a girl?'


I decided to find out in the end, to satisfy my own curiosity, and was quite relieved to find out it was another boy.  I felt happy for Thomas that he would have a brother (Dave and his brothers share a remarkable bond and I'd love the same for my kids) and actually,I was quite relieved that I wasn't going to have to deal with the barrage of pink stuff which would surely have descended upon me.

Heads up folks, I would not have been grateful.  I might have been rude about it.  And given my hormonal state I probably would have struggled to be rational about it either.

I would have had a lot to say because passionately, I feel that it is so easy, far too easy in fact, to unconsciously let our daughters slip into the tight boundaries set by the patriarchy.  We all buy into it; because it's pretty and nice and fun.  We do not wholly investigate what the pink is telling us.  We are not asking what it means.

What we are not addressing, is the fact that by separating girls and boys by labeling them in this way, we are narrowing their horizons and putting them into boxes.

Children should be free to follow their own path in life.

In not having a daughter (thus far) I haven't avoided the problem.

Having two boys has not meant that I am removed from the pink issue altogether; indeed it has been an issue quite a few times.

Like, when my son wanted a doll and pram for his second birthday and people raised their eyebrows at him.

Or when I went into the toy-shop to pick a multi-coloured playhouse for the boys and the shop assistant basically overrode my choice, shouting at her colleague in the middle of the store to get me one with a blue door instead of a pink door, because "boys don't have pink"


"You'll thank me later when their friends don't make fun of them"
I couldn't speak.  I was too shocked.  My response was definitely about three days later once I finally got my jaw off the floor.

And I now have a hard and difficult task, as one tiny little woman, to counteract all of this stuff they are being exposed to on a daily basis.

When my 3 year old son points to a pink toy in the shop and says 'You like that mum, you like pink' and I say, 'No, mummy's favourite colour is green' and he gets upset and insists that it can't be because I am a girl, I don't like green, it's wrong.

Read again: Gets UPSET.  Like, emotionally upset with tears and stuff, because mummy is not conforming to what he has been told by everything, everywhere, all of the time.
That is wrong.

That's why I am backing campaigns like the one being fought in the Uk just now by Let Toys Be Toys, who have actually managed to convince some big-name retailers like Early Learning Centre to change the way they display toys in their catalogues and to change the labelling of 'girls' toys and 'boys toys.

Let Toys Be Toys is an amazing campaign - please check out their page and their blog and get yourself wise to these issues.  Too many of us are letting ourselves and our children sleepwalk into these constricting labels.

If you pay attention, it's filtered into adult stuff too.

Seriously, do we need it to be pink before we can figure out how to use it?  How condescending!
Ellen sums it up quite nicely in this video.  Seriously, watch it, it'll brighten your day!

I promise to myself and my children that I am going to be aware and raise the issue with them all through their lives.  I have always known I'd strive to be a good, strong female role-model for my boys.  I just didn't know the fight was going to be so tough!