Throwing a ball...and getting it back again...

Tonight I had one of the most pleasant experiences I've had for a while.

Tonight I took Kim into the field behind our house and I threw the ball for her. 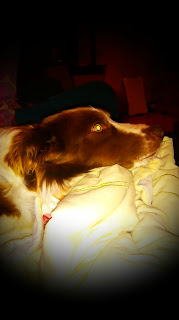 This is a momentous occasion for two reasons.

1. It has been nearly two years now since I threw a ball for a dog.  Sparky was pretty blind in his last year and used to crash into things, thus we rarely played.  My throwing arm is way out of practice - man it feels so good to finally throw a ball extra hard.  I forgot how far I could make it go.  After being pregnant, having a c-section and going through recovery it feels so good for my body too to be so physical again.

2. It has taken me the best part of six weeks to teach Kim how to play like this.  And to see her wag and stand up tall (and boy, is she tall!) and hang her tongue out of the side of her mouth as she smiles -just, wow! Seeing her happy like that, seeing her run and chase and bring back joyfully, then lolling on the ground, exhausted is nothing short of awesome.

Teaching a previously abused dog how to play has been interesting.

If you don't know Kim's story, read it HERE.

I suppose if I had to pass on any tips, it would be, let them build their own confidence.  Don't push.  Let them find their own ground.  They'll show you when they are ready.

At first, I didn't know what to do with her - she is such a different doggy to all of my other doggy experiences.

All the dogs I have ever come across have been motivated by something; be it treats or toys or whistles or clicks.  They've all been responsive and eager to gain their rewards, whatever that may be.

Kim's just happy that you are being nice to her.

She isn't at all interested in treats or food - I get the feeling that she was a very submissive bottom of the pack, and judging by how thin she was when we got her, rarely ate her fill.

She views the gift of food with almost-suspicion like someone might tell her off or smack her away.

It almost feels like she is scared of getting food, so I'm always very careful in how I offer it to her.  I want her to be certain that it is for her and that she is entitled to it.  She never seems to believe me though.

To Kim, toys were a huge source of fear.  Initially I thought she might have some kind of hunting instinct - after all we were pretty much told that she was used to catching her own food. You know, because they didn't feed her.

'Something that squeaks', I thought.

Nope.  She was terrified.  She hid from the one squeaky toy we bought her.

We spent a few nights in the garden trying to get her interested in a football.  Instead of chasing the ball, she cowered from it.  Our kicking terrified her and she cowered down like we might kick her.

Wary, we tried throwing a small ball to each other, but throwing is basically the lifting of hands, and so, Kim was again scared.  She ducked down, crawling on her belly, pretty much begging us not to hit her.  It wasn't going well. 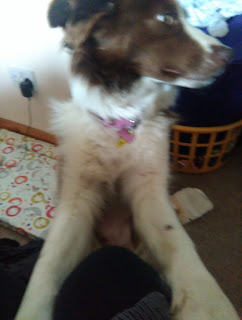 Of course the weeks went on, Kim never got hit by any of us and she was getting used to what to her appeared to be some kind of dream life.

She carefully discovered that she could be petted without having to earn it.

She discovered the joys of meeting other humans and dogs and was taken on long, happy walks in all weathers, off lead and on.

She got to know that when we lifted our hands that it was to peg washing, to dance and to wave - and that it wouldn't end horribly for her.

And that it was nice to interact with us closely, because we would carefully stroke her ears, we would hug her on the couch and we would always reassure her when she was unsure.

Gradually we gained her trust.

Then our next door neighbours got a puppy.

A 13 week old collie pup, who, when she got to come and play over the fence, showed Kim how to play.

She showed Kim how to chase a ball.

She showed Kim that dog toys were in fact for her and that it was fun to run, and throw and chase each other with them.

And Kim payed attention.  She wonderingly learned how to play and stand her own ground and how to have fun. 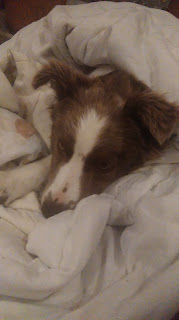 It was so nice to see.

Soon, she was dashing out into the garden to find her ball.

She knew it was hers.

Now she finds her toy and runs to greet it.

She throws it up in the air and rolls in the grass with it.

And she looks so happy. 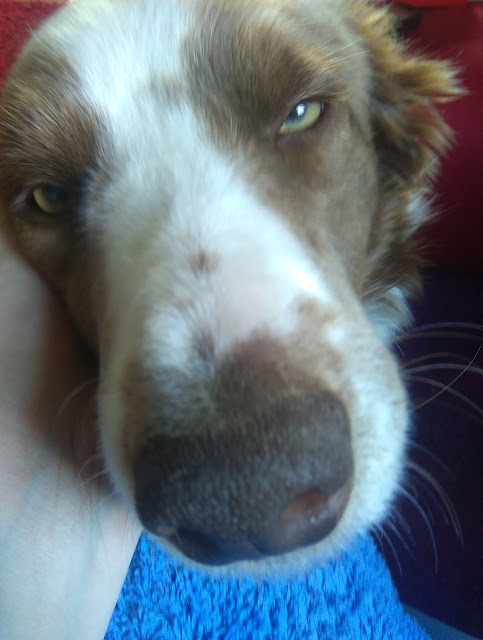 And she lets us join in too.  She brings it to us to play.

It is then that we realise that we haven't just been teaching a dog how to be a dog again, in the nicest possible way, but we have taught her how to trust.

And that we have earned her trust.

And that is the greatest reward of all.