Night terrors are kind of crazy.

For my middle son they happen most nights, about an hour after he goes to sleep.

He always wakes the baby.

They come right out of nowhere.  Some nights he can be absolutely fine.

But most nights he wakes in this howling, screaming, terrified mess.

Hard to believe it, but they are tougher on us than they are on him.

He wakes in the morning with absolutely zero recollection of what has happened.  No awareness.  Just a nice, peaceful night, sometimes with a funny dream. 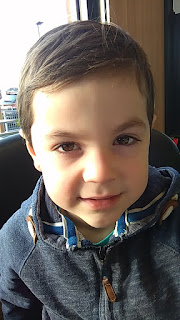 We put the three boys to bed each night within a routine which has never really changed within the annals of time.

It's pretty much the same every night.

It can be time-consuming.

Difficult to put into motion at the end of a long day.  It's important to me boys always go to bed happy.  Always with a hug and a kiss.

However, for poor Ethan, however much we tried, this wasn't always the case.

He may well have no memory of his night terror as they are now, but he used to have other fears at bed time too.

He's still scared of the dark.  He still fears the silence and the darkness around him when he wakes alone in the night.

His wee imagination goes into over-drive. 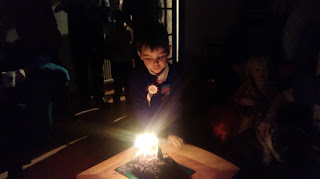 It all started when he was about a year old; the sudden middle-of-the-night screaming, the 'temper tantrums' which we just put down to sheer bloody-mindedness of our 'difficult' child.

He was never easy to put to bed.  He was a handful when he was awake!

But we all dreaded bedtime.

Our eldest son had always gone to bed nicely, easily, quietly.  But not Ethan.

He was terrified of going to sleep; absolutely adamant that he wasn't going to do it.

We tried to convince him he was being silly, it was 'just a phase', that he was big and didn't need us.

We listened at his door as he cried and screamed and pleaded with us to come back in the room until he fell asleep and we tried toughing it out.

We let him fill his belly before bed, we tried only letting him have something small, we tried different diets.
Reward charts.
Incentives.
Books which supposedly hypnotize.

What we didn't know at the beginning, was that Ethan had terrible glue-ear, which was so profound that the doctor at the ENT clinic told us that basically, Ethan spent the first two years of his life hearing as though he was submerged under deep water all the time.

It took until he was two years old to diagnose, and then another year before he would get the grommets inserted, which changed his life overnight.  Suddenly he became verbal, a lot less frustrated and a lot easier to deal with.

The grommets were certainly an improvement beyond everything else, but we still had to deal with the fear and behaviour which comes from not being able to hear properly in those first three formative years.

It's had a huge impact.

He's a great kid.  He is very funny, with a rapier wit way beyond his years.  He is very clever.  But he has struggled.

Hearing properly very much contributes to other functions:


As he gets older he is becoming more and more able. His ability to communicate gets better and he is becoming less frustrated with life, which is great.

He now goes to bed with a lot less hassle.  Well, there's still some, but compared to what we used to deal with, it's nothing really.

We are however, still dealing with the night terrors. The last bastion of sleep disorder hell.

Apparently he'll grow out of them.

I really hope it's soon!