Keep Your Hands Inside The Carriage At All Times: Blackpool Pleasure Beach...(Part 1)


We are not supposed to be holidaying this year.

We are skint.  We are beyond skint.

But when someone gives me the chance to review my all-time favourite place in the whole world so that I can tell everyone how fabulous it is, could I say no?

We are literally just home from one of my favourite visits ever to The Pleasure Beach in Blackpool.

I have been going since I was a wee toot, but there is just something magical about taking your children somewhere that you love, especially when they are both old enough to appreciate the delights for themselves.

We appeared at the gates on Monday, the first week of the Scottish school holidays, and although it was quite busy due to end-of-term school outings and swathes of Glaswegian holidaymakers, it was relatively quiet compared to what it will be like in a few weeks - we literally walked straight to the front of the queue in the very official and efficient ticket office, where we were issued with our wristbands and vouchers for the day.

When I was a wee lassie, you simply wandered around the Pleasure Beach at whim, buying tickets at the booth in either singles or books and they were graded in terms of ride thrill factor (i.e, white knuckle was a couple of A tickets, B for mid-level thrills and C tickets for junior rides).  You can still buy tickets for individual rides, but the park now charges an entry fee of £6 (which includes use of some low-level attractions) and if you are planning on riding at all, you are always much better off buying a wristband, which at £21.99 for adults and £19.00 for juniors is a bargain (when bought online) - especially compared to a lot of other attractions in Blackpool, such as Merlin's recently refurbished Blackpool Tower attractions and The Zoo, both of which charged a fortune!

The Pleasure Beach has certainly moved with the times, and it is simply amazing how many people are involved in just getting everyone through the door.  The huge Ticket Office with multiple queue lines means that you get your tickets quickly and easily, while being given park basics before you set off - a helpful leaflet is available on the 19 rides which children can go on, with or without an adult and you also get a park map, coupons for eateries within the park (of which there are many!) and your park passes, so you can go in and out as many times as you like throughout the day. 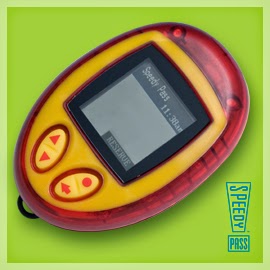 At the entrance you also have the option to purchase a very beautiful piece of machinery technology, which Dave has dubbed 'The Tamagotchi Thing', which is in fact a Queue Bot, called The Speedy Pass.
I highly recommend the Speedy Pass if you are visiting with small children.  There are so many fantastic rides and beautiful rollercoasters at the Pleasure Beach, that it would be rude not to at least try to go on them! We used one, and I have to say that we never had to wait more than a couple of minutes to get on some pretty queued out rides!  It was great and really took the stress out of theme parking for us grown ups.

Traditionally, Dave and I ride The Ice Blast first,


but now that we have two small children in tow, we head straight for the family-friendly stuff, which as a white-knuckle thrill-seeker should kill me a little inside, but in my old age I'm getting all mellow and romantic about stuff, so we head straight for the famous Sir Hiram Maxim's Flying Machines - one of the oldest (if not in fact the oldest) operational ride on the park, opened in 1904.  Rumour has it that Sir Hiram Maxim himself didn't really admire his 'failed invention' and was disappointed at the fact that it was just a 'glorified merry-go-round', but I'm sure if he could see the longevity and joy it has brought to millions across the generations, he would be more than a bit chuffed.


There's nothing like a bit of flying through the air at speed in a captive flying machine to get your day off to a good start!

Next we headed straight to another of my old favourites, and one that I rode often as a child - The Alice In Wonderland Ride.

No, it's not Disney-esque in any way, but it is a really old and much loved interpretation of Lewis Carroll's famous children's book.  I love it because it's never changed - it is well maintained, and I notice a new section has been added to update it slightly.  And a new photo opp outside!

After Alice, we headed over to the BEST ride on the park by far.  IS it a rollercoaster? No!

Is it a static ride?

It's my all time favourite.

Now it's changed a lot in recent years - it was given a gorgeous makeover in 2008, and the original racing mechanism is now sadly locked, but it's still quite easily one of the most underestimated joys of theme park revelry.


Proper horses which race very fast on a carousel to the tune of a mini wurlitzer type organ, which is really fabulous.  The tune playing when we were on this time was 'Walking On Sunshine'.  Perfect! 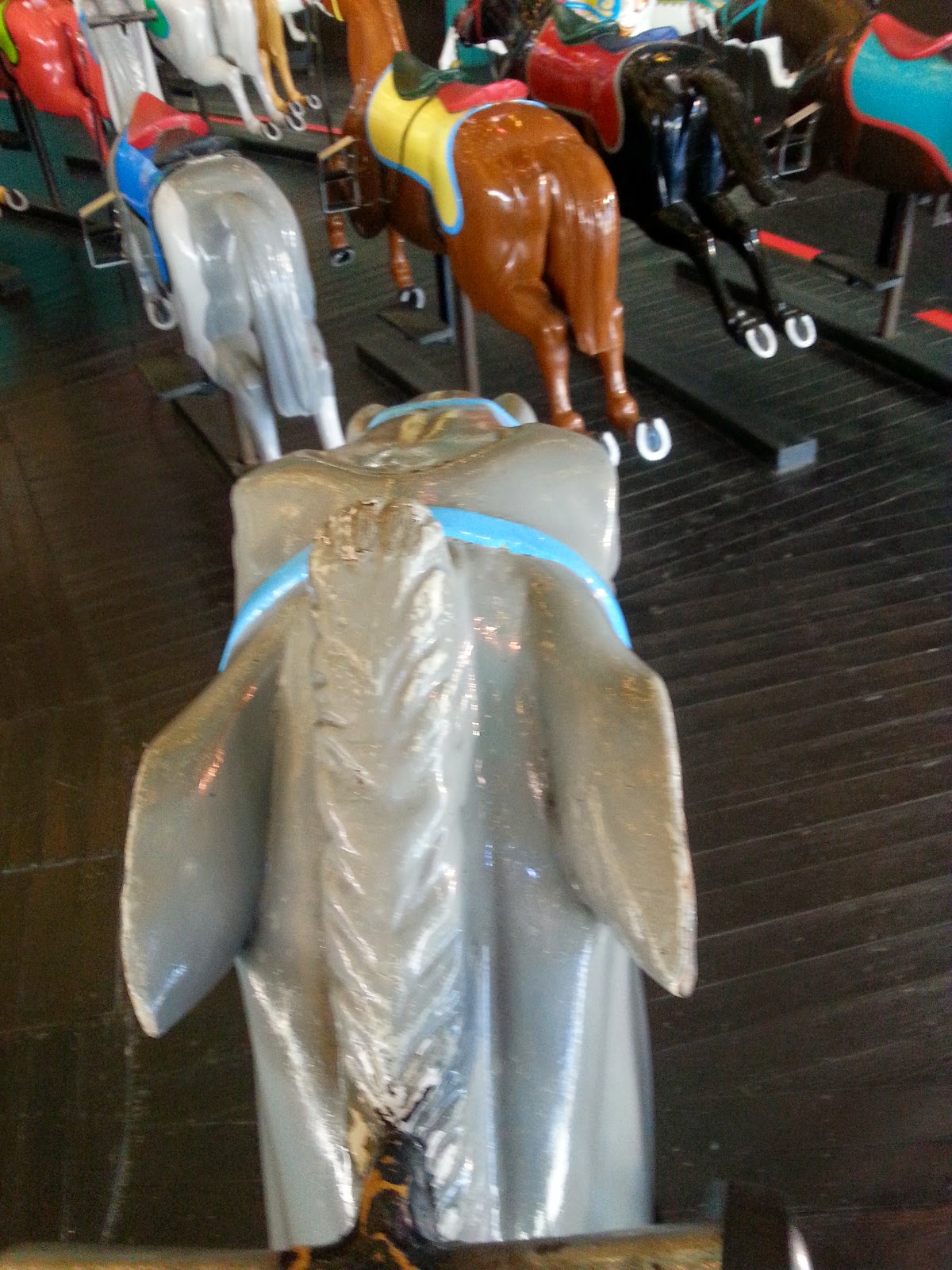 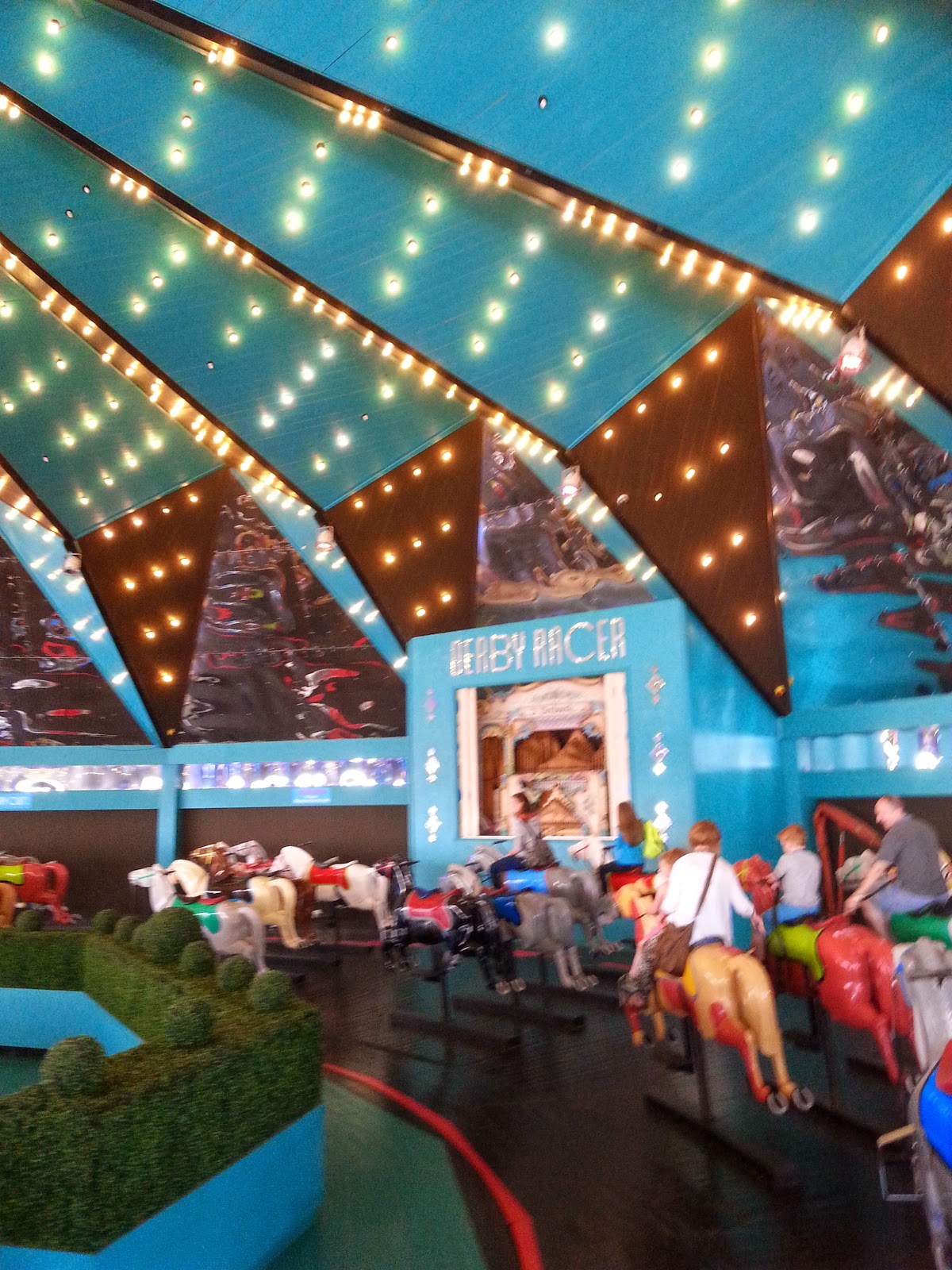 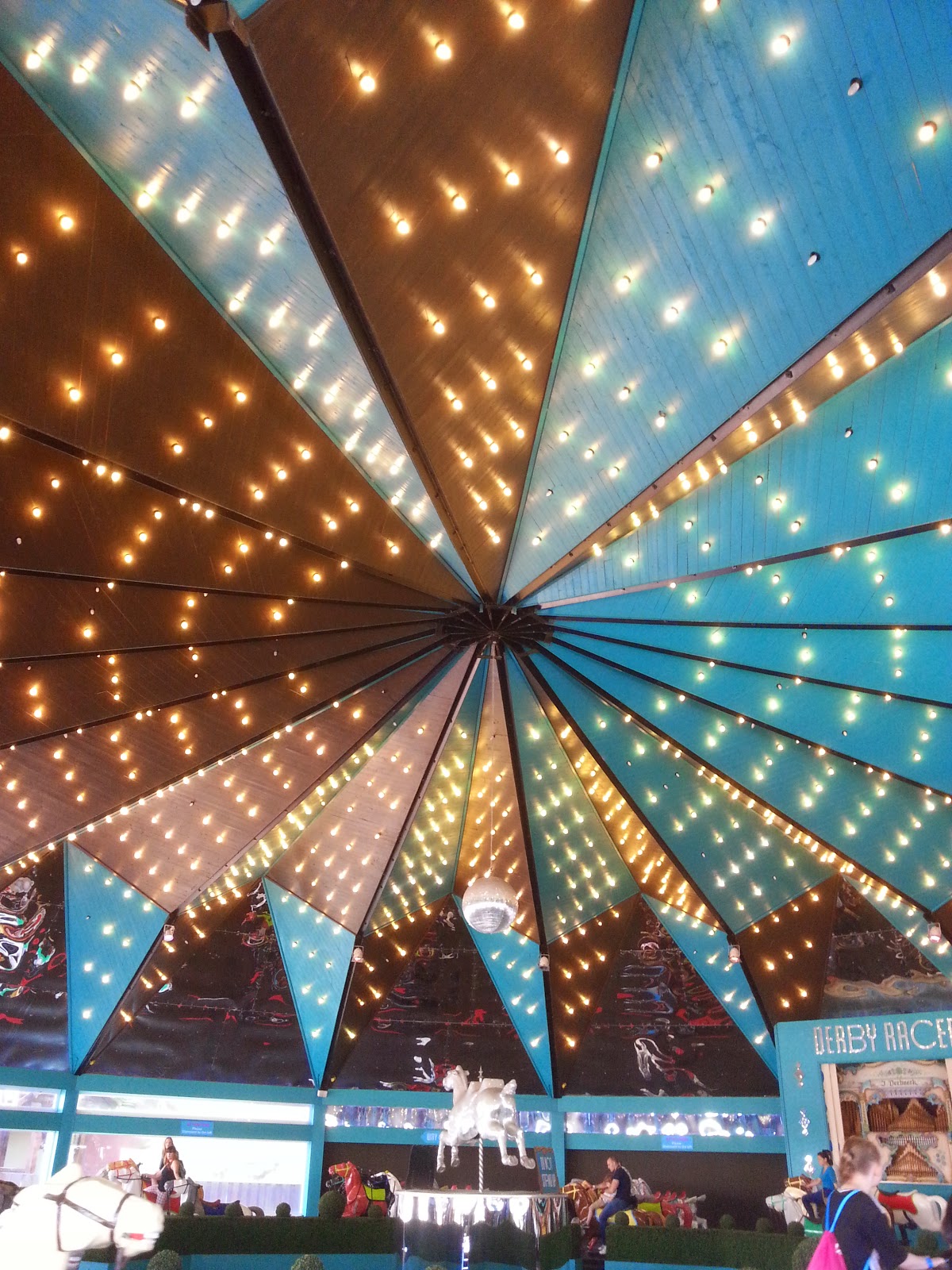 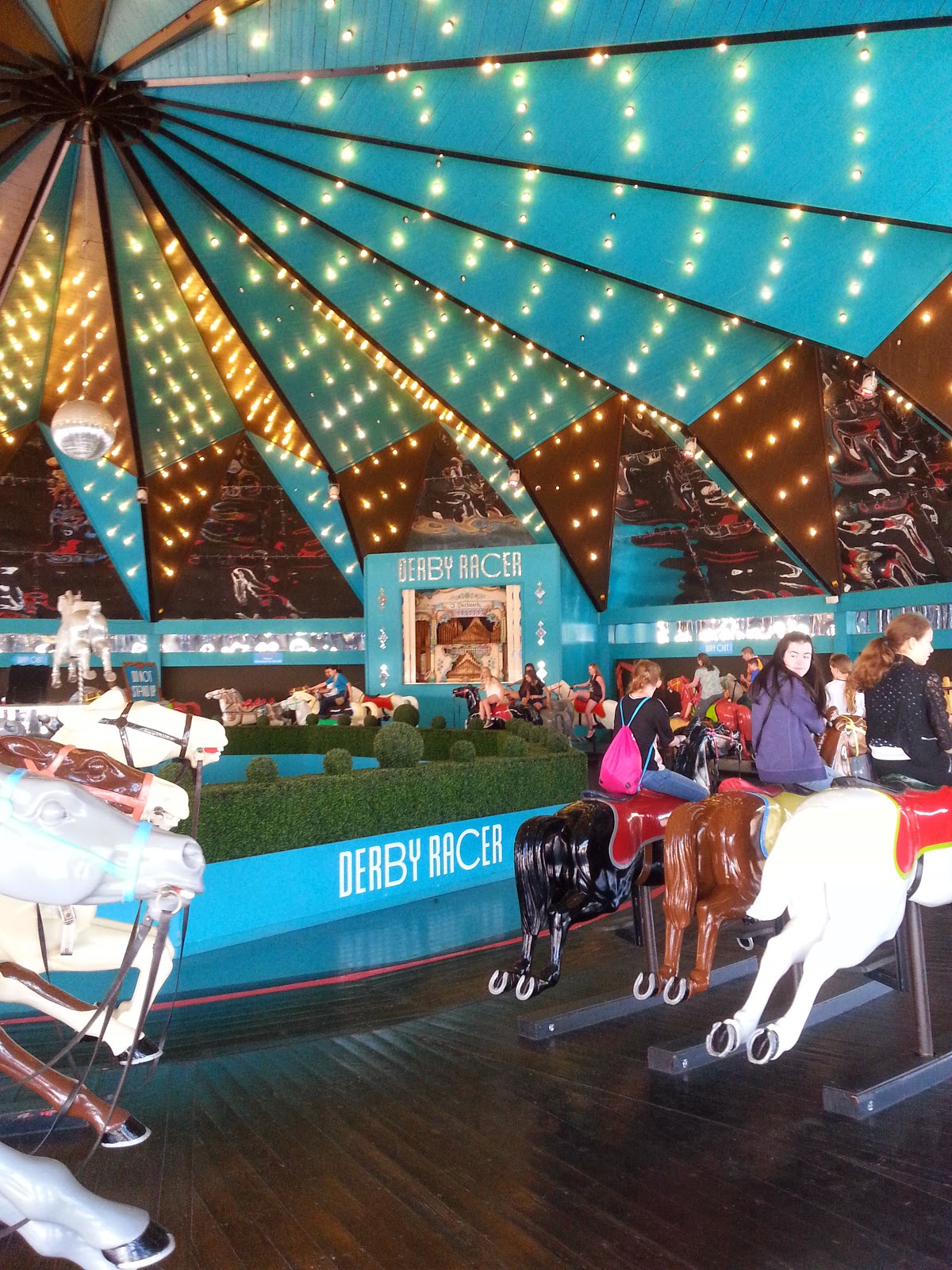 I always do a full blown grin with teeth and everything when I'm flying around on this one.  I always feel like time could stop and I could ride it forever - it's everything to me.  It's like time stops and I'm 5,6,7,8,9,10 again!  Amazing!


After this, the kids were antsy to get going towards Nickelodeon Land...so off we went! 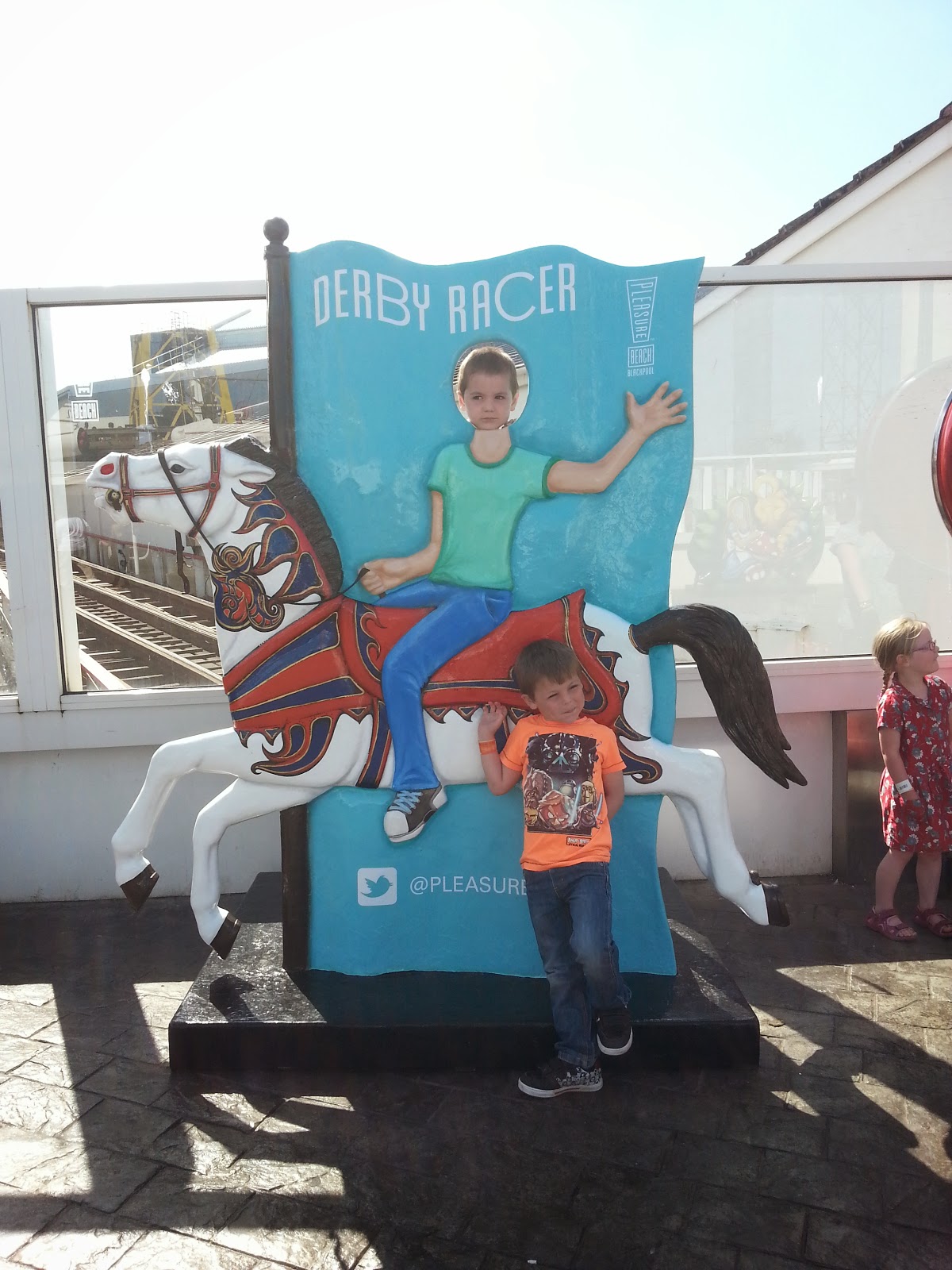 I practically skipped along the path and up over the bridge as I passed all of my old favourites in the bright sunshine!

What a lucky, lucky day!  To be continued...