I think I'm supposed to be showing you how awesome my kitchen is, and how it's the heart of the home and all that jazz.

I'm almost completely sure that I am supposed to be telling you how my family and I spend loads of time in here and we love it and I love the view I have while washing my dishes and stuff.

But, I'm not going to do that.

But seeing as you're here; here's the Grand Tour.

First up is my beautiful Stick Bouquet.  It's better than flowers y'see, because, well, they don't wilt.  And you can pose them quite well.


﻿﻿﻿
Some mothers get flowers.  Some get a nice collection of hand-made gifts.  What do I get?  A new stick.  Every time they go out.  It's nice that they think about me while on long walks with their dad, but it's getting to the point where I'm not sure if it would be okay to, er, put them back.  Carefully.  Outside.  So the, er, animals and stuff can enjoy them again...

We rent our house.  It's a lovely house and we love living here, but it is just a small flat and hence, the kitchen, although big enough to suit us just now, is quite small. 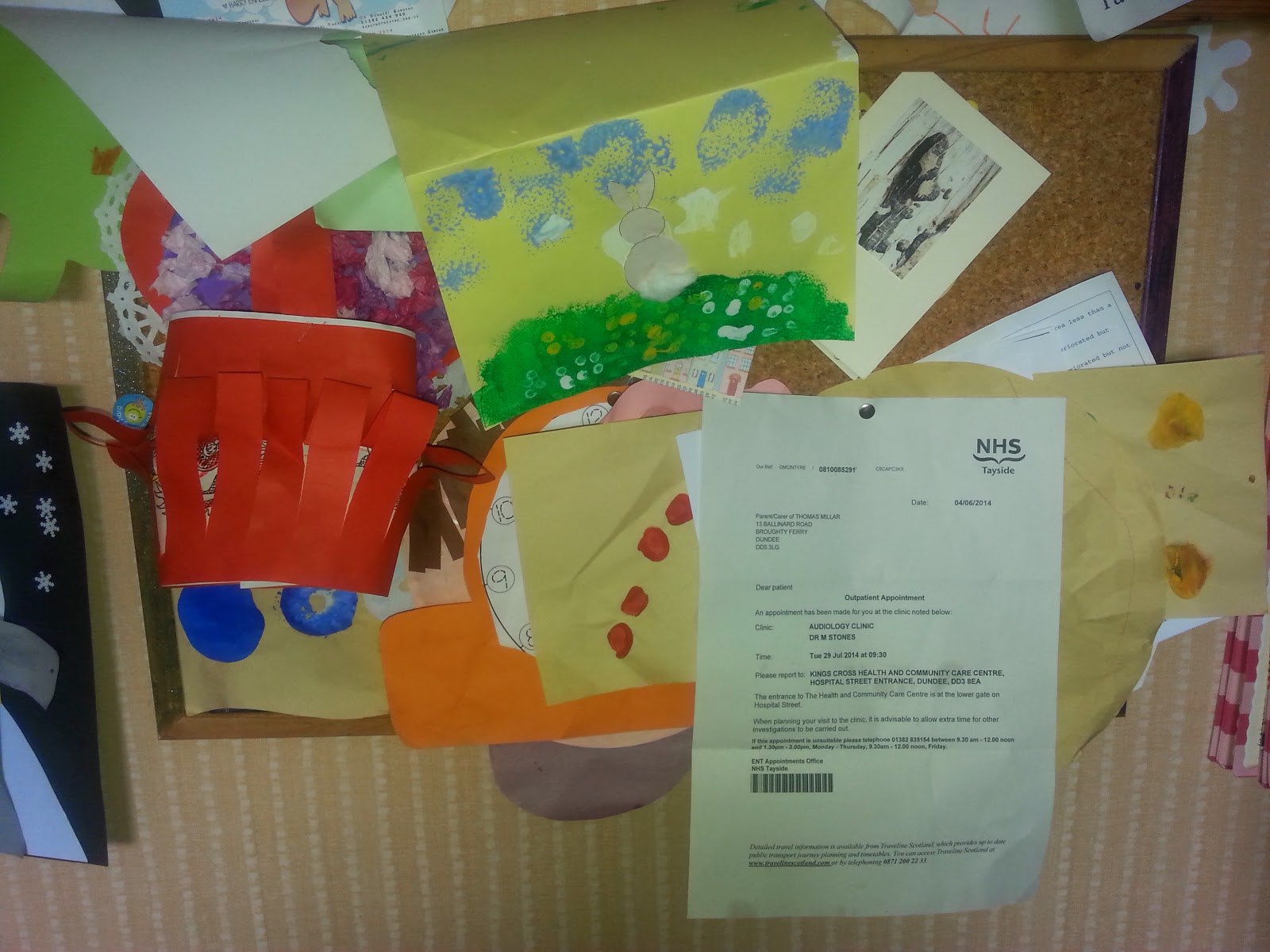 We've had some great kitchens.

We've had some truly awful kitchens.

This one sits high on my list - it's clean, it's safe and it doesn't have scary electrical problems or gas leaks, so I'm happy.

It is very very small though - no dining space - and depending on the state of my washing situation, not much room to move in.  Two people can cook alongside each other as long as you claim areas of space first.  And don't get annoyed easily.

I've learned over the years how to make a house your home when it's not really your home.

I love little bits and pieces - like postcards and the boys' art.  We currently have a couple of noticeboards up on the wall (one of the stipulations of renting is that we cannot put pictures up),and they are great for adding personal bits and pieces to - a top tip for those who rent!

It can look quite messy, so the trick is to keep one for 'Things To Do' and the other for rotational art - but as you can see, it doesn't always end up that way!

I also love to stick up personal mementoes.

This one looks a bit scary - and it is!  Caravaggio's Medusa on a shield is terrifying in real life.  I was really taken with it when I saw it in The Uffizi in Florence.  Unfortunately, we don't have any space for a full print (plus, I'm pretty sure a large one would scare the kids!), so Medusa sits on my own part of the pinboard - you know, accenting my day-to-day feelings about general housework and stuff.I like to think of her as a kind of 'warning' sign.  A friendly, arty one.  Plus, it reminds me of what holidays were like before children.  You know - relaxing and stuff.


I also love to collect funny newspaper clippings.  Our local paper sometimes comes out with some proper clangers, so it's always amusing to hang onto them.  The one above doesn't look as though it would be funny - but the way it's written is just amazing.  I don't know if this was the author's intention, but 3 years on, it still makes me giggle. 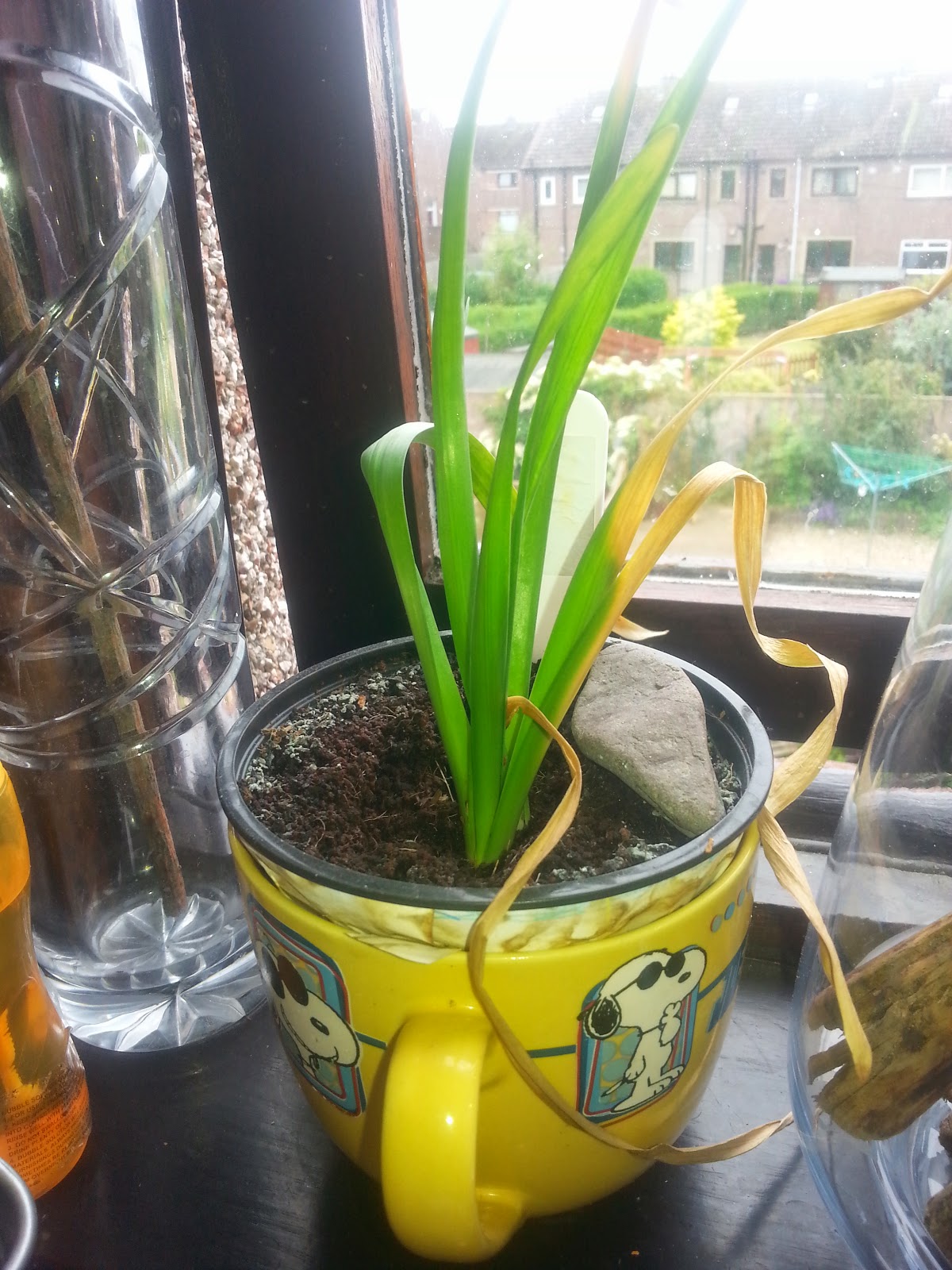 Next up on the grand tour, next to my beautiful collection of woodland detritus, is Tom's 'Pot of Hope'.

Originally gifted to him at school with the idea of raising funds for cancer care, 'The Pot Of Hope' was supposed to be watered every so often until such time as it would produce a flower which would dance joyously in the wind.

We're still hoping that 'The Pot of Hope' will yield some results, but to be honest, it's not looking likely.

I don't have many collections (contrary to popular belief), but I do collect something very useful - cups!

I love a good novelty cup! 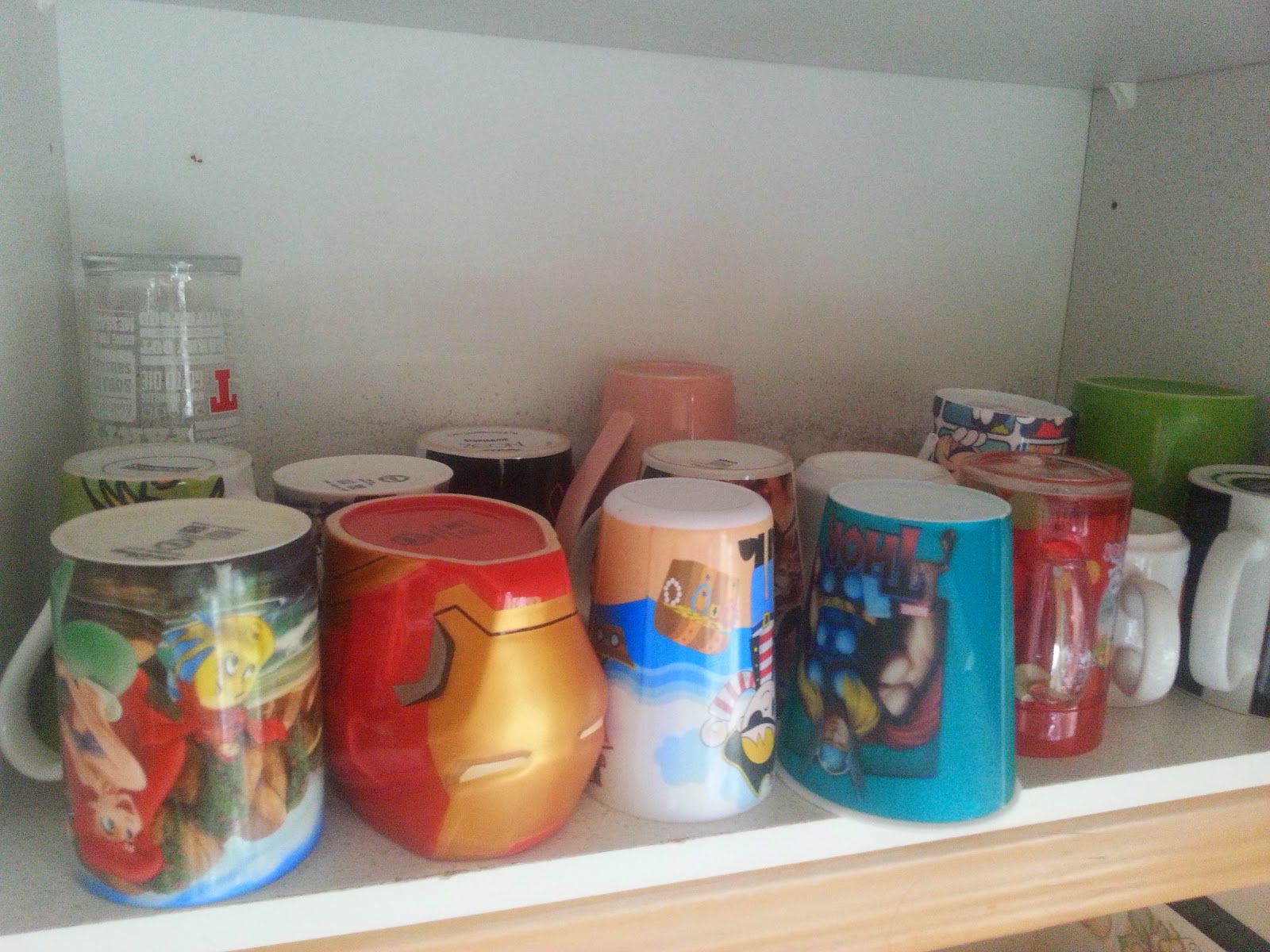 I'm kind of running out of space to put them all, so I'm currently looking into thinning them out a bit, but it is tough!  I like to keep them clean with Fairy Platinum - keeps them lovely and fresh while protecting the motifs too.  Very important - especially for my older two cups (I've had them since I was 3!) 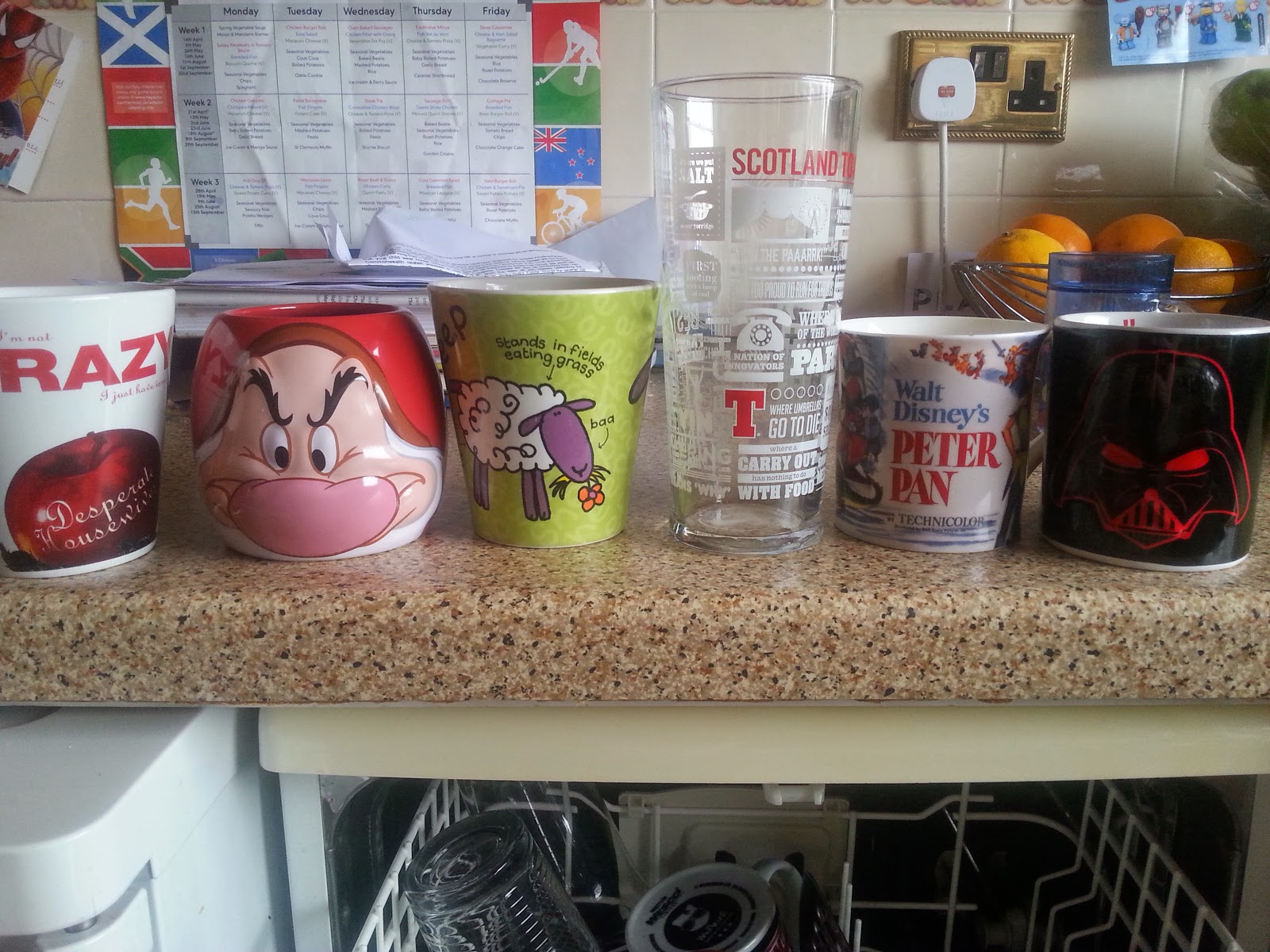 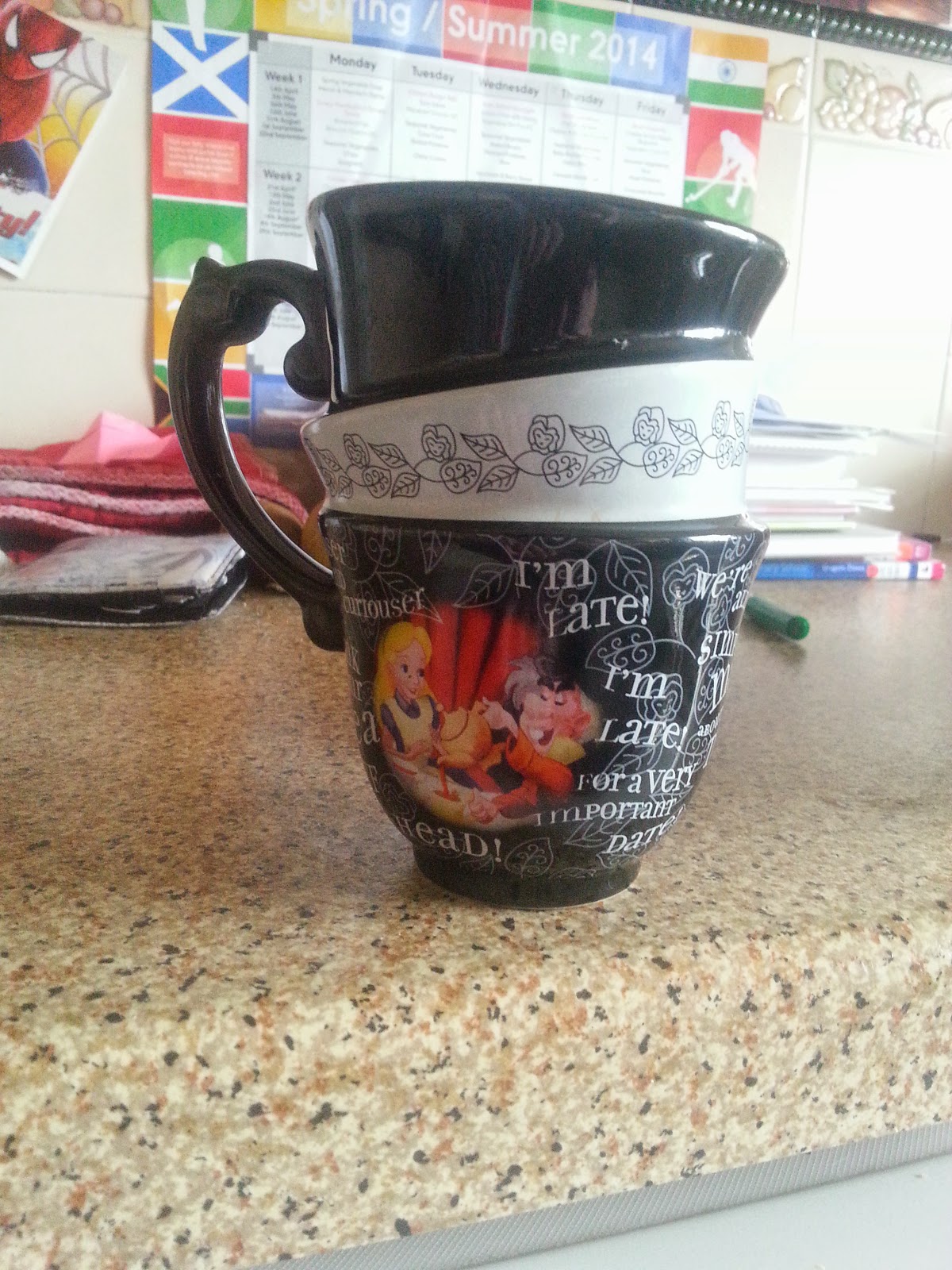 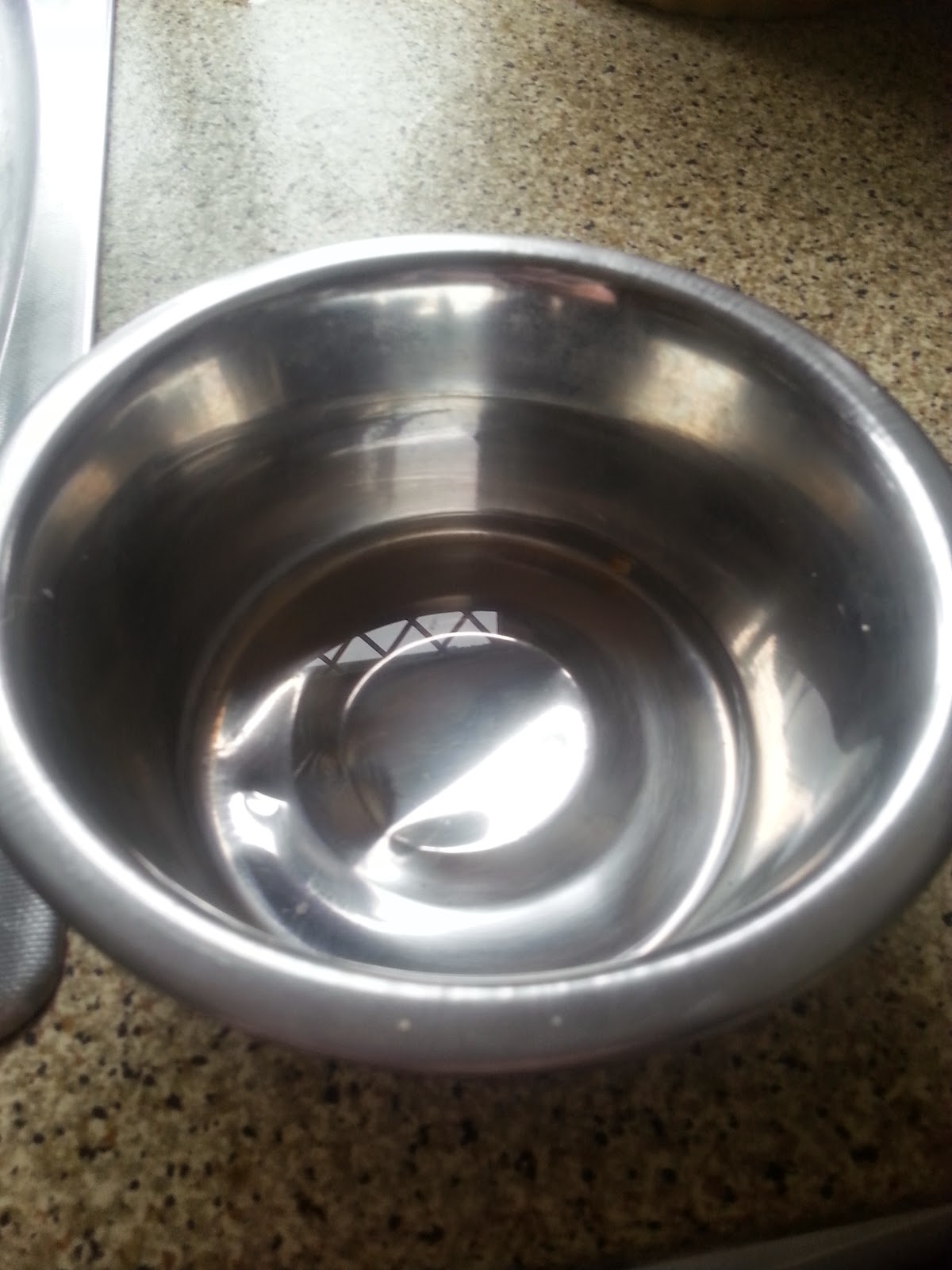 What's not so cool is the amount of times we all trip over the dog's water dish in a day.  I'm surprised the dog ever has any water to drink! 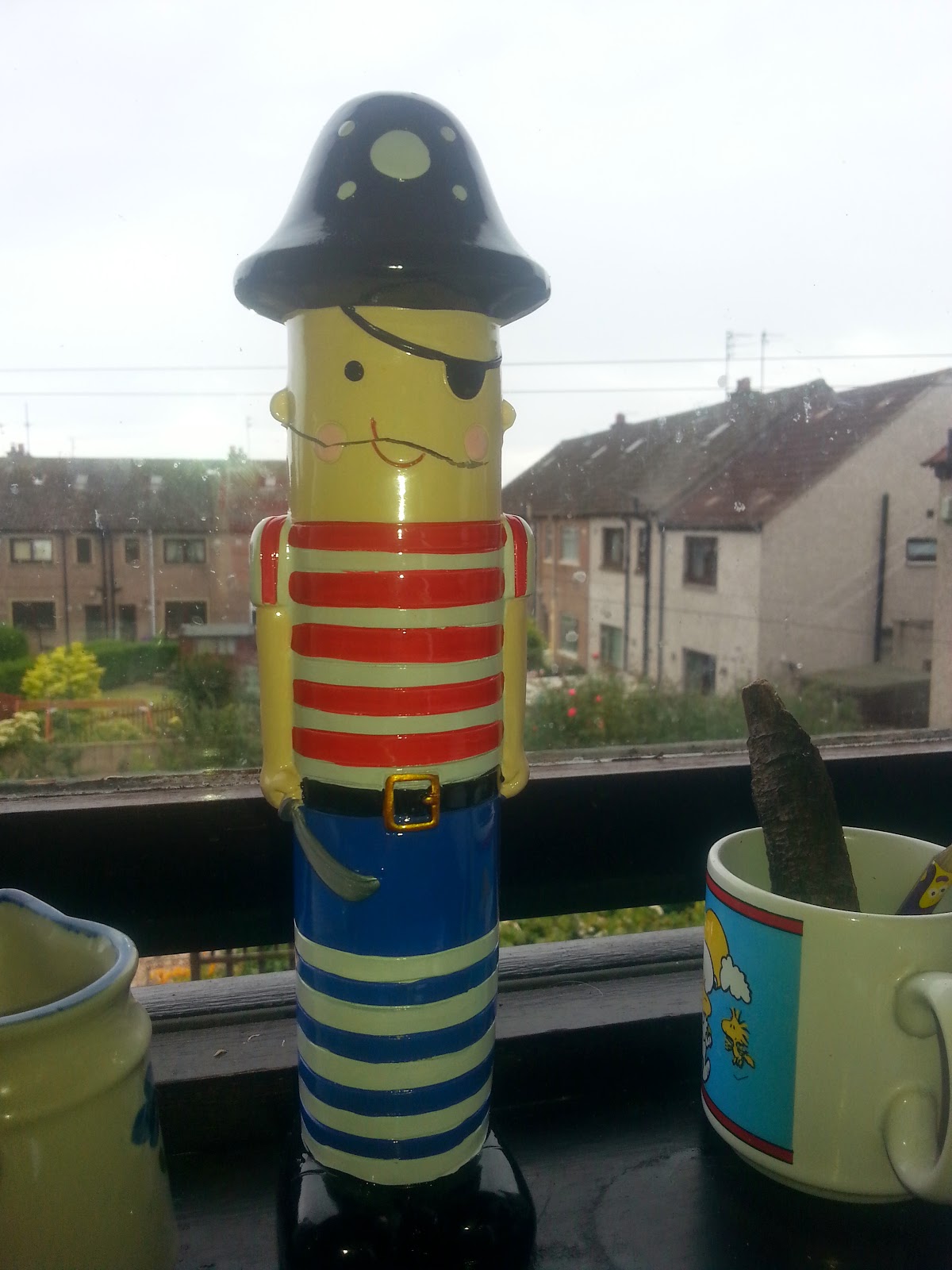 The kitchen is also the place where broken things come to die before being thrown unceremoniously in the bin at random intervals.  An example of such a candidate is this gorgeous Pirate Bankie which Ethan got for Xmas.

I told him to be careful.

Also, I have become acutely aware how stuffed with rubbish my kitchen is after being asked to give you all a wee tour.

Does everyone have lots of random stuff in their kitchen, or is it just me?

I'm not sure when I'll ever get around to using my champagne flutes in a vase.... 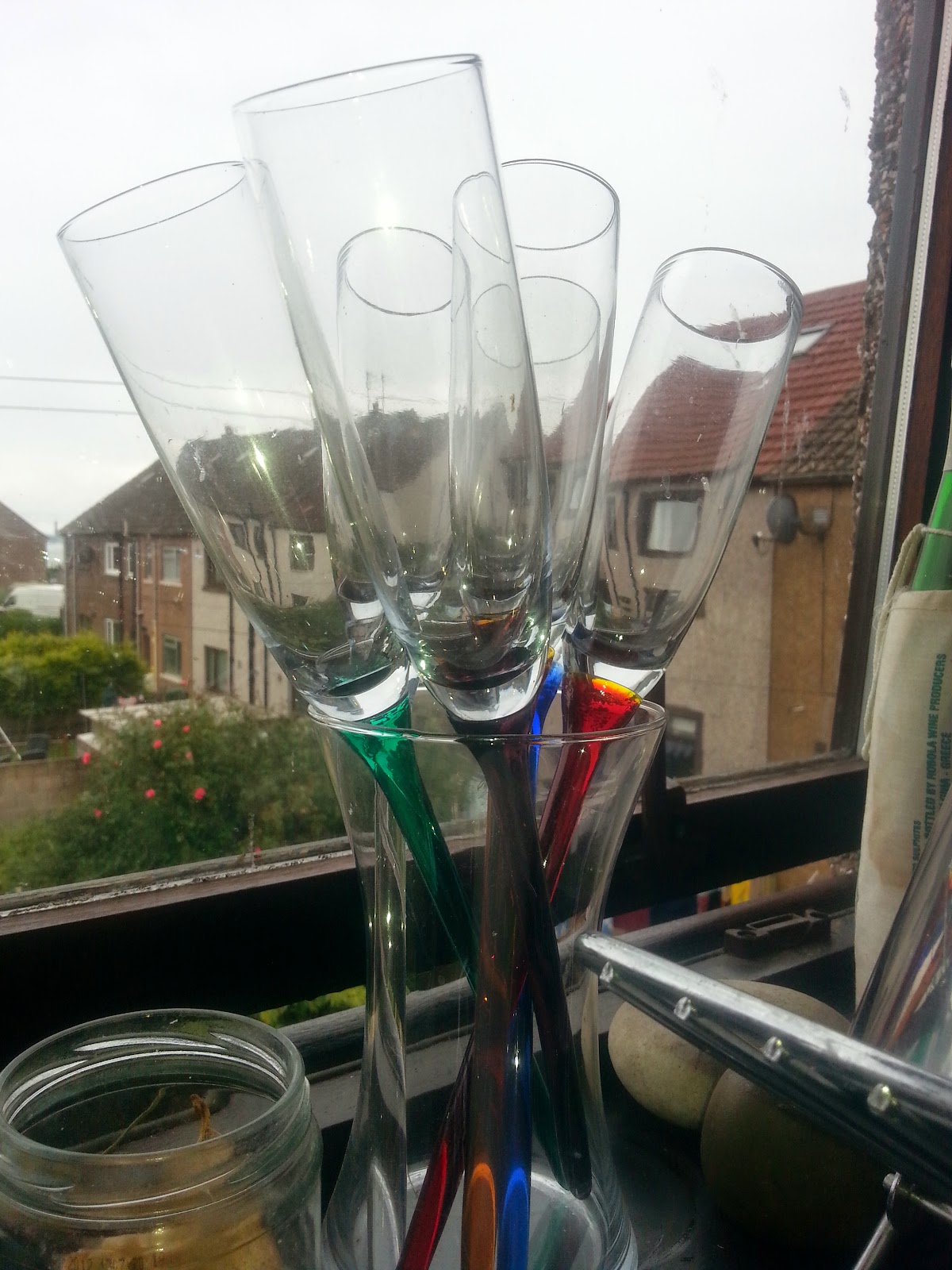 Or even why I am holding onto wine bottles for nearly 10 years... 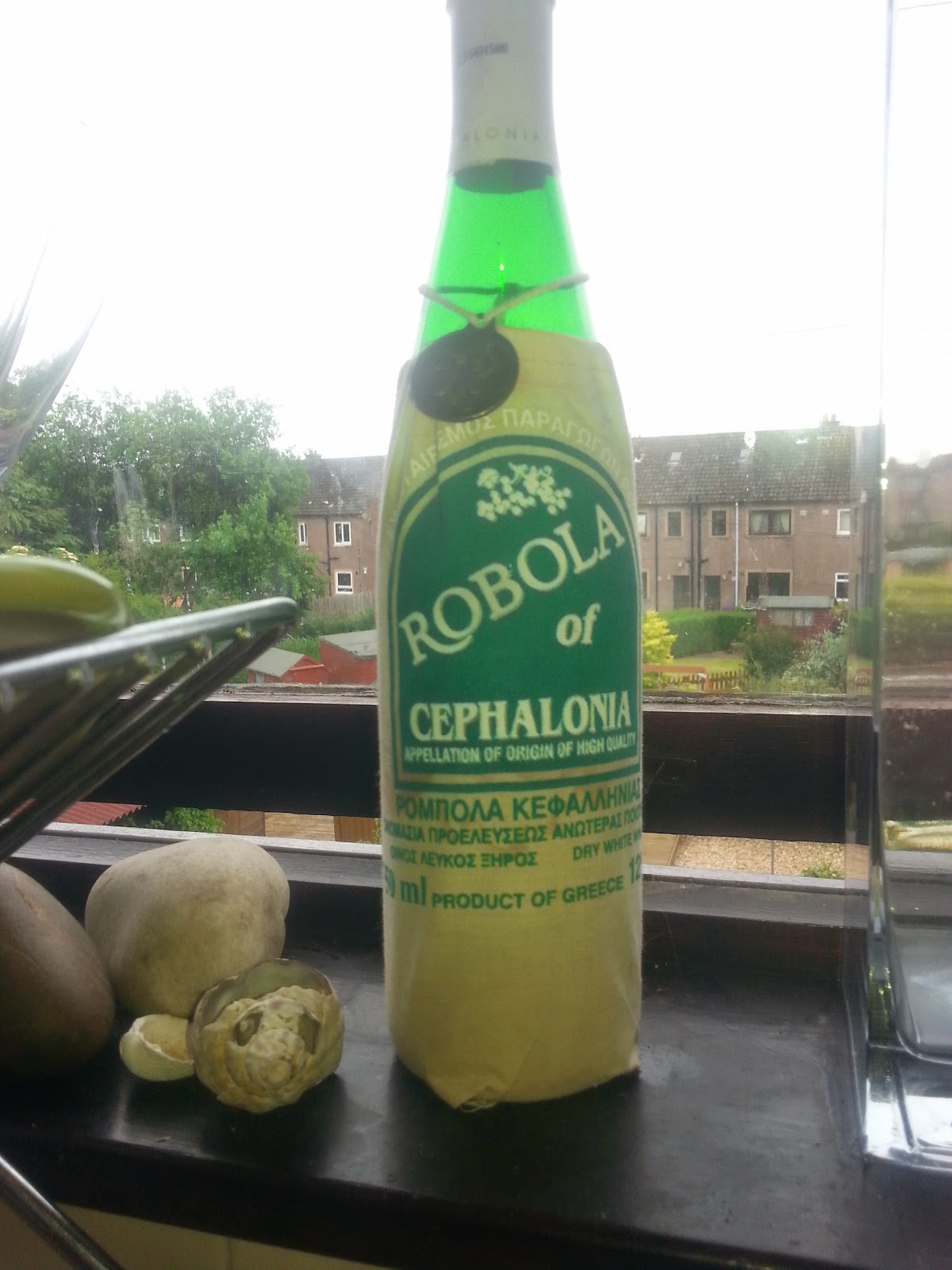 As I said, it's nothing much.

*shoves you all out of the tight doorspace*


This post is an entry for the “My Kitchen Story” Linky Challenge, sponsored by Fairy Platinum  Facebook.com/fairydish 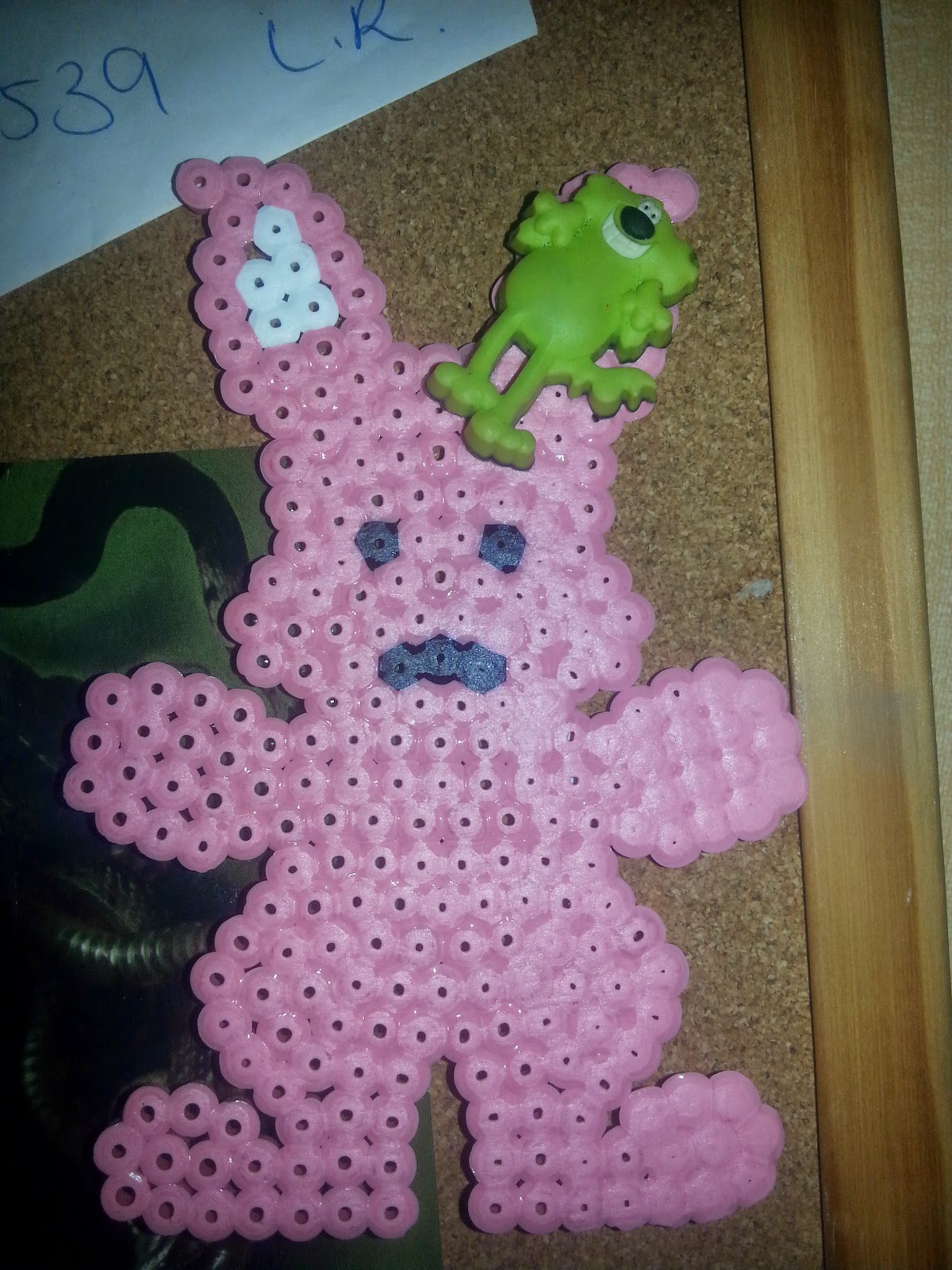