With less than a month to go until the Scottish Referendum on Independence, to determine if our strong, characterful nation is strong and characterful enough to go it alone, tensions are high in and around the country.

Every newspaper, every media outlet, and most importantly, everyone at work, in the playground, on the radio, on the television, on the doorstep, on the high street are all debating the ins and outs of independence.

It's an emotive and passionate issue from a very emotive and passionate people.  Never before have I seen everyone so interested and outspoken about their own political beliefs.  It's amazing to see people who never previously bothered to look beyond the ballot paper finally getting to grips with the state of their own country; assessing it, casting a critical eye over what is actually happening in the day to day lives of the people around them.

And that can only be a good thing.

Without going too hard and heavy with the political reasoning behind my decision, I will openly say, quite proudly, that I will be voting a strong YES on September 18th.

You can all read for yourselves about the various issues and arguments surrounding currency, economics, etc. etc.

My reasons for voting YES are very personal.

Ever since I was wee, I have always been very aware of my standing in life.  There has always been a class system, as far as I am concerned.  I was lucky enough to live in a well off area, among some very nice folk, who were all very well off themselves.

I was brought up in the fancy, upper/middle class area, where people lived in big fancy houses and mummy and daddy had a car each.  They all shopped at Tesco, and on their 17th birthdays, some of them even got some pretty sweet cars, or, were insured to drive their parents' cars.

Our school was one that aimed high, that presumed it's pupils would have fabulous Higher results, that they would go to University straight from a well-run sixth year, into Law degrees, Medicine degrees, or find themselves on Gap years.

Me?  Well, I was never meant to be there. Not really.

Mine was a circumstantial nice life and I never really fit into it.  I found my niche of course, I found it outside of school altogether, and into outside drama clubs and musical theatre societies, where I mixed with kids from all over the city, with whom I felt a hell of a lot more comfortable.

I was only in suburbia because of two factors; my mum was a single parent and my grandparents lived there.  We lived there to be close to them, and the schools were decent schools.  It was a good fit.  It was safe.

I still didn't fit in though.

Mum being a single parent and a carer for our grandparents meant that our family very much relied on benefits while we grew up.  My school uniform was bought with vouchers which meant we always got the cheapest and best, and these stopped when I was around 16, so after that I used my money from my job as a weekend waitress at a coffee shop, my £2.50 an hour, to buy myself some uniform so that my Mum didn't have to find the money.

The stuff I used to hear in the playground about benefits and the people on them too - things that had obviously been learned from parents and handed down statements:

'Scroungers'
'Lazy people on benefits'
'Get a fucking job'
'Useless'

And, well, you know the drill.
There's nothing like a dose of that now and again to make you feel like a worthless, lazy, scrounging, useless bastard, no matter how many fake Tommy Hilfiger jackets you wore to school (yuck) or how many weekends you'd lost to working since you were 13 years old pouring coffee to discerning old ladies (man, were they discerning!) for a pittance.

We shopped at Kwik Save for puffy crisps which were more air than crisp and shampoo that smelled like grapefruit, but would stain the grout of the tiles in the bathroom if you got it on them.

I had to hide the fact that I received (very, very, gratefully) my Education Maintenance Fund (EMA) which allowed me to buy shoes and stationery for school. While my peers shopped in the finest boutique stores, spending hundreds, carelessly on their Final Fling (Prom) dress, mine came from a charity shop (quite rightly too - what a waste of money that would have been!).

I was never ashamed, never really bothered, but I was quite pissed off by the comments, the wee jibes, the pokes in the ribs that weren't exactly aimed at me personally, but certainly people like me. My pals and their pals would mouth off at a moment's notice about scroungers on benefits, who were lazy and useless.  They'd see me grimace and say 'oh, but not you - you're not like that!'

I understood where they were coming from though, even if I didn't agree.

We weren't especially well off, we were definitely the 'have-nots' in a land of 'haves' but we didn't struggle like a lot of people did.  I was very well aware of folk who had it worse.  Oh yes, there were a hell of a lot of people who couldn't afford the gas for the heater or the nice insulating plastic for the windows.  And damn, if it was cold in my house, it must have been bloody freezing in theirs.

I hope you get the relevance of what I am trying to say here - but I suppose it was no real coincidence that every time there was an election, even as a wee lassie, I noticed the politics.  I noticed them, because my family were not from these parts and my family were affronted.

We lived in an area that voted Tory.  They had their blues in their windows, proud to be 'Conservative'.  They were older, and they did not like change. My family, like the families around me handed down to me their own narrative, and yes, it was extremely anti-Tory.

The Tories vilified single parents - mothers in particular.
The Tories abhorred those on benefits.
The Tories did away with public services (in which the majority of my family worked).
The Tories like hunting.
The Tories took away things from the education system that couldn't be replaced.

Conservatism was a dirty word in our house.  No change meant no future, no equality.  It was 'jobs for the boys'. It was no higher education for people like me. It was the closure of mental health facilities where my family worked and my grandad was resident. It was the cutting of benefits which meant poor food, poor nutrition, no chances.

Yet they got in every time.  And if they didn't get in, it was the SNP.  And the SNP were viewed as a Scottish Tory in our house - the affluent folk around them, when they thought they were branching out a bit voted them in time and time again.

I have to say here, I was wrong.  I have never been more thankful for the free education I got at University AND College due to measures created by the SNP. I am so very grateful for that.

Maybe if my grandparents were alive now they'd bear it enough to thank them for that.

A lot has changed in the last 10 years. Devolution has meant so much to us as a nation; a parliament, power, free education, the ability to offer free NHS prescriptions.

But now the opportunity has come for us to have so much more, and damn, I am all for taking it with two hands.

And, oddly, I'm feeling rather warm towards SNP for the opportunity.

Even if I will still probably never vote for them.

Nobody in this lifetime (unless comfortable throughout) will forget austerity or recession or food banks.

If you have no idea about people on welfare these days and the amount the actually get and what they actually have to do to get it, please, please educate yourselves.  It's unbelievable.

If you think that is an easy way of life, you are very much mistaken. If you don't know, you've been too damn comfortable. Lucky you. 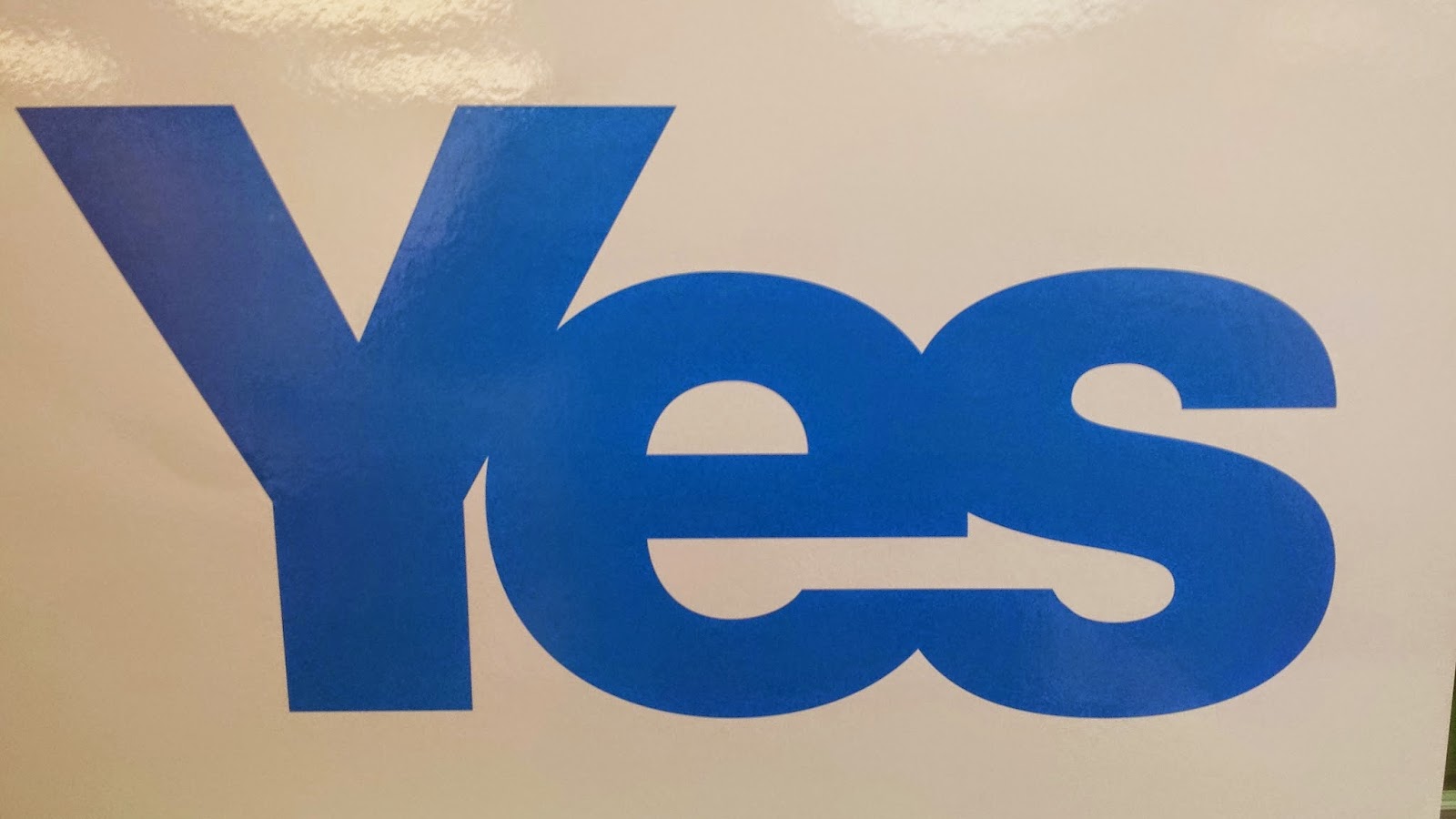 What I have seen more and more, is that I am not alone. Every bugger that displays a Yes is a bugger who's struggled, is someone who has rallied against the status quo and been shoved down, is someone who has felt that inequality and the sharp jab in the ribs every time they've put their head above the parapet.

I am lucky enough to work in a public service, and I see every day, first hand, the immigrants, the migrant workers, those on benefits, the drug addicts, the grannies with their grandchildren who would otherwise be in care, the budget cuts and the engineers who can't even get a job in McDonald's. They struggle like you wouldn't belive.  And they might be whatever to the media and whoever else, but they are all people and they all have a story and they all have a life, just like you and me.

Myself and my own family now - we struggle.  We are both in apparently well-paid and responsible, graduate jobs. We don't do a food shop every week because we cannot afford to.  Sometimes we can't take the car because there's no money for petrol. Sometimes our last pound in our pockets is really, genuinely all we have.  We have spent a lot of time recently gathering up our old clothes not to hand in to charity shops, but to sell for an extra £5 to get some basics. We rifle through the kids DVDs and our old jewellery to sell it off to pay a bill.  We struggle a lot. And we are not alone. And, if we  are struggling, how is everyone else on less than us coping?

There are so many people out there who feel a change in the air and want to embrace it.

It's a negative. It's fear.  It's war and nuclear arms that we don't want or need apart from in some kind of horrific 'end-game' scenario. It's a continuation of the same. But maybe worse. With little to no say.

Yes is brave.  Yes is fed up of struggle and fed of of being turned down.  Yes is a pride, a balance, a strong positive.  It's not a maybe. It's not a can't or a won't. It's a knowledge that things might be tough for a bit, but it's also a 'fuck it - things are already tough'. It's a 'let's struggle through together and be the best we can be.'

It's work, yes, but man, I am NOT afraid of hard work.

I have never been able to afford that.

I'll leave you with what Dave said tonight.  He said:

'If we don't get a Yes vote, Scotland won't be a country any more.  It will always just be the idea of a country.'

And you know what kids?  There's a heck of a lot of truth in that.