I've been on annual leave for a week and I don't want to go back to work.

Work is stress.  Work is trying to figure out the impossible with both hands tied behind my back.  Work is unfriendly. Work is crumbling and broken and needs so much more than little old me to fix it.  Work is constant criticism, and juggling, and managing time I really don't have.

Do I have to go back?

I keep having mini-stress attacks; my heart starts rushing, I get the sicky feeling in the pit of my stomach and I can feel my adrenaline starting to course through my veins in fight-or-flight; a response which is unwarranted (as I keep having to try to tell my brain, which seems to want to do anything but be calm about all of this).

I'm worried about so much; taking myself off social media so that I wasn't tempted to look at anything work-relates mid-week has the downside that now, as manager of this service which is supposed to deliver STUFF in the next few weeks is making me feel very disconnected indeed.


What am I going back to?

What has or hasn't been done?

Will I be surprised (pleasantly or otherwise)?

We've had a lovely week.  We took a much-needed trip to St. Andrews together to look at bookshops, eat Italian paninis and indulge ourselves with rich cake.
On Tuesday we shopped for new flooring and started some DIY.
Wednesdy was the day we built a kitchen unit - finding (unbelievably) a piece of worktop in the garage so perfect, that we didn't have to cut it.
Thursday we wenyt shopping and had brunch at Wetherspoons, enjoying our child-free time.
On Thursday I also had to sit and pay the wages, which took a few hours.
Friday, I had plans with a friend.  Calamity Jane at the cinema in Perth, followed by lunch and a spot of shops.
On Saturday, the dread began....so close to Monday.  My girlfriends had plans to go out, and I guiltily held back until committing myself to go about and hour before we were due out.  I could quite happily have stayed at home - the thought of work starting made me feel sick and depressed.
I made plans to come home - I didn't want to waste any of my last day making my way home from a night out.
Today I woke up and it was sunny.  Really sunny.

I was a little hungover from the night's ablutions, but I was keen to not waste the day.

Suggestions of going out - it's a sunny day, we should 'do something'.

I stepped into the garden to take the dogs out...windy, cold...nope.

I came back in - "we can go out, but somewhere inside please".

Hilarious.  The boys loved it - all three.  Tom was his usual uncoordinated self - he made Bambi look like a tightrope walker.  He refused to hold onto the side and instead spent most of his time crashing into peaople, the floor and doing his best pratt falls, which meant he garnered huge sympathy from pretty much everyone, who then tried to help him, which was really nice.  He bumped into loads of school friends and they were all great, giving him little hints and tips.

Ethan gingerly stepped onto the ice and then slipping too much, he pulled himself back into the hole he came out of...hilariously, comedically.  He soon got the hang of it though!  He was proudly stumble-skating around and even remarked 'I never even cried once, mum!'

Owen had a penguin, but struggling with the concept that the blades he could barely walk on on firm land would work for him on this new slippery terrain, he wrapped his legs around said penguin, and waited for it to move.  Of course it didn't.

He then proceeded to do 'snow angels' and holding onto the penguin, dragging his feet while waiting to be pushed.  One woman had been round twice and asked if we were okay - offering to help us off the ice, as he just stopped point blank.

Having had 3 c-sections, my core isn't what it was, and my balance was completely out of sorts - I intend to rectify this asap.  I properly struggled to find my centre - it was quite disconcerting and debilitating for someone who was quite balanced before.  I'm really keen to sort it out!

The boys really want to do more, so I think we will take them to lessons every week.

Which are pricey, and something we could never even begin to contemplate before.

But now am earning a much better wage, so....

You see what I've done here?

It's been more than a while, so I suppose I'm just going to blether a wee bit.

I left my job at the library.

I have however embarked on a new adventure and am now working as a Project Co-Ordinator for a community project in Dundee.  It's a bit scary - people say things like, "ask the boss"  and " my manager" while referring to me and I am now accountable for things like paying the wages on time and making sure that there's funding available - as well as everything in between.

It's been a bit of a chaotic and rough ride so far - it's a small project and there's been a lot to do - and will be for the forseeable.

Someone told me that I should keep a list of successes.

So, for posterity, I am reminding myself that I can be successful sometimes.

It's far too easy to rest on the negatives and important to remember how much I have done in such a small space of time with it so far.

Fingers crossed it continues and that I don't die for some kind of stress-related illness in the interim. 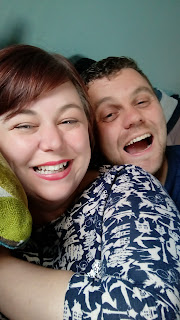 It was fun, but kind of all-consuming.  It's really nice not having to constantly panic about doing daft things like risk-assessing my own house daily.  My whole house is one big risk and actually, it's a lot better for everyone's health if I never have to think too hard about it.

The house is coming on, if albeit a bit slowly.  We are finally getting somewhere with the dining/kitchen thing, and slow improvements are being made.

It's very very difficult with two full time jobs, three kids and two dogs to get anything done quickly! 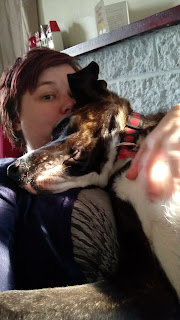 There's always someone who wants to sit on your knee.


The kids are all good.

Tom is older than I ever wanted him to be - he will be 10 this year and I'm starting to see wee bits of 'teen' in him.  He asked for deoderant, has started 'doing' his hair and has stopped taking any real interest in toys and so on, favouring computers, gaming and anything Mario.  Which is cool.  I kind of always imagined my son would be into all of this stuff.  He has stopped reading so much, which is frustrating - I thought I had him!  But hey, he's replaced it with being a coding wizz, so swings and roundabouts!

Ethan is Ethan.  He is getting a little bit more savvy.  He is full of personality and has such a funny sense of humour - sometimes a little bit older than it should be, but we'll blame his dad for that!
He's figuring out the world at the moment and it is as complicated, scary and worrying for both of us I think.  He has such a literal point of view which can cause him so much anxiety, but he is getting there. 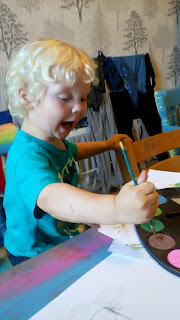 Owen - well, where do I start?  He's so chatty, so funny, so full of energy.  A definite character and going through some kind of oedipal stage at the moment (which as a mum I love - what mother doesn't love being the centre of a wee one's world?)  He makes me so happy and sad at the same time - we have this little blonde whirlwind of a creature in our lives and one day he will also grow up....

And Dave is doing good.  He is also working in the community - working hard as usual.  He's really found his feet and continues to be my bestest buddy through everything.  He's really helped me survive these last few months at work and at home and everything in between.

I hope so.  I have certainly missed blogging.  I should definitely do it more often.