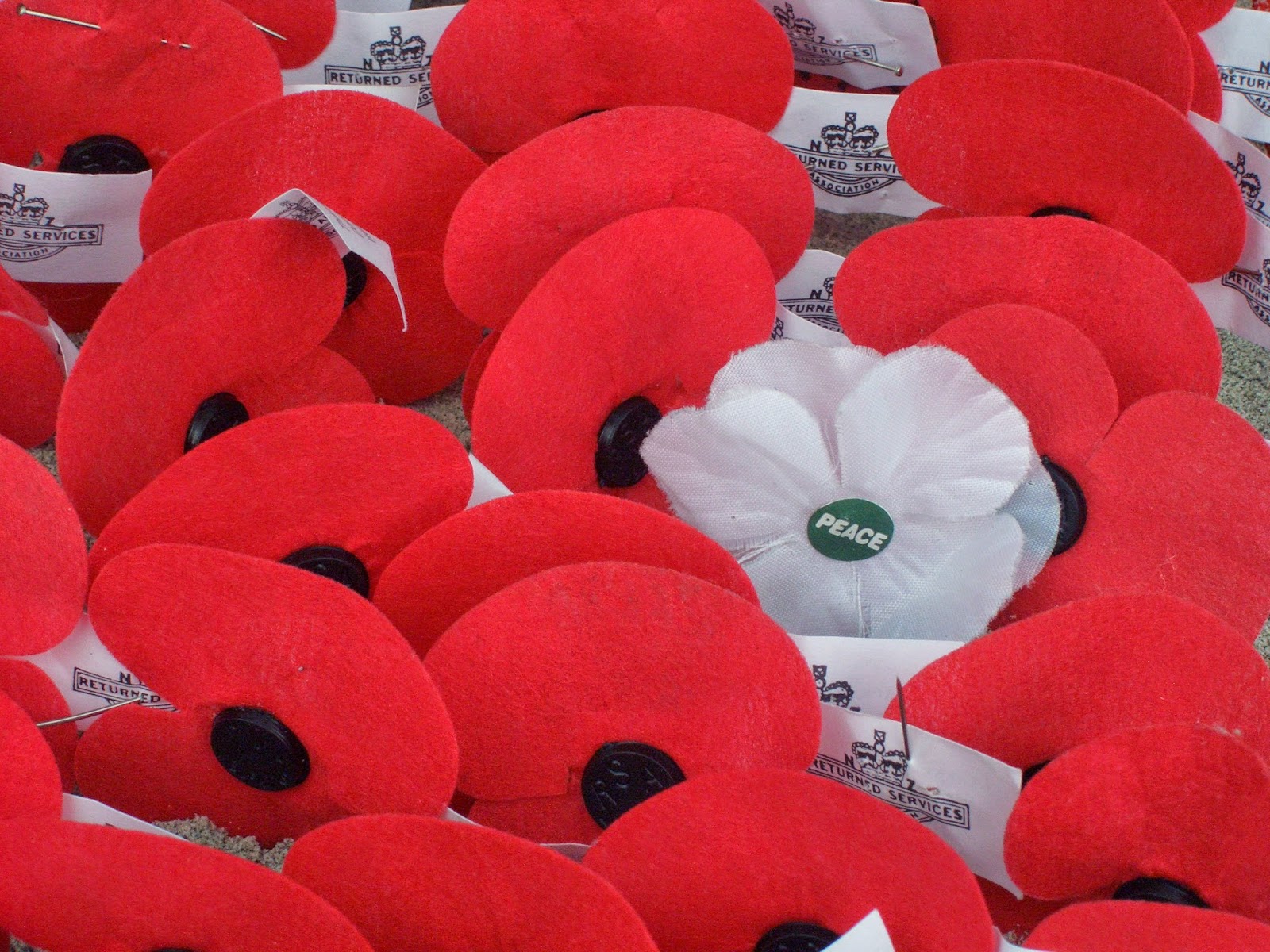 Every year I wear a poppy.  I make a point of buying a new one most times I see a box. I feel like I owe it to past generations to wear one; they sacrificed a lot for our freedom.

As with most things, it was a habit passed on to me from childhood.  A big deal was made in our house about making sure that we wore a poppy.  That we observed the silence on Remembrance Sunday, and it was with solemnity and silence that we thought about the strong family ties that linked us with some of the greatest tragedies of human time.

When I was a wee girl, my Grandad spent ages teaching me how to march like a soldier.  In the long summer days in the garden, after he'd spent the afternoon cutting the huge hedges or cutting the grass to perfection, then he'd sit in a white fold down chair beside the summer house on the yellow and pink patio, smoke a horrible-smelling cigarette and have a cup of tea, and teach my restless, childish mind about things from his own past.

It always baffled and frustrated me as a teenager, and even as a young adult that we never knew more about what my Grandad did in the war.  He bore the scars so obviously physically (he had a glass eye and had been through major plastic surgery on his face and body) and later on, sadly, mentally, yet we never really heard what happened.

We agonised as a family over his own personal torture; what had he done?  What had he seen?

It was just never spoken about, out of respect more than anything.  And that was alright.

It's only now, now that I am that bit older and wiser, and now that I have children of my own, that I look back to my own childhood and the little detailed nuances of warm summer afternoons spent with my Grandad that I realise that he told me more than I understood.

As I stood in my shorts, face muddied after digging holes for plants, t-shirt stained green with grass and dirt, a smile on my face, waiting to be 'entertained', I was just a wee lassie spending time with her Grandad.

Clasping my bamboo cane 'gun' to my chest, he'd give me orders, showing me how to properly carry a gun while marching, how to do a proper 'about turn' and how fast the pace should be.

There's something quite bitter-sweet about that image; an old war veteran, showing his grand-daughter moves from a war which almost claimed his life.  And if his life had been claimed, I wouldn't be here today either.

He'd teach me how to make signals and signs with stones and twigs; secret signals to those who knew the code.  We'd spend hours making them for each other on the garden path, and without even thinking, I turned it into a game with my friends, which we played over and over again.

He taught me how to camouflage my face with fresh-pulled grass, how to conceal myself with cut-down branches when we lopped the tree branched together and how to wash my hands with leaves.  He showed me which berries we could eat and how to use dock leaves after a nettle sting, and how to whistle with blades of grass.

He taught me how to use old rope and carpet and whatever I could get my hands on to build a hide-out at the side of the garage.  He showed me how to stay silent when playing hide and seek with my sister, and how to avoid being caught out by shadows.

My Grandad never told me stories of his wartime buddies, nor did he boast about anything he had accomplished.  His silent victory was in his survival, and the rebuilding of his life and getting to share it with his children, and his children's children.

Every year however, the same silent ritual.  The same respectful moments; dropping pennies into every collection tin we passed on the street or in the supermarkets, pinning our red poppies to jumpers, jackets, scarves, t-shirts.  Falling silent on the eleventh hour of the eleventh day of the eleventh month with more solemnity than our young years should have been able to muster. And afterwards, sticking our poppies in drawers with great reverence, heads bowed, ready for next year.

War was never really spoken about in our house, but it was still a relevant thing.

Of course, we learned about it at school, we talked about it with friends and we looked at pictures in books from the library.  We learned about injustice and hard times and what those we knew and loved had had to do to survive.  We learned about rations and the suffering of those at home and the many, many people who never returned from trying to fight evil and make the world a better place.

It was so black and white to us; there was never any doubt that by wearing a poppy and dutifully remembering those behind us who sacrificed so much, that we were doing so out of respect and love.

When my Grandad died, the ritual carried on, except with even more reverence.

Now I truly had to remember my departed and dearly beloved as he was in life, and as a man who bore so much pain for his whole life in order to ensure our freedom today.  Now when I fell silent, I remembered him and him alone, and I felt even more sure that yes, he had returned from a war so vicious, but it had also claimed a huge part of him that had never come home.

He's been dead for ten years now, and I miss him every day.  I have amazing memories of him and the time we spent together, and I am so very grateful for that.  In that time, I have grown.  I've come out of the awkward teenage years, I've started a family and become involved and interested in politics.  I have read my way around the war - researched where he was posted, read about the battles which he may or may not have fought in and tried to make sense of the part of his life which he never divulged.  I've looked into history books, read about the holocaust, the home front and the man who treated him in hospital, where my Grandad was one of the first to receive pioneering plastic surgery.

I've learned and now understand so much.

And as I have grown, I have made a point of getting my red poppy, every single year.

Times have changed and now a war like the one my Grandad and his friends faced, are thankfully far past most people's lifetimes.

Now they relive this through their parents and grand-parents, and with this kind of distance comes a special kind of forgetting which is neither our fault nor our fancy.

Many of us are desperate to change the world.  Life and politics move so quickly nowadays, with the advent of media and technology. We can often hear of news on the other side of the world via our Twitter accounts before it hits the six o' clock news.

With technology, war now seems further away than ever.  We have been at war as a country for a huge amount of time now - we have had troops in places like Iraq and Afghanistan for years, fighting for things we have been told by governments we need to protect.

Oil.
Investments.
Ourselves from 'terrorists'.

We send troops to foreign countries to get maimed, killed and injured.  We bring them home and make a half-assed job of 'rehabilitating' them.  We press buttons to kill faceless people we don't know in the name of fighting terrorism and protecting the world.

Just recently, we, Britain, started yet another 'campaign' in Iraq.  More war without consultation.

I wonder what my Grandad would make of it.

I used to buy my poppy every year.  Every year I'd make a massive point of pinning it to my chest.  I did to honour what my Grandad and his generation had been through. To remember the sacrifice that they had all made; the lives lost, the children gone, never to return, the rupture of a whole lifetime for the whole world.  A lesson hopefully never to be repeated.

I did it out of respect for the man I loved, for his experience and his health and his life.  To show thankfulness for his life.

For the first time I am considering not just donning my usual red poppy, but instead wearing a white one alongside it.

This year, more than ever I am aware of what is going on in the world, and I just don't know if I would feel right this year wearing just a red poppy on my lapel.

A white poppy signifies hope for peace. A hope that no more blood be spilled.

But this year I think I have realised that war never ends.  The justification for the current wars are just not enough. Men, women and children around the world are suffering every day. We still need to support those who fight, but we need to show that it's not enough.

This year, I need hope. I will be seeking out one of each.  Red for remembrance and to support those who have suffered through war.  And white for hope.