Zizzi Loving! A Great Family Meal In The Heart Of St. Andrews


I have been a very lucky lady lately.  Not only have I been invited to review the very yummy fare at Pizza Express,and have spent a whole day sampling goodies at The Edinburgh Foodies Festival, but I was also invited along to Zizzi's in St.Andrews to try out their amazing family-friendly menu.

I am also extremely lucky to be very good friends with the lovely Jac at Tinned Tomatoes and we were extremely fortunate to be invited along all together, our other halves and children included, to try out some of the spectacular food in this Italian delight. 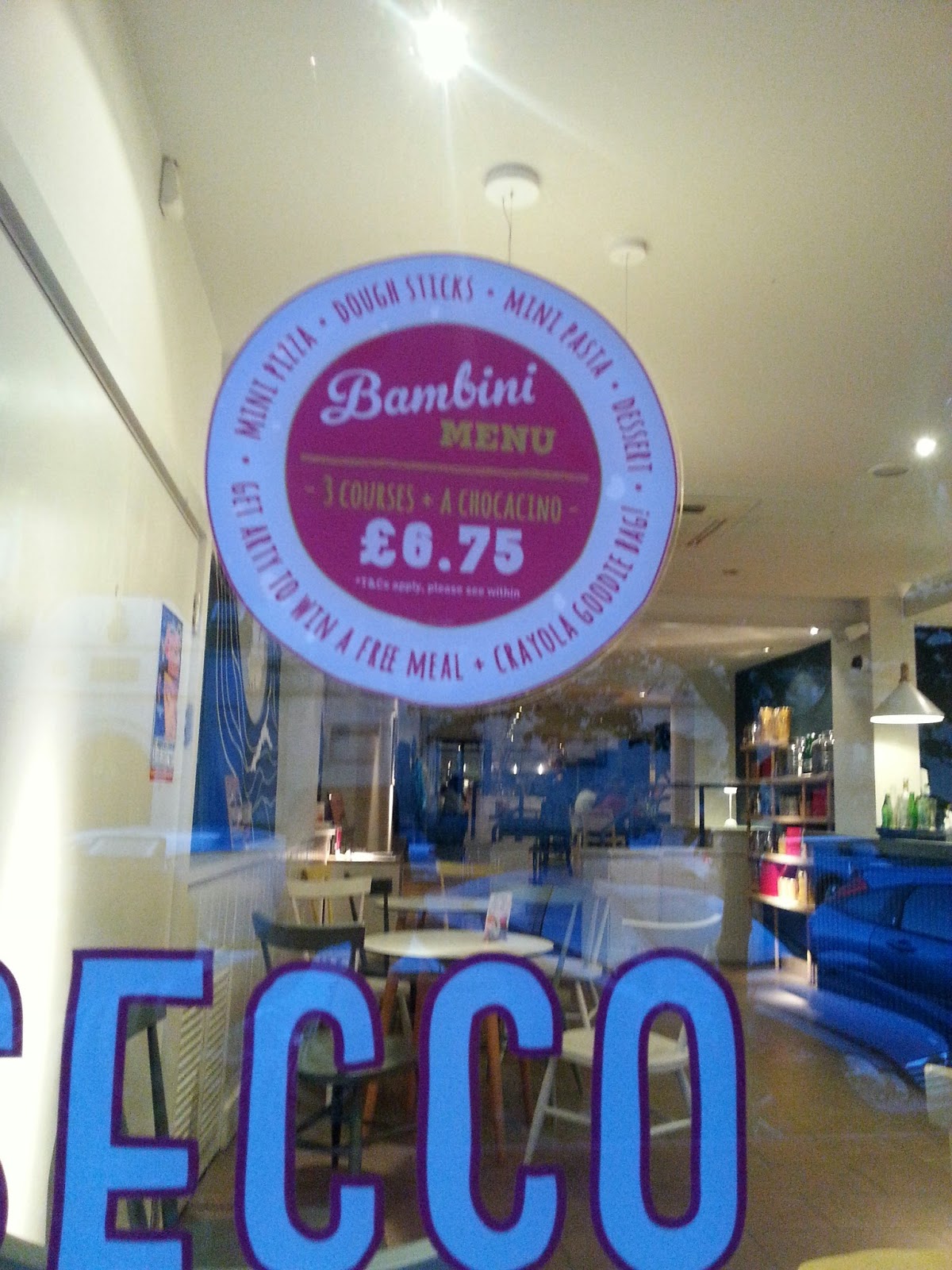 Zizzi's is a deceptively large restaurant in the heart of St Andrew's and offers a spacious, atmospheric space, suitable for the whole family.  The atmosphere is fabulous - very busy and quite noisy, so I didn't feel like I had to keep the kids and their loud voices in check too much, which for me, made a more relaxing experience. 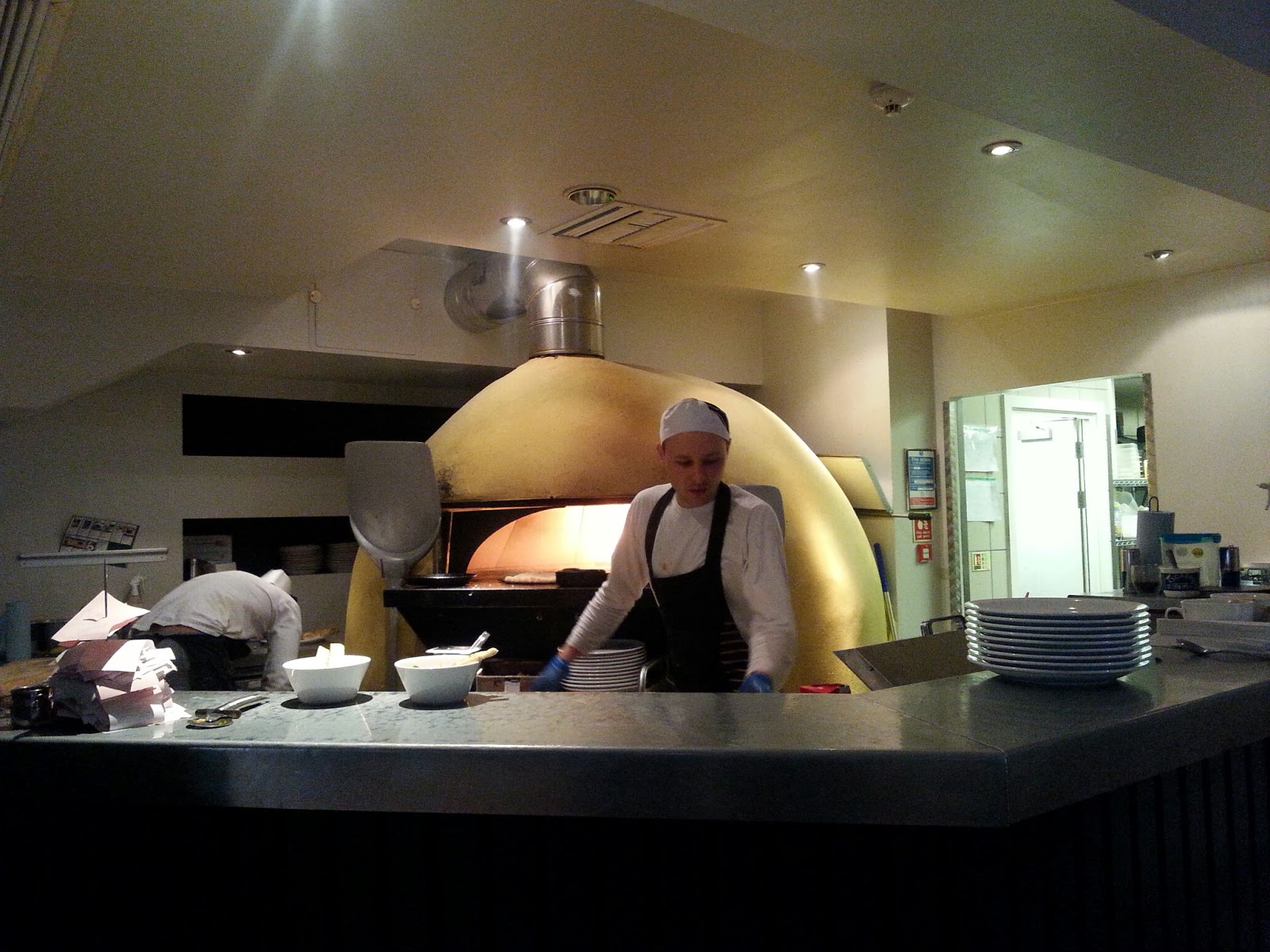 The huge mallow shaped pizza oven is situated at the rear of the space, with an open kitchen, where you can watch the extremely busy and quick chefs at work.  It was all very impressive. 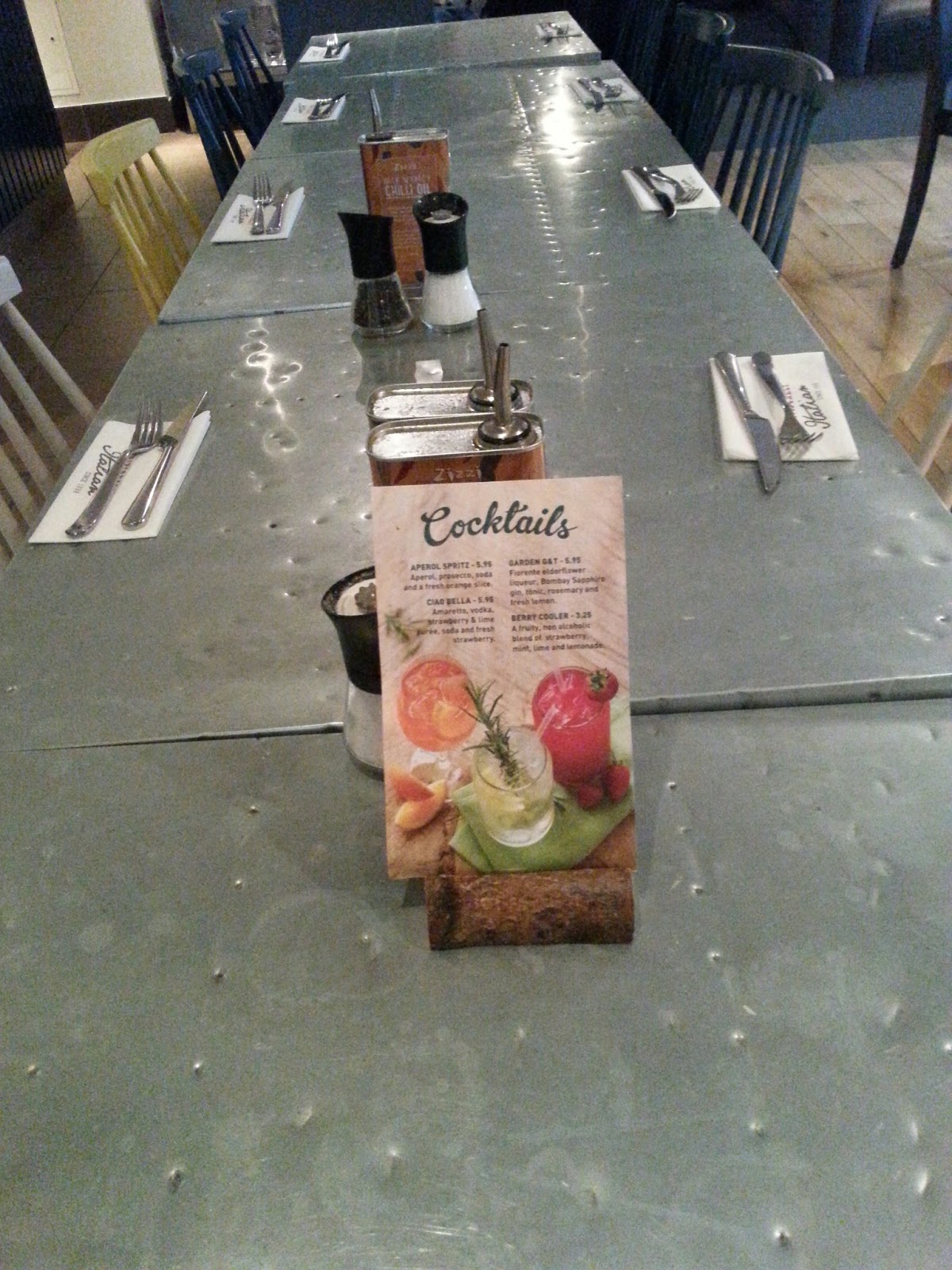 The furnishings were of a very high quality; nice sturdy wooden tables, large enough to carry the weight of the food and to deal with squirming, ants-in-your-pants children (Thomas never sits still!), so I didn't have to worry about them tipping the table and soaking us all with juice. Always a bonus!

Zizzi's has a very nice new children's menu - The Bambini Menu - and for £6.75 your little bambini will be a very well-fed bambini indeed! 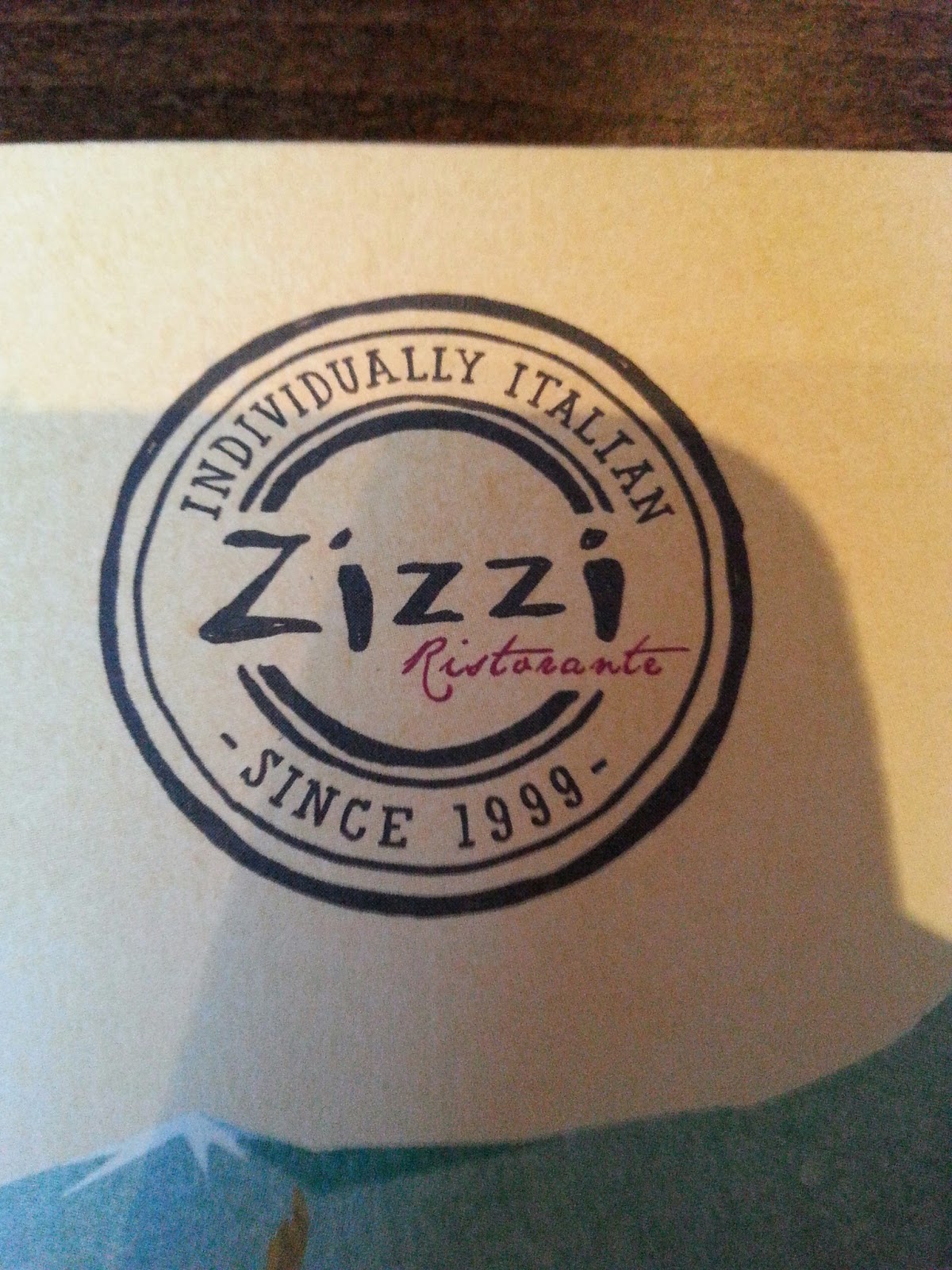 The menu is a set as 3 courses, with a chocacino to finish (a mini glass of chocolate milkshake - very cute!) and it's vegetarian friendly to boot, which is great for our kids.

There's no need to worry that the fare is going to be too fancy for wee palates either - the food is all very fresh and healthy, while catering to the somewhat plainer tastes of children. AND they provide some pretty fancy Crayola crayons while you wait! 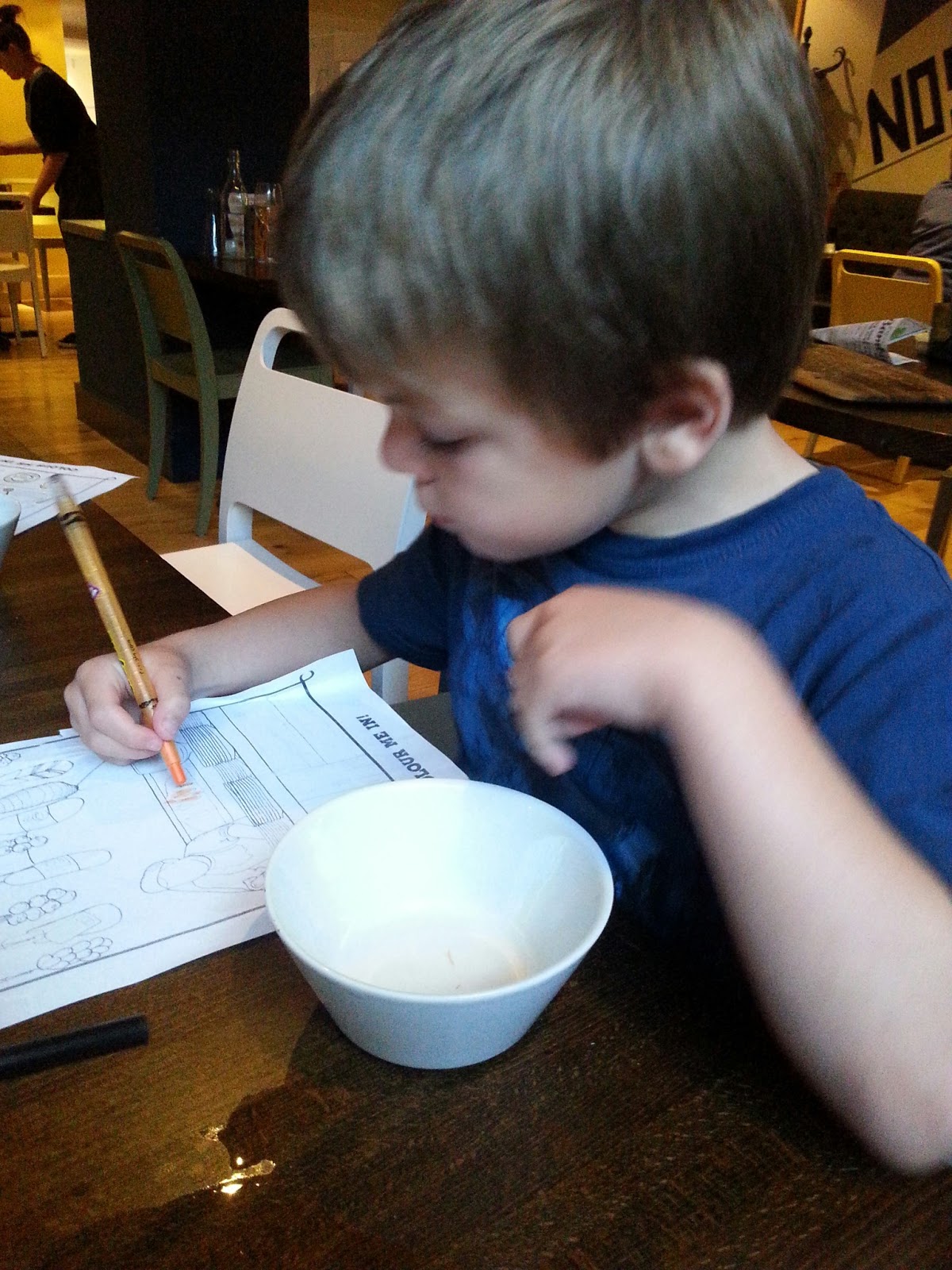 To start, they are served with carrot, cucumber and dough sticks, which Tom absolutely loved.  It's not too filling for him and also, he loved feeling grown-up with his own wee dish, rather than picking from my own starter, as he usually does if we go out. 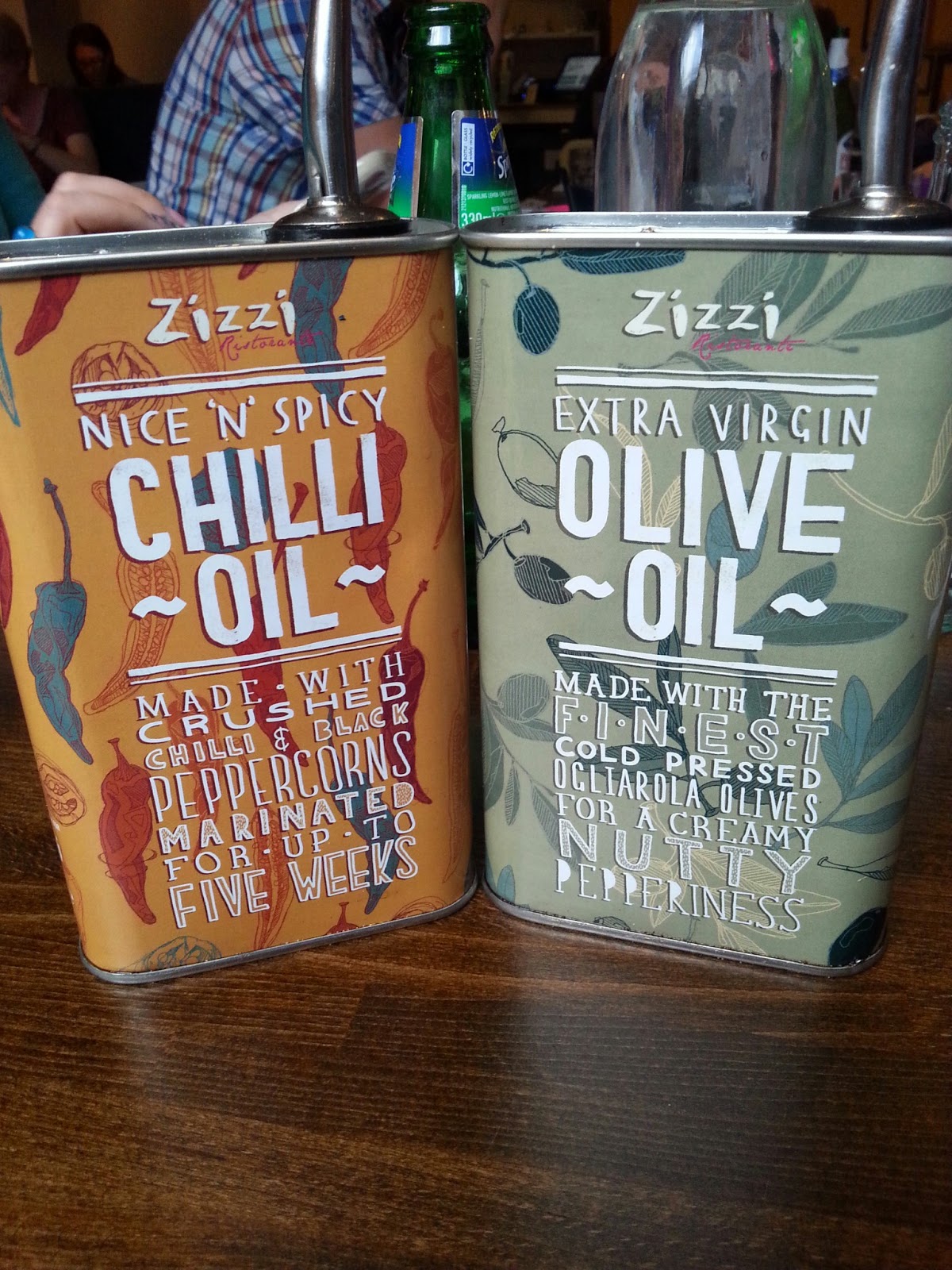 Ethan wasn't so keen on the carrot or the cucumber.  Trying to get that boy to eat any fruit or veg is a nightmare at the best of times, but he was happy with the dough sticks, and I ate the veg for him.  I thought he might at least have a go, as Cooper and Thomas were having theirs with gusto, but no!  He's pretty set in his ways. 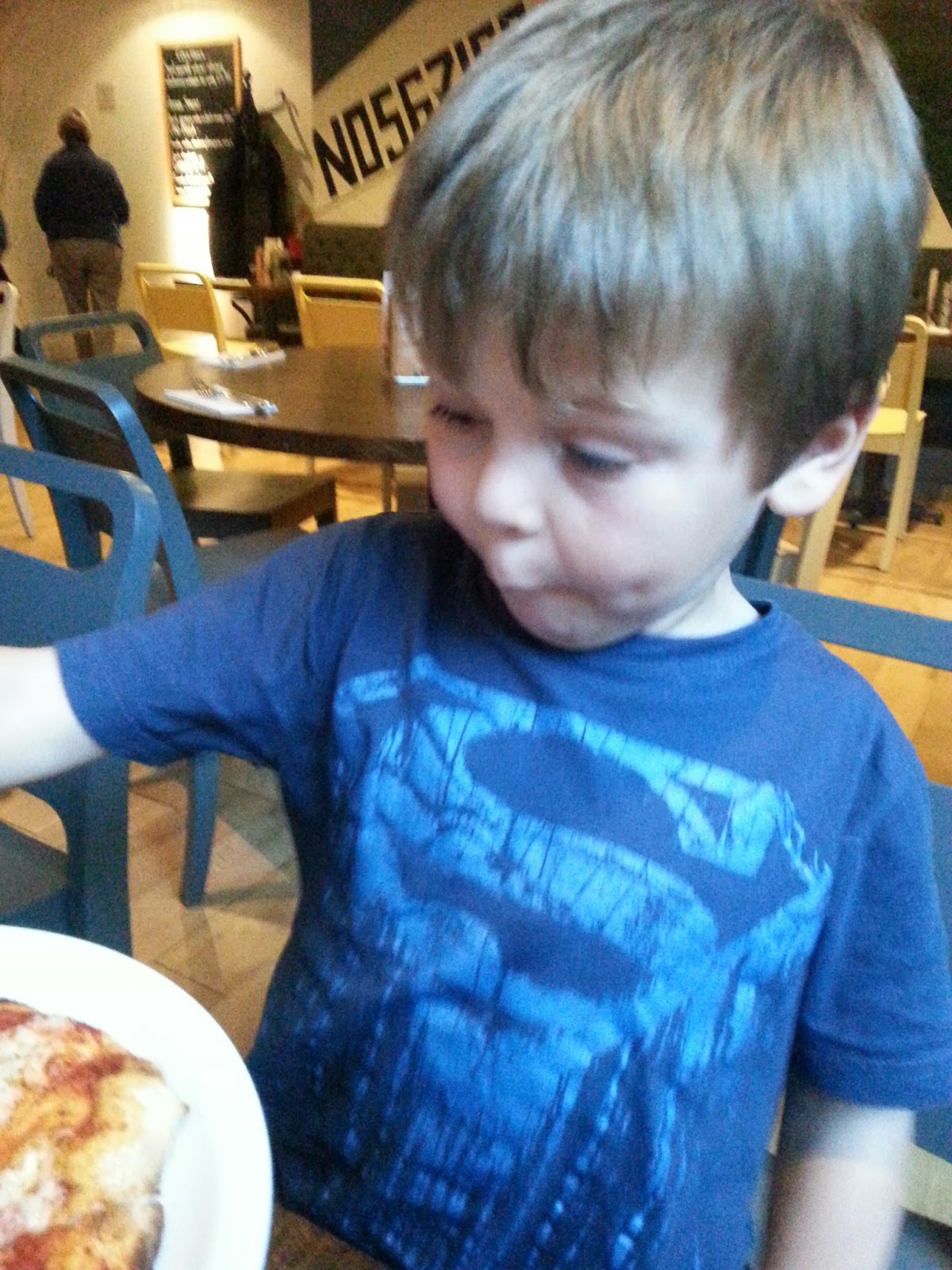 For the kids, the main was a bit of a no-brainer; they were given the choice between Mini Pasta or Mini Pizza , but with all the pretty damn fine pizza smells wafting around and after sitting watching all of these gorgeous pizzas making their way from the kitchen, they opted for the Mini Marguerita. 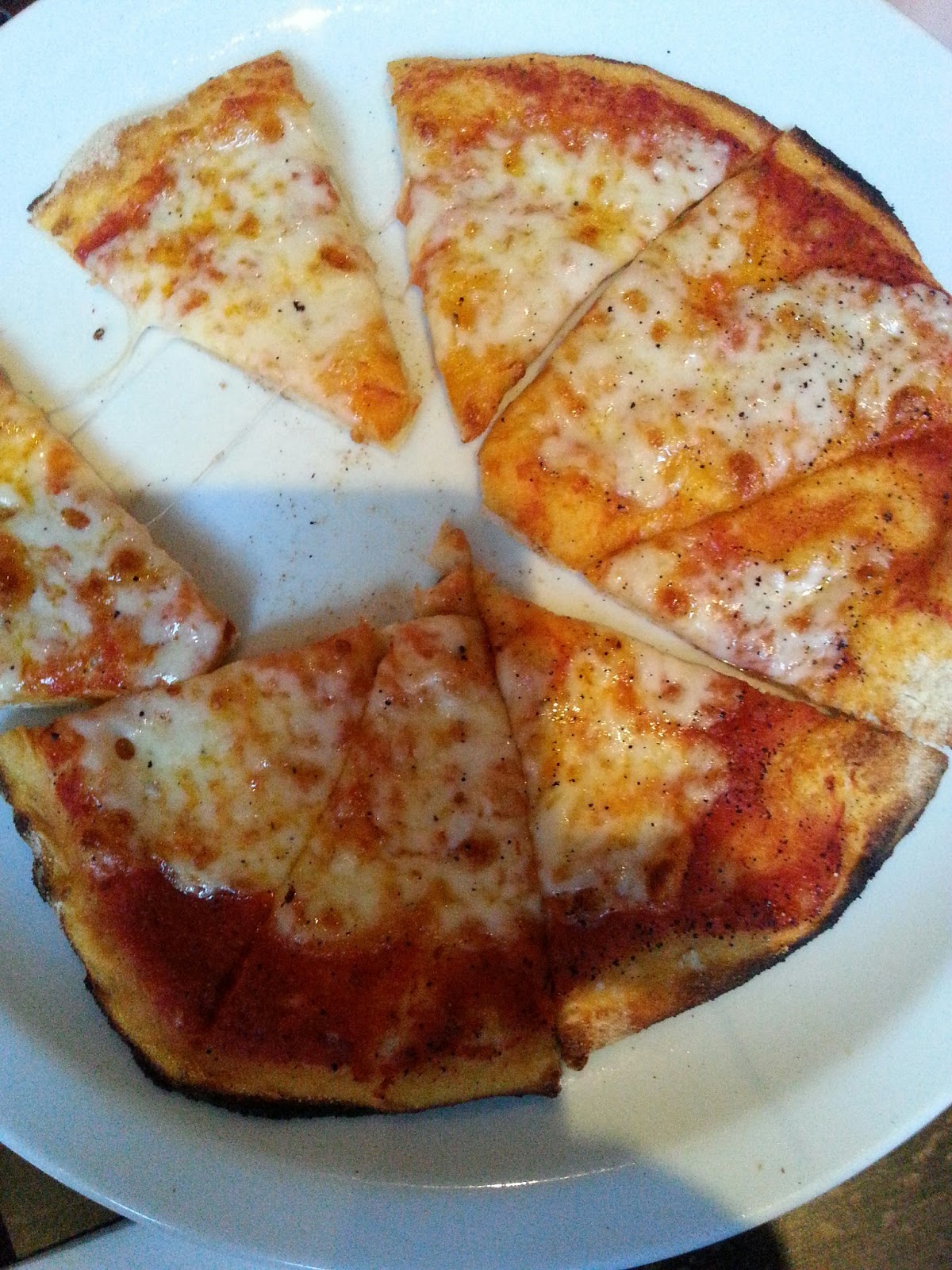 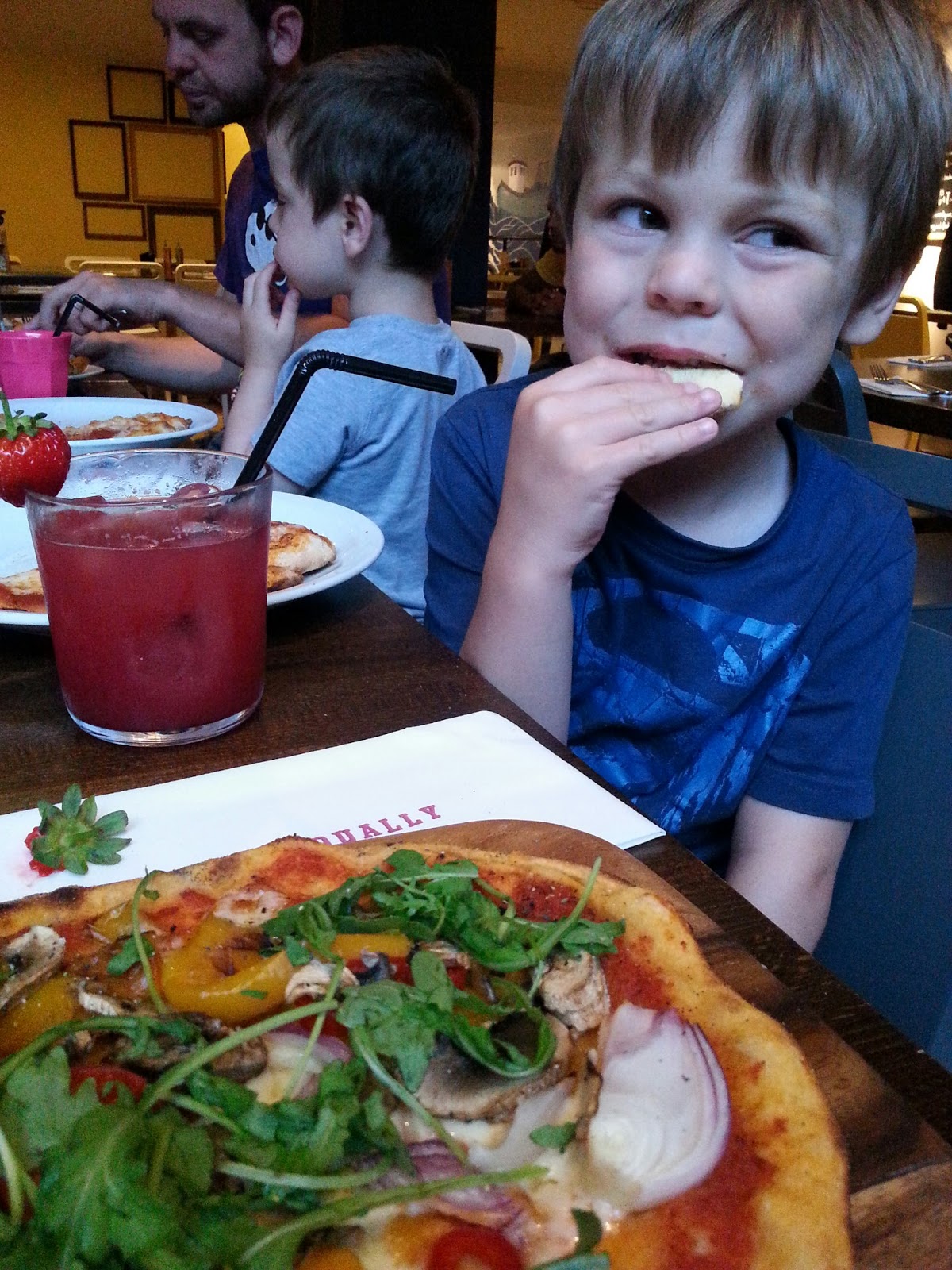 There is a fab wee option with the mini pizza where you can order toppings in little dishes so that you can 'make your own', which is a lovely touch for the wee ones - making them feel like they are little pizza chefs, which is really cute.  I thought that was a really nice touch.

Unfortunately, my two boys have a fussy taste like their mother, (who? me?) so they simply wanted the plain Marguerita, which meant we didn't get to see this in action.  The boys really loved their pizza though, and I have to say, considering the size of them, and the fact that they had already had a starter, I was fairly surprised to see that they both ate the whole thing!

If your kids like their veg, there's an option here to add some Broccoli or Beans, but it does cost 50p extra.

After we'd visited the toilets and us adults had finished our enormous meals, we got ready for dessert.

Tom opted for the Ice Cream (2 scoops of flavoured ice cream, from a wide choice of flavours), while Ethan went for the fabulous looking Zizzi Bambini Cones, which was served as two scoops of ice cream, two mini cones and popping candy.

Ethan negated to make his own cones as suggested (ever his own man), but instead decided to do it his way, taking a bit off the end of each cone and slurping the ice cream while scooping popping candy into his mouth and laughing.

He really enjoyed this dessert!  I think Tom was a bit jealous - it did look really cool.  Plus Ethan was having a great time, shaking his head after eating the popping candy.  I asked him what he was doing and he said 'It's like maracas in my mouth, Mummy!', which did make us all laugh.  He is too cute sometimes.

The kids all had a great time, but us adults did too! 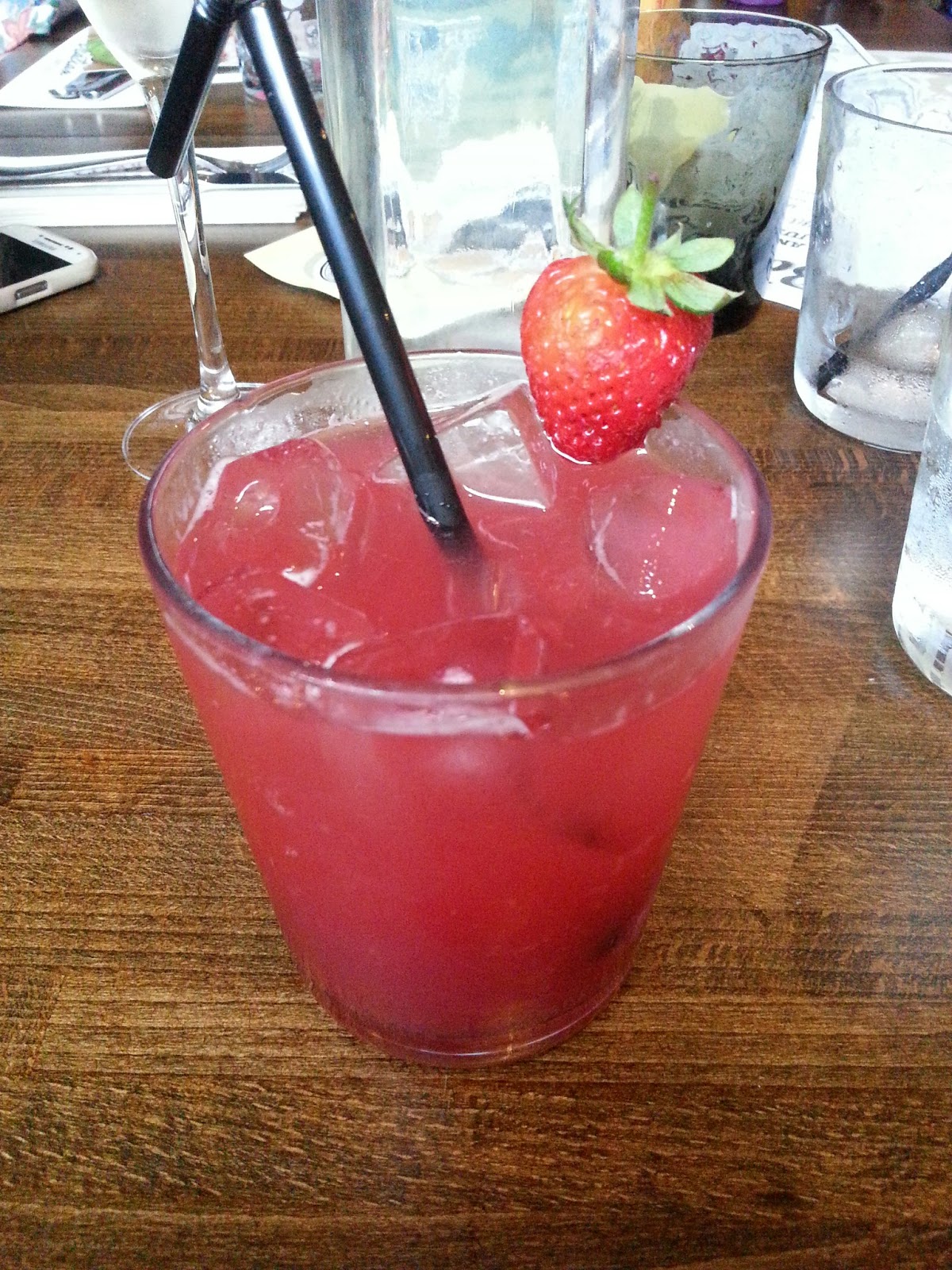 While everyone got stuck into some rather tasty Peroni Italian lager, Prosecco by the glass, cocktails and juice which were all readily on offer, I happily ordered myself a virgin cocktail, which came decorated with a fresh strawberry and was a lovely wee treat for the designated driver! 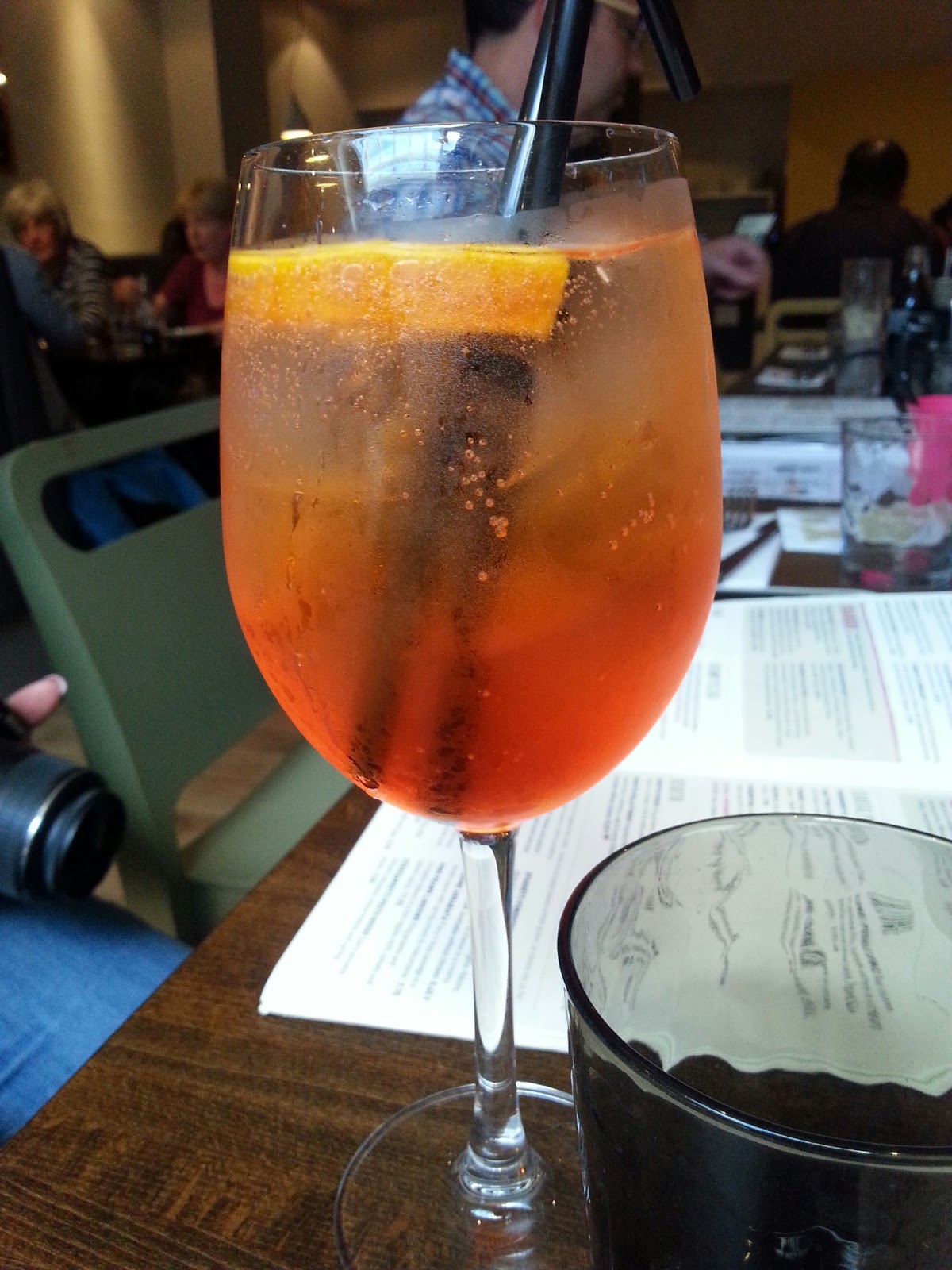 The food was amazing too.  Hot on the heels of the kids' starters, came our very own. 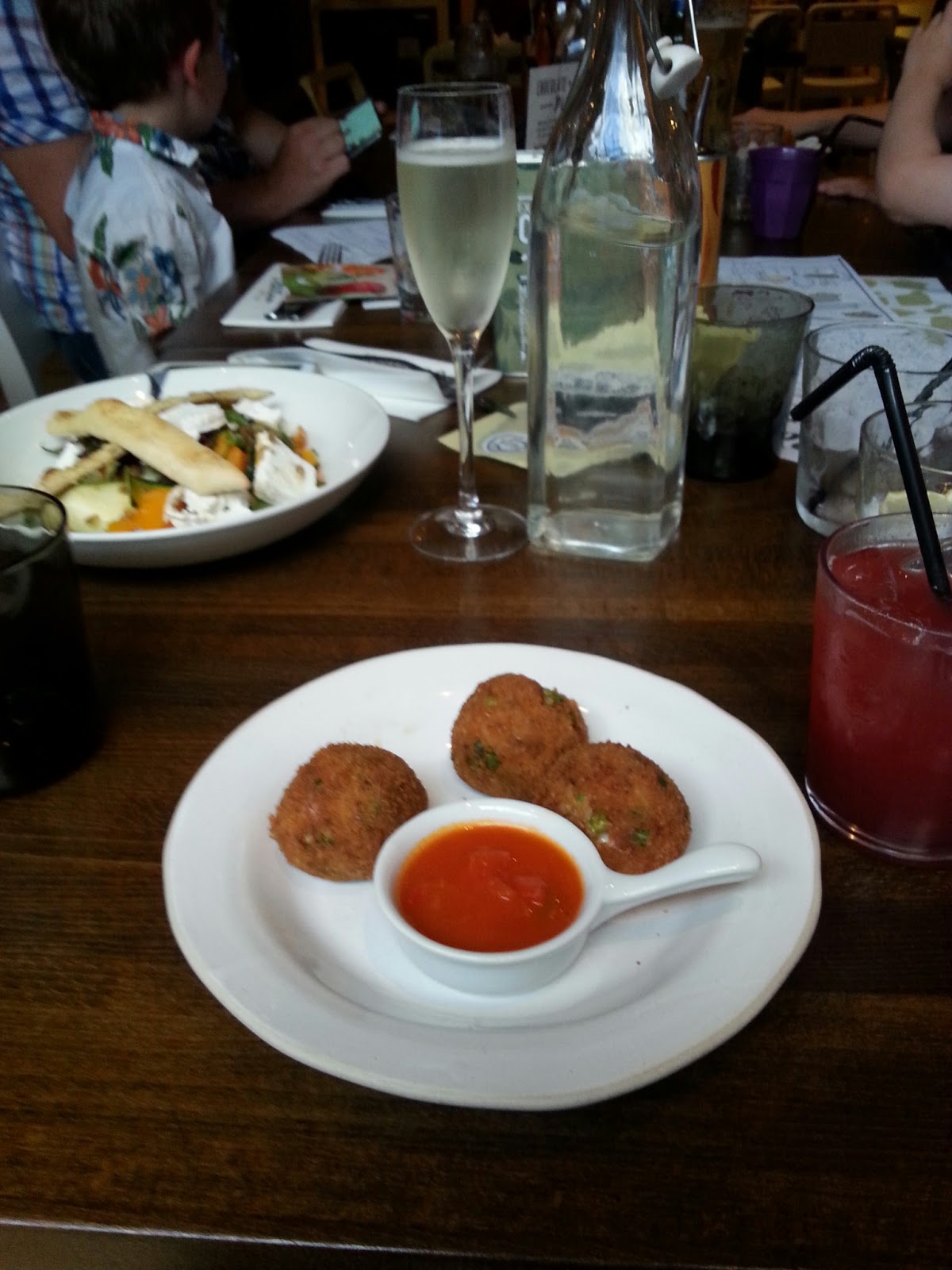 Dave and I ordered the Arancini breaded risotto balls, which were absolutely delicious, consisting of risotto, mozzarella and peas, fried in golden breadcrumbs.  They came with a wee tomato peperonata dip, and to be honest, I could have eaten these all night.  I reckon I'll try to recreate these at home! 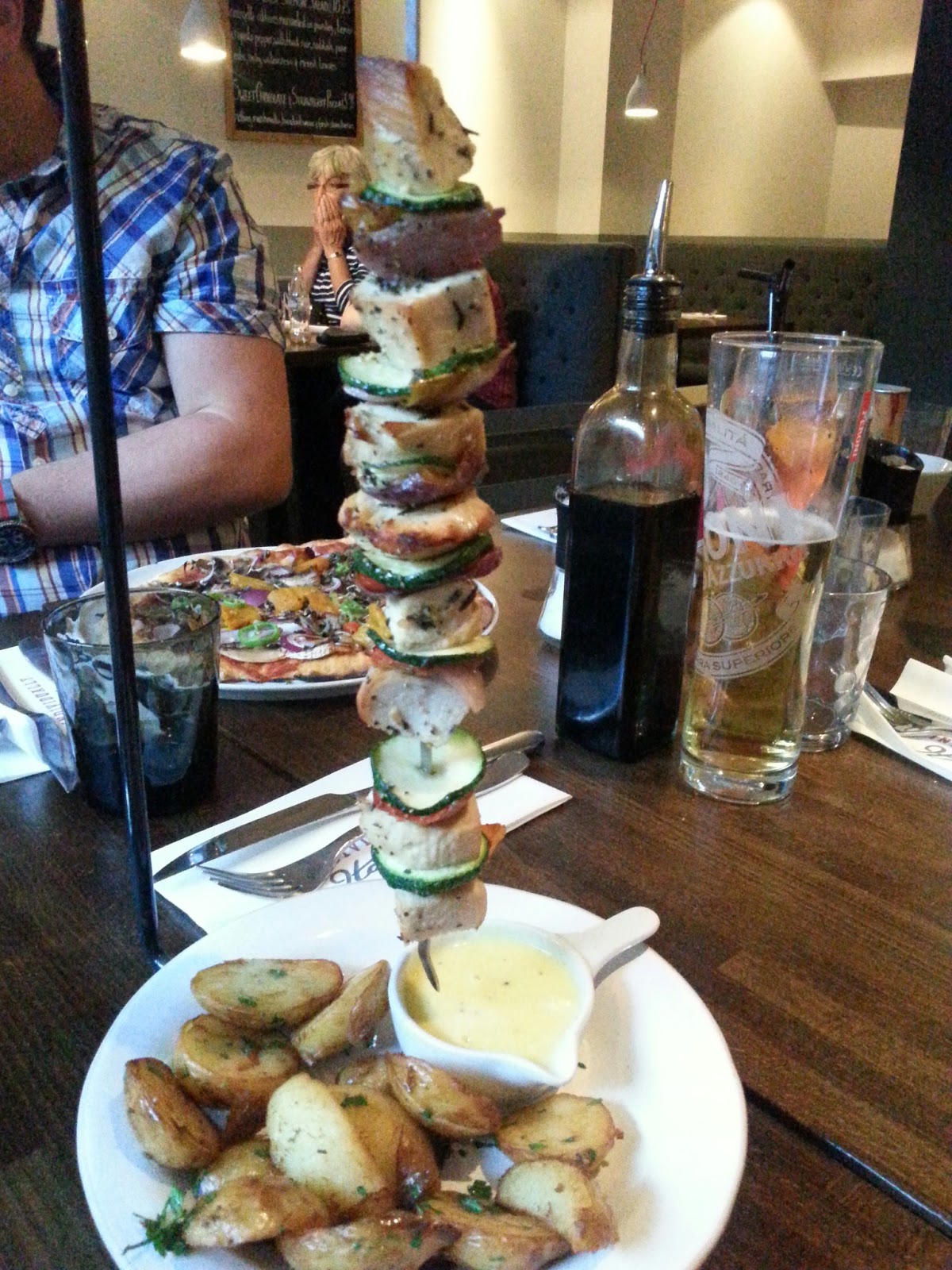 Next up, Dave ordered Zizzi Spiedini Pollo, which was presented on a stand, making it extra impressive. This came with Tuscan potatoes and a white wine and lemon sauce.  It looked awesome - even if I don't eat meat.  Dave certainly enjoyed it! 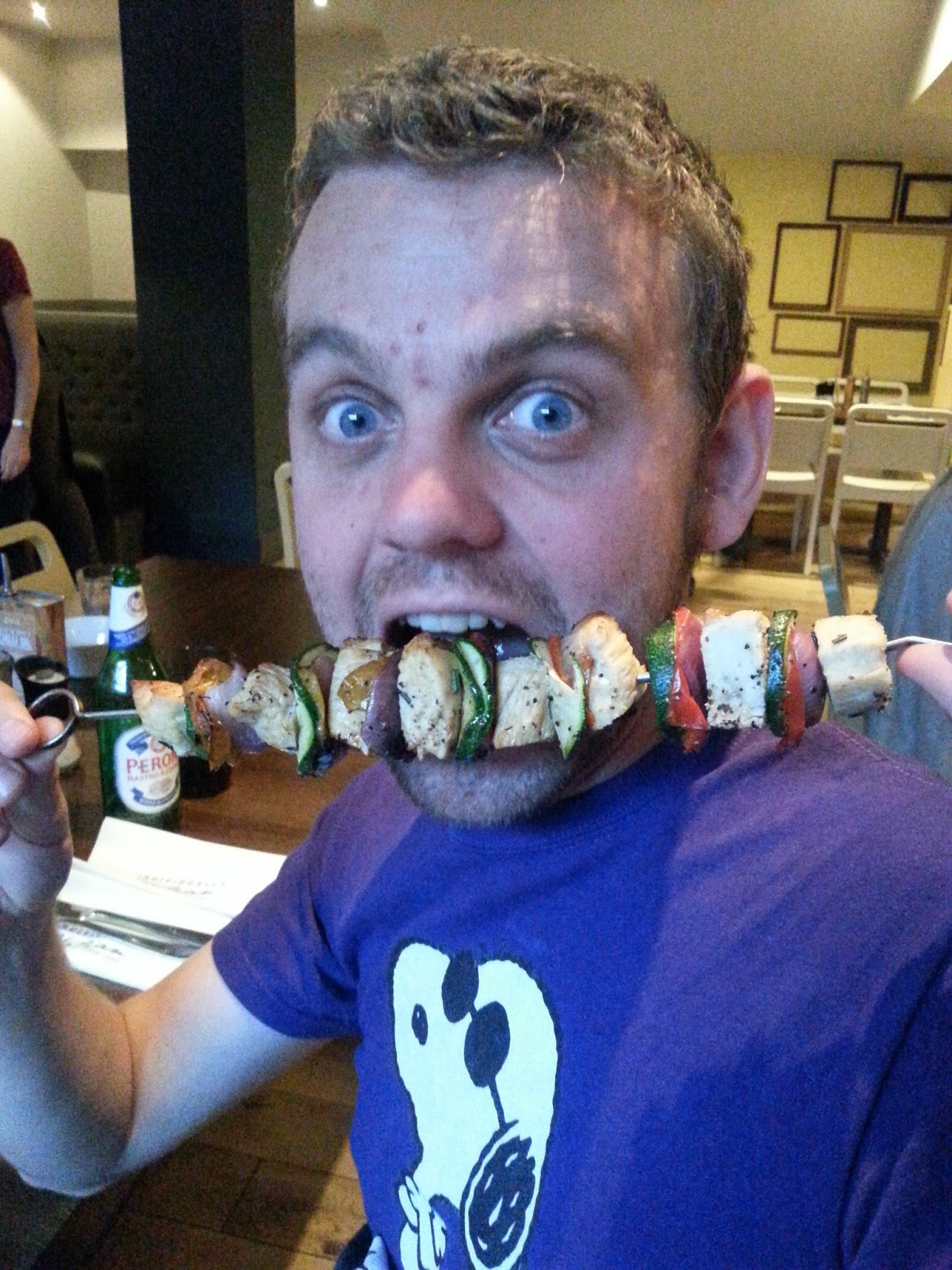 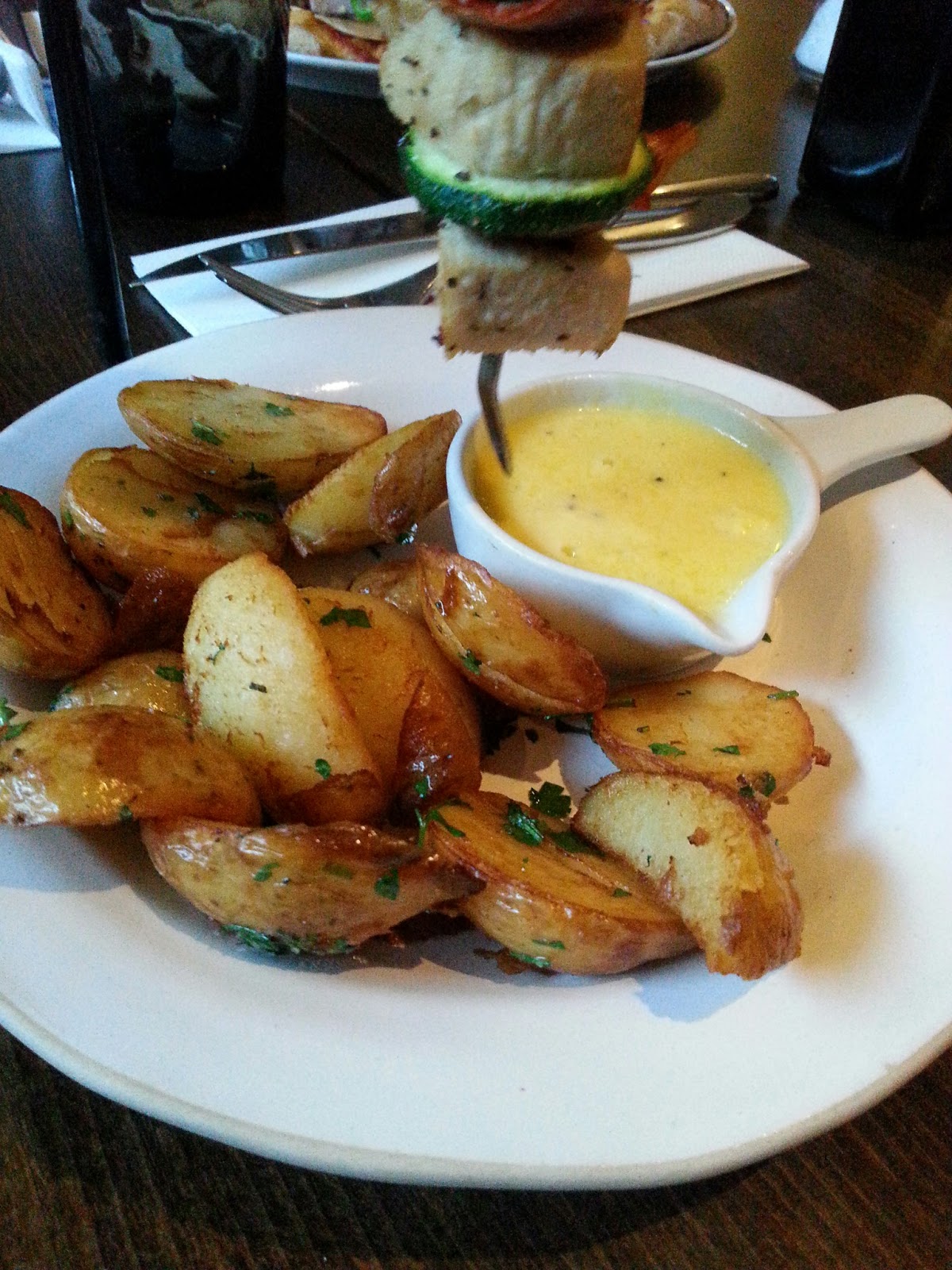 Meanwhile, what did the fussy vegetarian order?

Well, I even surprised myself when I ended up with this particular main course. 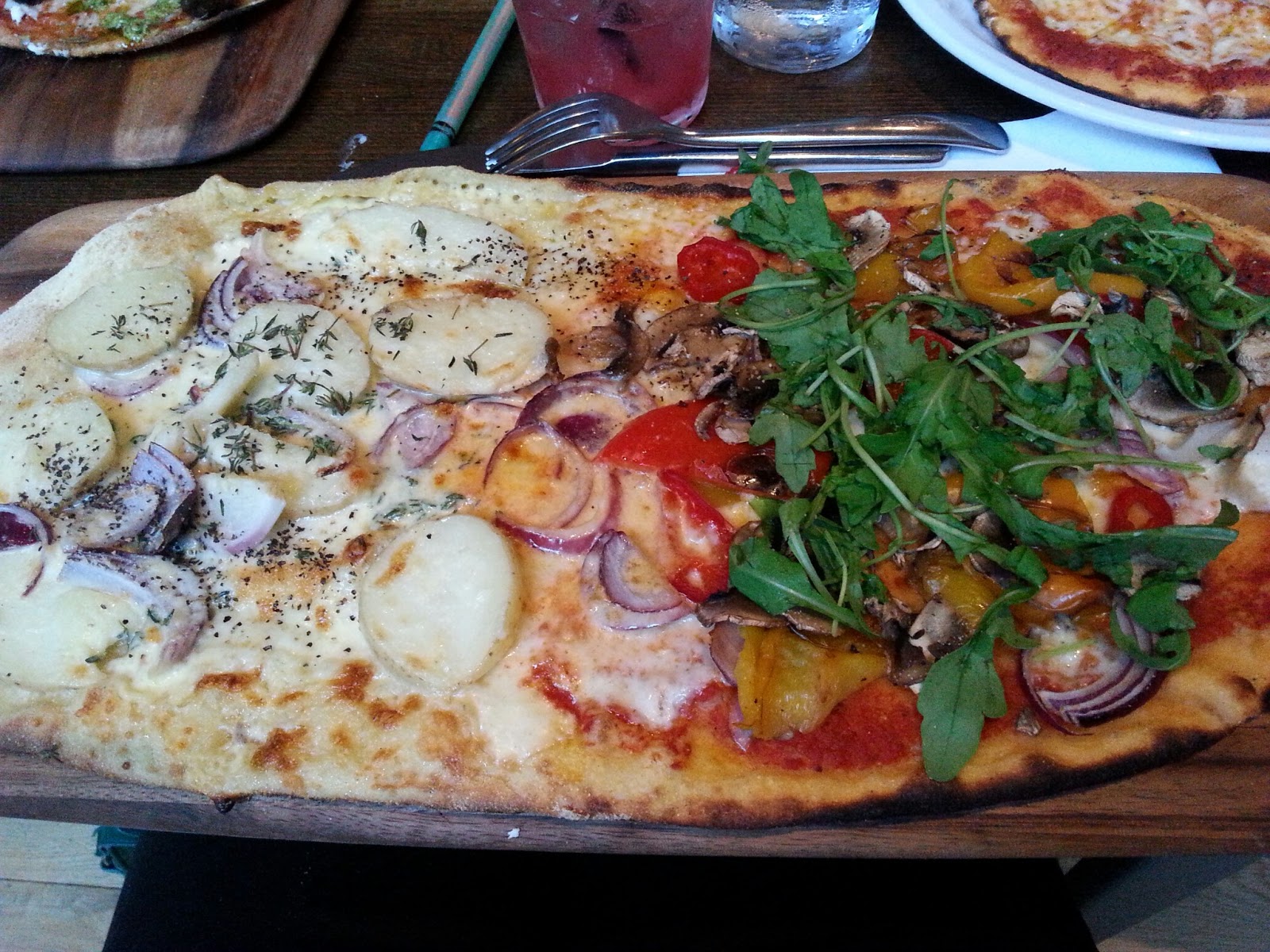 To the left of the pizza is mozzarella, new potato, riserva cheese, red onion and thyme.  To the right, a contrasting flavour amalgamation of half-roasted peppers, roquito chilli, mushrooms and rocket.

On the left, salty, cheesy, savoury goodness.  On the right, sweet, hot and slightly peppery.

And the best bit?  I couldn't finish it all, so they boxed it up for me and I went through the same amazing taste sensation the next day. Perfecto!

Of course, you aren't simply limited to Pizza at Zizzi's.  They also serve up a mean selection of Risottos, some amazing Calzones, some beautiful Linguines and traditional Lasagne.

There is a massive choice - and they do take-away too! 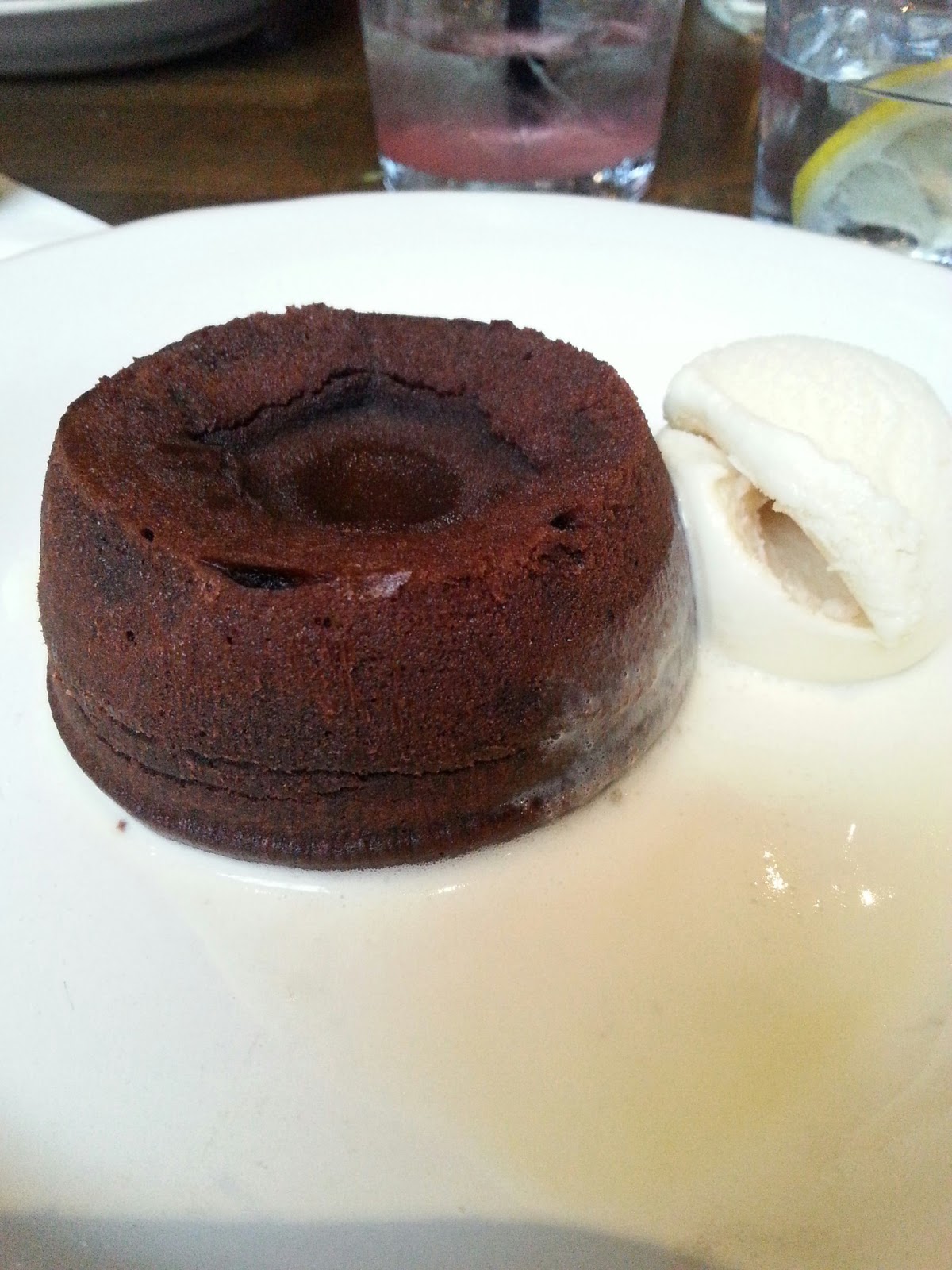 Of course, despite being very full, we had to try dessert and this did not disappoint.  I enjoyed a rather moreish Chocolate Melt pudding, which had a gooey warm middle, and some lovely vanilla ice-cream.

Dave however tried out the new and very delicious sweet pizza.  What a fab idea! 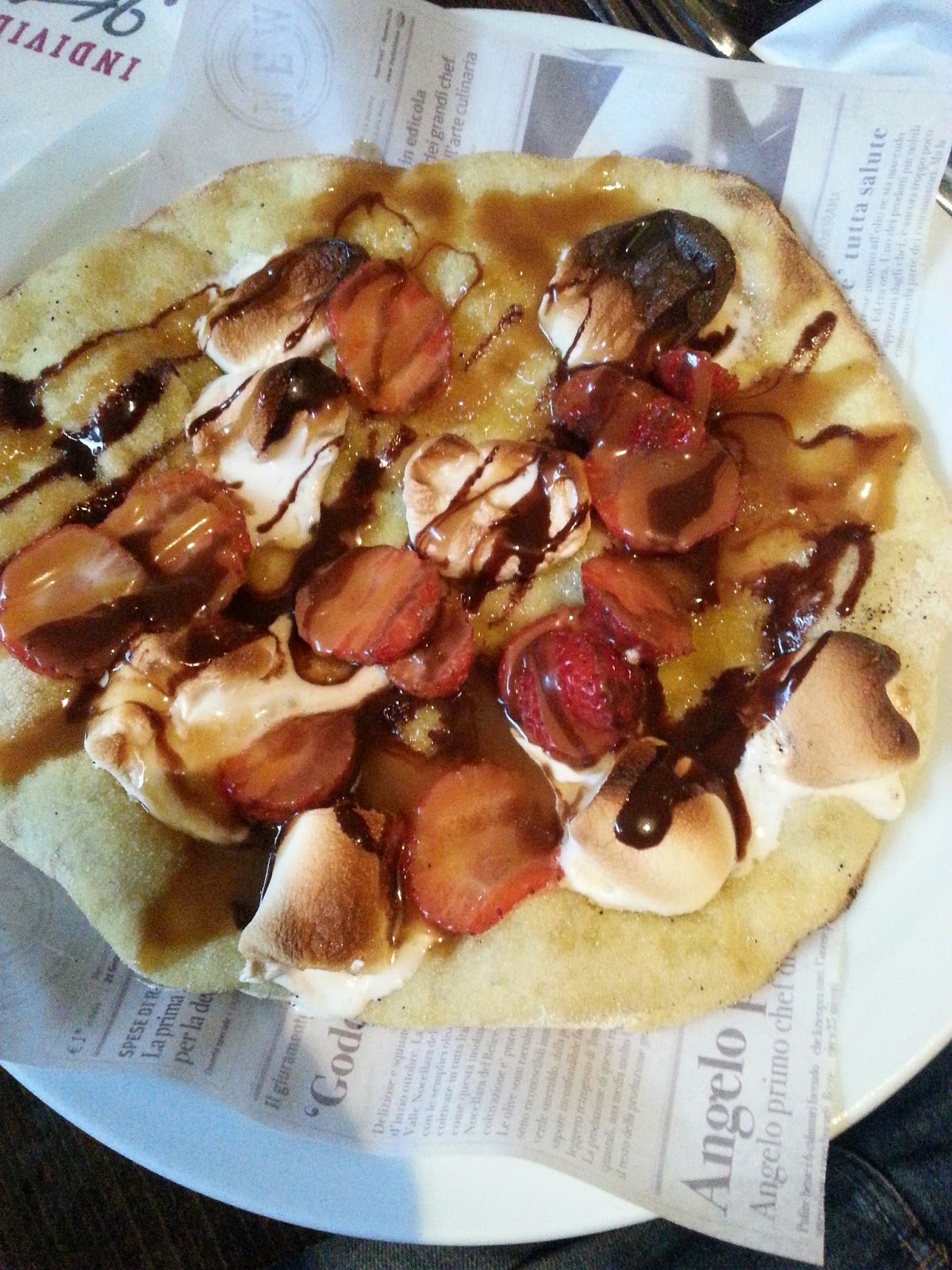 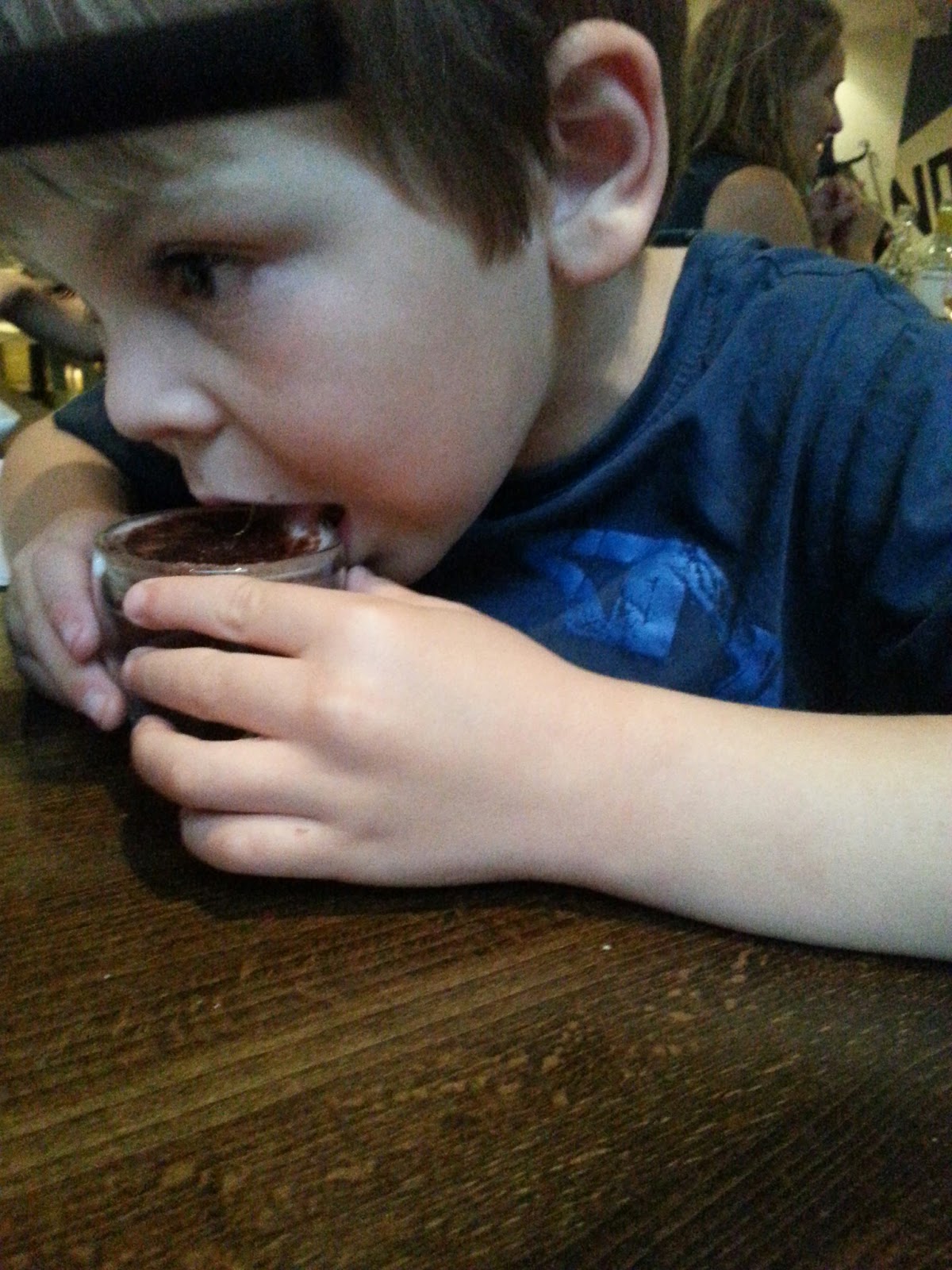 The kids were also served with their chocacinos while we finished up, which was such a nice end to the meal and made them feel very grown up, as well as loading them with even more energy, which they then used up outside, racing up and down the street outside!

After having a wee run around St.Andrews, playing tig and chasing the kids around the street (it's okay, they were pretty much deserted!), laughing and giggling, we all piled into the car for home, just as the sun began to set.  We'd all had a really lovely time, and are sure to return soon!


It's worth it for full, knackered children!


*Disclaimer - I was asked to attend Zizzis to try out their new menu and review the Bambini menu.  I did not pay for my meal, nor was I expected to give a positive review.  All opinions are completely my own.