We had a total blast this summer in my favourite place.

For the second time since Owen was born, we went on a family holiday and back to the wee corner of the world that feels like home - Blackpool. 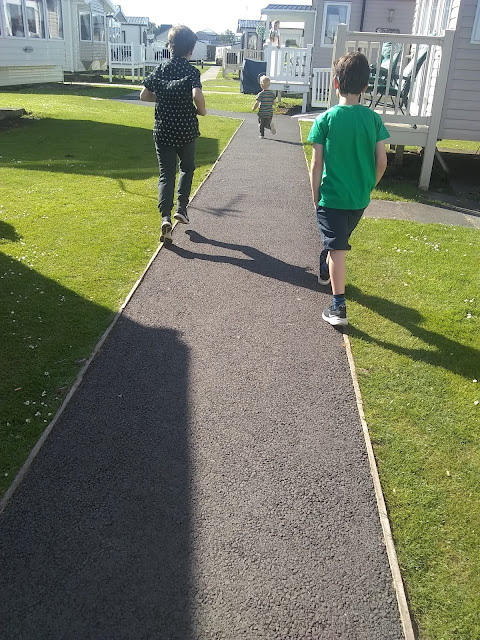 Well, technically, Fleetwood, but hey, we were there for the main attraction.

It took me a full on year to pay for our holiday and save for the spending money - last year we went with barely any money and it was a very tight squeeze!

This year I was determined that we would be able to eat out, to spend money on souvenirs and do some of the things that we wanted to do the year before.

Then I quit my job about 3 weeks before we went due to stress and faced the prospect of no wage when we came home from our holiday - great timing, as per.

For a while, it looked like we might need to call time on the idea of going away, but we had looked forward to it for so long...and paid for it....so off we went.

We stayed in a caravan at Cala Gran holiday park, which is home to an arcade (hours of children pouring my hard-saved money into machines every night), an entertainment venue (where you dream of sitting on your bum with a glass of wine, watching terrible, but funny holiday shows but instead the children just want to pour money into said machines in the adjacent arcade) and a pub (where you dream of sitting on your bum having a cheeky half pint in peace, but horrible children grudgingly half eat some of the most expensive pub food ever in between trying to head out to the adjacent arcade with my hard-saved pennies  which are burning a hole in their pockets, or running excitedly to the just-out-of-sight park where the four year old keeps getting stuck on the climber). 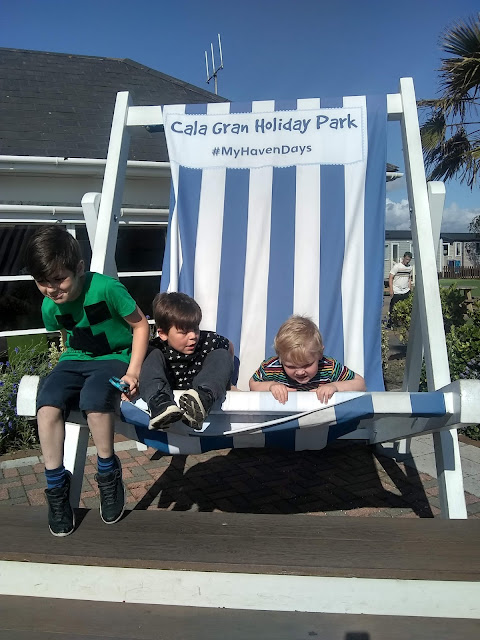 There is also a small swimming pool (adjacent to the pub, so mum can watch dad playing with the cherubs in the pool while having a cup of tea - ha ha, win!) and an outdoor water park thingy (where you can watch your kids run around while shouting 'be careful' and 'don't do that' at random intervals instead of relaxing.

I don't know if I'm just more cynical as I have gotten older or if arcades are actually more geared to ripping all of your cash out of you for very little fun or return.  Well, that and inflation, I suppose.  It just irked me (and all of the other parents I saw standing in the queue for the prize shop at the end of the week to redeem their tickets) when what must have been about £100 equated to three keyrings, a Hulk Hogan bandana and a set of stickers. 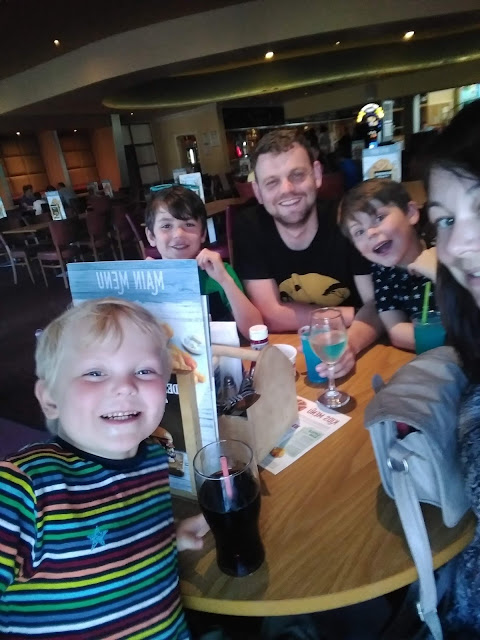 We all had a blast on holiday - but it is knackering.  But noticeably easier than the previous year.  The older they get, the less tightly wound they appear to be at the beginning.

Last year was crazy - just absolutely constant.  With Ethan, we always have to be 'doing' something and he never seems to be happy with what we are doing - just looking ahead to the next 'thing' which is kind of exhausting and relentless.  Especially in a holiday situation!

He was definitely more chilled this year - not massively - but it was certainly a bit more pleasant.

The first evening was spent paying grace to the gods of Arcadia by lining their metal trays with offerings of coins from children's pockets (we won about 400 tickets at the 2p machines).

We spent so much money on our tea that I felt obliged to put in a complaint online ( £54!!) and I nearly felt like taking a swing to Lidl to just buy food to survive the week.  There's something really weird about living on barely nothing week to week for the last 5 years and then suddenly allowing yourself to splurge - you almost just can't do it.   It doesn't feel pleasant!

It was actually quite comforting to take in sights such as market stalls selling some pretty questionable clothing in xxxl sizes, wigs and underwear, all of which the kids enjoyed having a giggle at while we shout-whispered "PUT.THAT.DOWN" with crazy eyes while trying not to laugh.

We lunched at a very reasonably priced cafe which was very busy and had a Monet theme, which gave it an air of 1980's Granny's Glasgow house chic (dusky pink, Monet pics in gold frames with gold lamps) , which again was quite comforting and hearty. 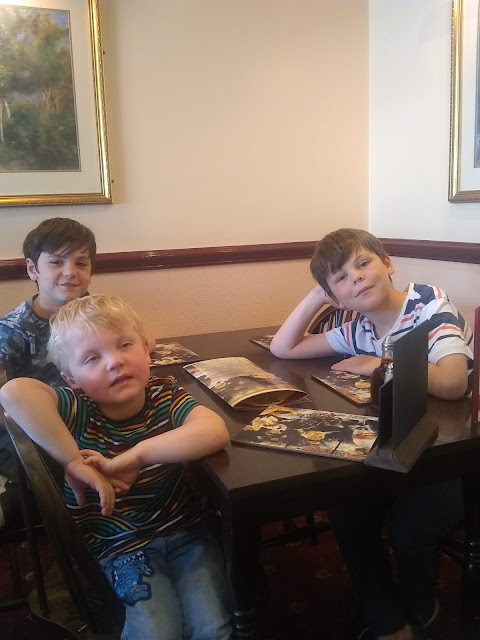 I had a very nice 'barm cake' which Dave had a lengthy argument with me about ordering due to the fact he said he would "just be asking for a cheese roll" and I had words with him about the fact a roll and a barm are two different things, which after a quick Google, he realised they were NOT!

(If you have any interest in this - a barm cake is made with excess foam from beer making! A roll is not!)

It may have been a more heated argument than it needed to be...aherm...

Thankfully we had the comedy break of watching what was a woman armed with a full-on water gun standing in the middle of the road outside, shooting seagulls who were swooping down on those who had chosen to eat at the pavement cafe.  So that was funny.

A quick walk along the water front (very windy) where we talked to dogs (not people though) and the boys (including Dave)  obviously decided that  every bench, concrete fixture and pole was some kind of elaborate parkour trail, so it was more me walking like I was the head of a troupe of crazy, not-very-coordinated, loud, monkeys that I didn't know were following me. 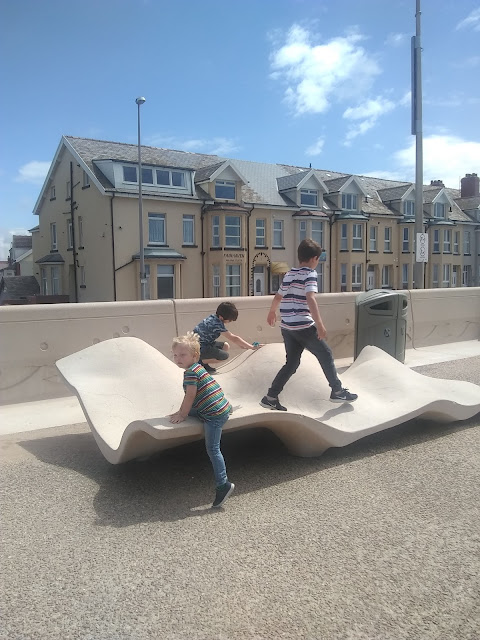 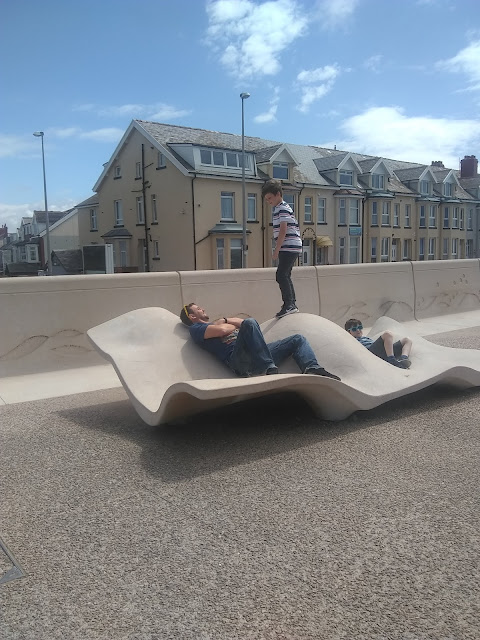 Honestly, I wonder what we all look like sometimes.

Yes.  They did.  And I hear you.  But honestly, sometimes I wish it was just the kids and not also the fourth, large man-child joining in and that we could walk together nicely while the kids play.  That would feel a little tiny bit less like I was in charge of some kind of uncontrollable mass sometimes.

When I finally herded them all back together, there was thankfully (!) a small arcade across the road (yay!) and of course, son number one needed the toilet, so in we traipsed, spending more than we had intended on yet more tickets (which we later discovered we could feed into the ticket counting machine back at the park, so I felt like I was beating the system just a little bit...ha ha, fuck you, Haven arcade!) 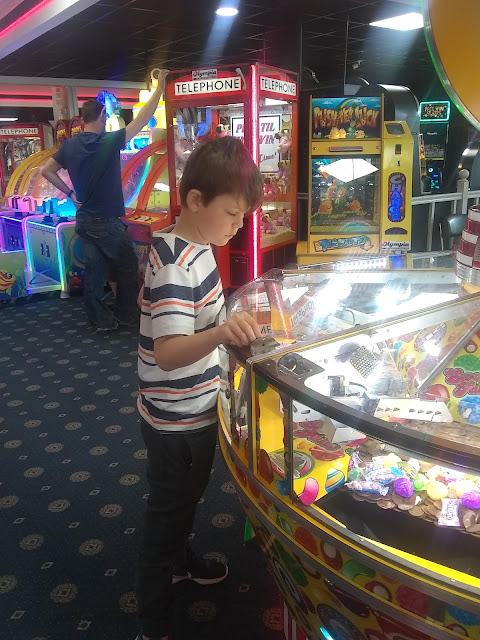 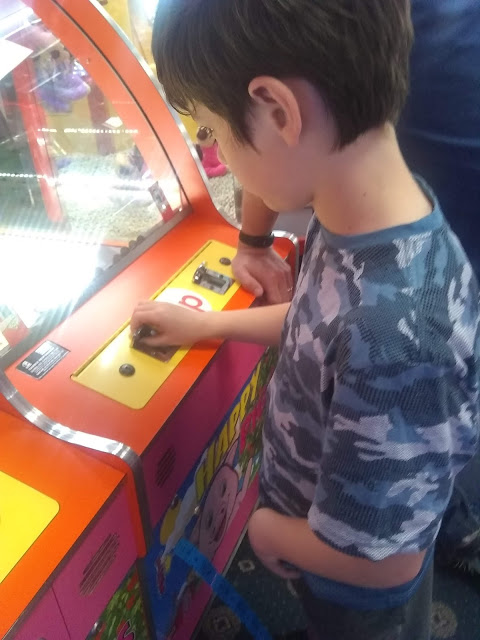 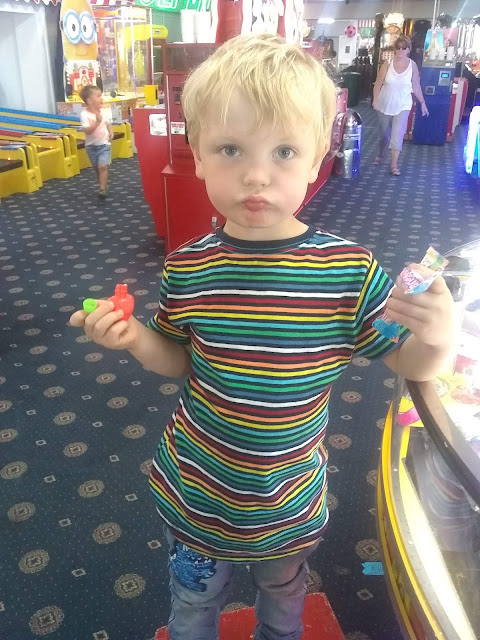 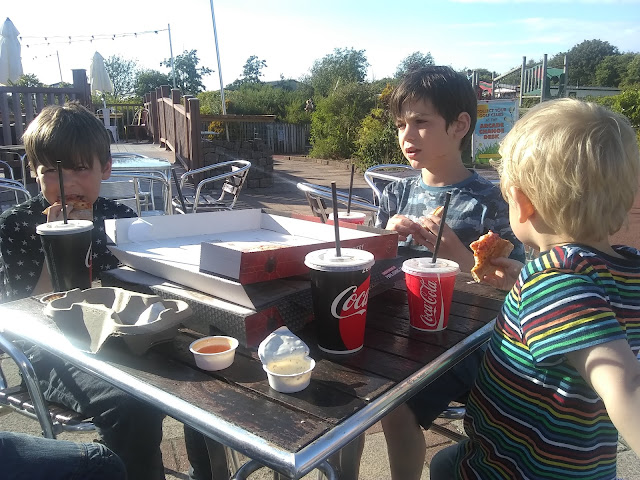 Back to the car and then back to the caravan, where we decided on the camp Papa John's for tea this time (slightly cheaper, kind of) and the back to having the money hoovered out of our pockets by small children who fed it all into the shiny machines.  While I of course wished that I was sitting in the entertainment bit having a glass of wine and watching the kids join in the horrible entertainment instead...but no.... 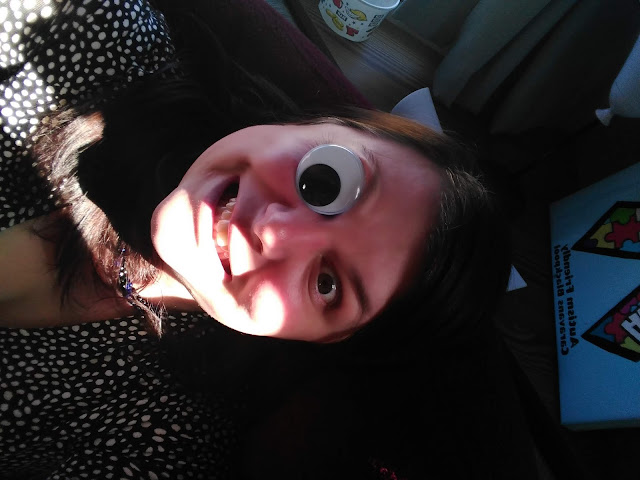