Rebooting my life. Or trying to.

I see other people going on diets all the time - in fact I don't think I know one lady just now who genuinely doesn't monitor what she eats.

Maybe it's an age thing, but even I have started to think about what I'm eating, how much I'm eating, and even more frightening, the effect it all has on my body.

For the first time in my whole life I feel unfit.  I feel fat.  I feel unhealthy.

I drink waaay too much caffeinated diet drink, I eat so much chocolate and don't even get me started on my crisps intake.

My energy levels are down, I'm eating mainly white carbohydrates for that quick sugary energy high and my fruit and veg intake is at an all time low.  I've started to use wine like a carrot on a stick to get to the end of my day, just to get through it.

But that's life with kids, right?  I should be tired, shouldn't I?  Everyone else has the same problem with time and energy and the need for fast food fixes, don't they?

I see all those internet memes about wine all the time.  Everyone 'likes' them because it's true, right? 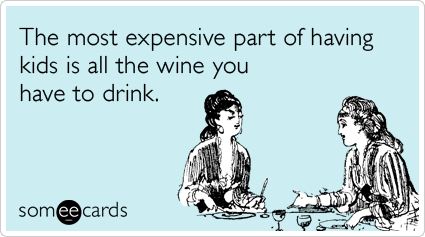 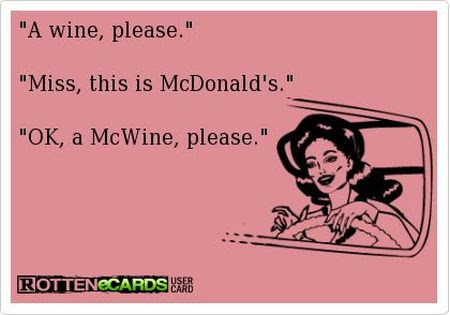 We're all waiting until the kids doze off sweetly (or in my case arse around until they finally give up an hour after I put them to bed) before tucking into our favourite bottle of Cabernet, aren't we?

At least that's the impression I get.

So yesterday, when Ethan was actually playing with Lego on his own for once, I sneaked through to the living room with my 'treat' to myself.  It's something I do occasionally, when I get peace to, and yes, it's something that I do on those rare times when I'm home alone.
Today for example, the first thing I did when I came home after a particularly stressful morning and school run was to grab a bag of Ready-Salted and a (albeit small) Toffee Cheesecake pot with a can of Diet Coke and consume.  And I feel better.

Yesterday was no different; all was quiet on the Western Front, so I grabbed a Diet Coke and a bag of crisps and I sat on my butt and watched grown-up T.V.

For HALF AN HOUR.

It was awesome.  I opened the bag of crisps, cracked open the can of coke and put Netflix on.  Oh yes, I was choosing for myself! Very exciting!

Now I'm always hyper-aware that the peace I'm getting is probably only going to last as long as it takes to wolf down that bag of crisps, so I always do it quickly and I usually choose something to watch that doesn't require much attention.

So when I picked the docu-film Fat, Sick and Nearly Dead it was kind of a half-hearted, ironic choice.  I mean, after all, here I was, stuffing my face unhealthily, the way I do at least once a day.  I didn't think it would have any relevance to me.  I mean, I am still in relatively good shape.  I can still chase the kids down the street and I'm still climbing playground equipment at the park.  Yes, I have put on a bit of weight but I'm not that fat, I'm not sick and as far as I know, the grim reaper ain't got me on his list yet.

Joe Cross, the guy who made this film about his journey rebooting his life and another man he picks up along the way, Phil Staples, who we literally see become half the man he used to be, both seem like a seriously nice guys.  Usually I watch these things with half an eye on the screen, but Joe's warmth and Australian good-humour made the film inviting and engaging and Phil's story and transformation is inspiring.

Joe tells his story candidly, we see what his body is like at the start and we hear all about his auto-immune condition which caused him to be on hard steroid medication for life.

There's some really cool animations to explain all the science - y stuff, and some really interesting social commentary too. Granted it is based mainly in the USA, but with the diet I've been on recently, I felt it was very relevant to me too.

Joe changes his life by drinking just juice made out of fruit and vegetables, and eating nothing but fruit, veg, nuts and beans for 60 days.  The reactions he meets from his friends and family are that they all think he is crazy, but they do have some admiration for him; after all, the man is a self-made millionaire, so his ideas certainly carry some 'weight' (geddit?)  But he loses over 6 stone in the process, his blood work shows a very healthy change to his system, and by the end of the film, we discover that he has attained his goal of eradicating his need for any medication.  He has changed his life.

Phil Staples, when we meet him, is a truck driver.  He has been eating on the road for 8 years and his diet mainly consisted of fried foods found at truck stops.  He gives Joe a call in a moment of desperation, and Joe wings it over the pond from Australia, juicer in hand, to help him start a ten-day juice diet.  Phil finds it hard at first, but his motivation never waivers, and he perseveres after the initial ten days, extending his reboot even further, losing half of his body weight in the process.  It's amazing to see the change in Phil and the change he makes to his whole life; he even changes his job so he can stay more active.  I really found myself rooting for him.

Soon, I was hooked.  I paused it half an hour in and watched the rest while Ethan was at nursery in the afternoon. This time, no crisps!

Last night, when I went to the supermarket for the packed-lunches food, I wandered up the book-aisle and there it was, the book of the film that I'd just watched that very afternoon.  Unlike me - as I said, I hate diets - I bought that damned book, and I took it home and I sat down and read it.

I really had thought that this film had been just one of those faddy docu-films that Netflix seem to harbour, but it's taken off enough that Joe Cross is making a fine business out of it, and helping loads of people to boot. I made Dave watch it again at night.  He agreed with me; it was a very interesting concept.

We both agreed that yes, our diets are atrocious at the moment.  Yes, we both crave processed, refined foods.  And yes, our energy-levels, our skin, our mental attitudes all probably suffer because of it.

Part of the idea of a reboot is that you are:

The book is fab - it's written in Joe's easy-going manner, but with complete facts and relevance.  Everything you need to give this a go is in the book - apart from the juicer of course - but he even goes as far as to help you with that too, in a section about how to choose the right one for you.  there's recipes, a substitutes list for any veg you don't like/can't get a hold of and a full run-down of what to but for all the different plans.  It's not heavy-going and you can easily skip to the different sections which are relevant to you.

I've been on his site this morning www.rebootwithjoe.com and there seems to be lovely community to go with it all.

At the end of the day, Joe is businessman with a lot of savvy.  He knows a success when he has one, and I am usually very skeptical of such things, but I really do think I am going to give this one a go.

This afternoon I am going to try to find me a reasonable-priced juicer (the one he's plugging, although very nice and obviously awesome is well out of my price-range)  and take the plunge.  I'm going to find time to plan a three day juice diet initially, following the book and if I feel fine after that, I'm going to continue it into ten days.

I guess sometimes you just need to find the right thing to inspire you, and this has done it for me.  So here goes!

If anyone else has been following the Reboot Juice plan, or has completed one I'd love to hear from you.  I've sincerely never heard of it until yesterday, and I'd really love to see how practical or feasible it is for a mum to two small boys and no time!

I'll be sure to let you know how it goes.