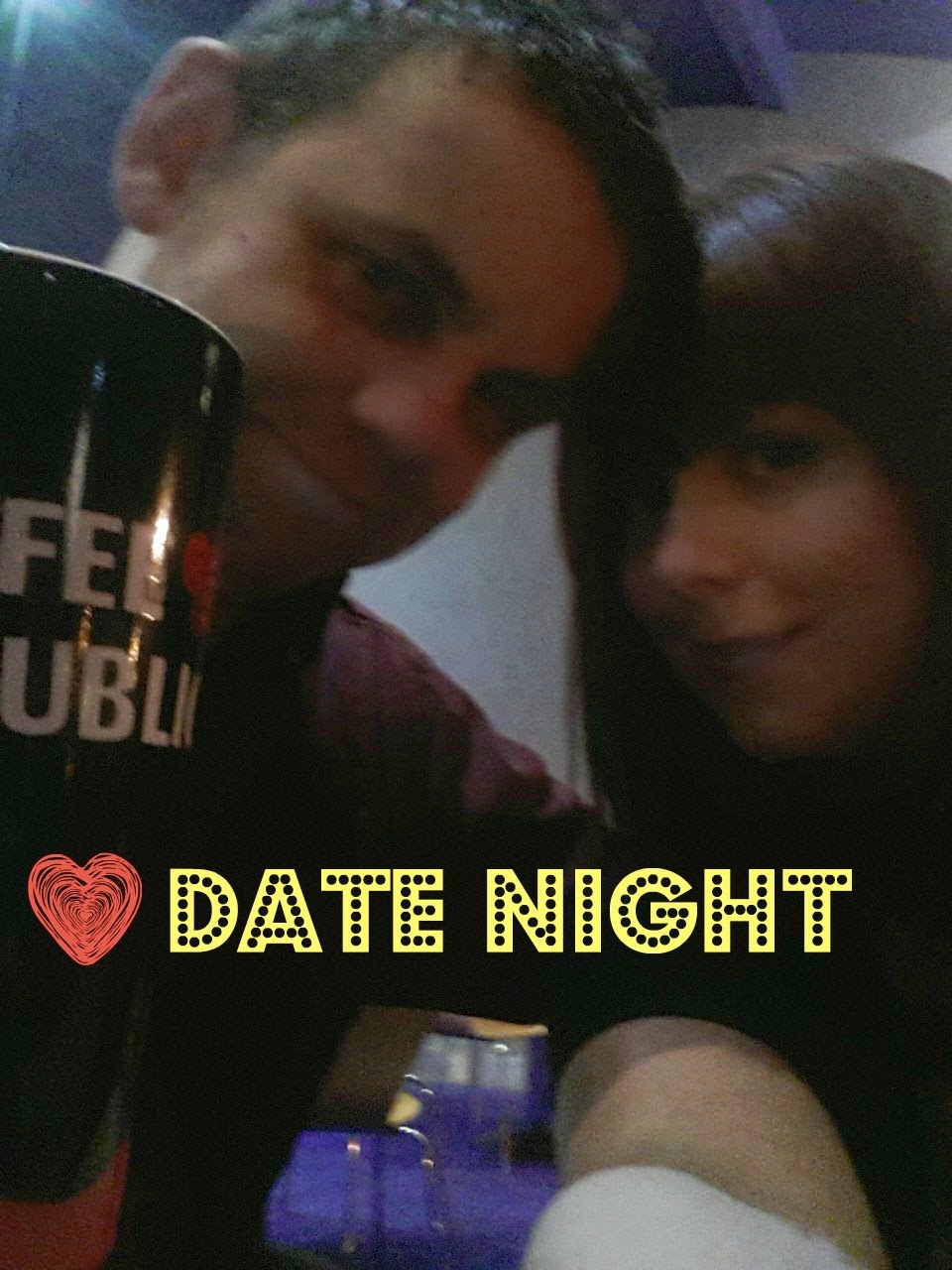 My husband and I have been married now for 5 years and together for nearly 11.

We've known each other since we were about 13, and pretty much grew up together.

Our relationship is a very deep and special one - we are very lucky.  But like all couples, we still need some special time alone to catch up and re-invigorate.

It is possible, as I have discovered, to really miss your husband when you get caught up in the mundane everyday, and although we spend a concerted amount of time as a family, we never really spend time gazing into each other's eyes over candlelight.  Which is important.  Candlelight is very flattering.

Hence, I poked and prodded him, and bribed my mother with the promise of dinner if she would babysit for us, and lo and behold!  He took me out!

As our lives are both quite hectic, we ended up doing what we usually do when presented with a night to ourselves; we winged it like a bastard.

Me: 'What do you wanna do tonight then? (hopeful gleam in my eyes.  I'm imagining a meal, the theatre and getting very drunk on champagne.  It's been a wee while since we went out)

Him: 'Err, I dunno.  Fancy the cinema or something?'

Him: 'Are you getting ready then?'

Three hours later.  Dinner is over.  Kids are still running riot.  I'm still in work clothes, hair mussed from where Ethan has had me pretending I'm a scary monster by wrapping my head in my scarf and I've wrestled him off)

We never go out.  We certainly don't go out often enough.

We are not used to this. 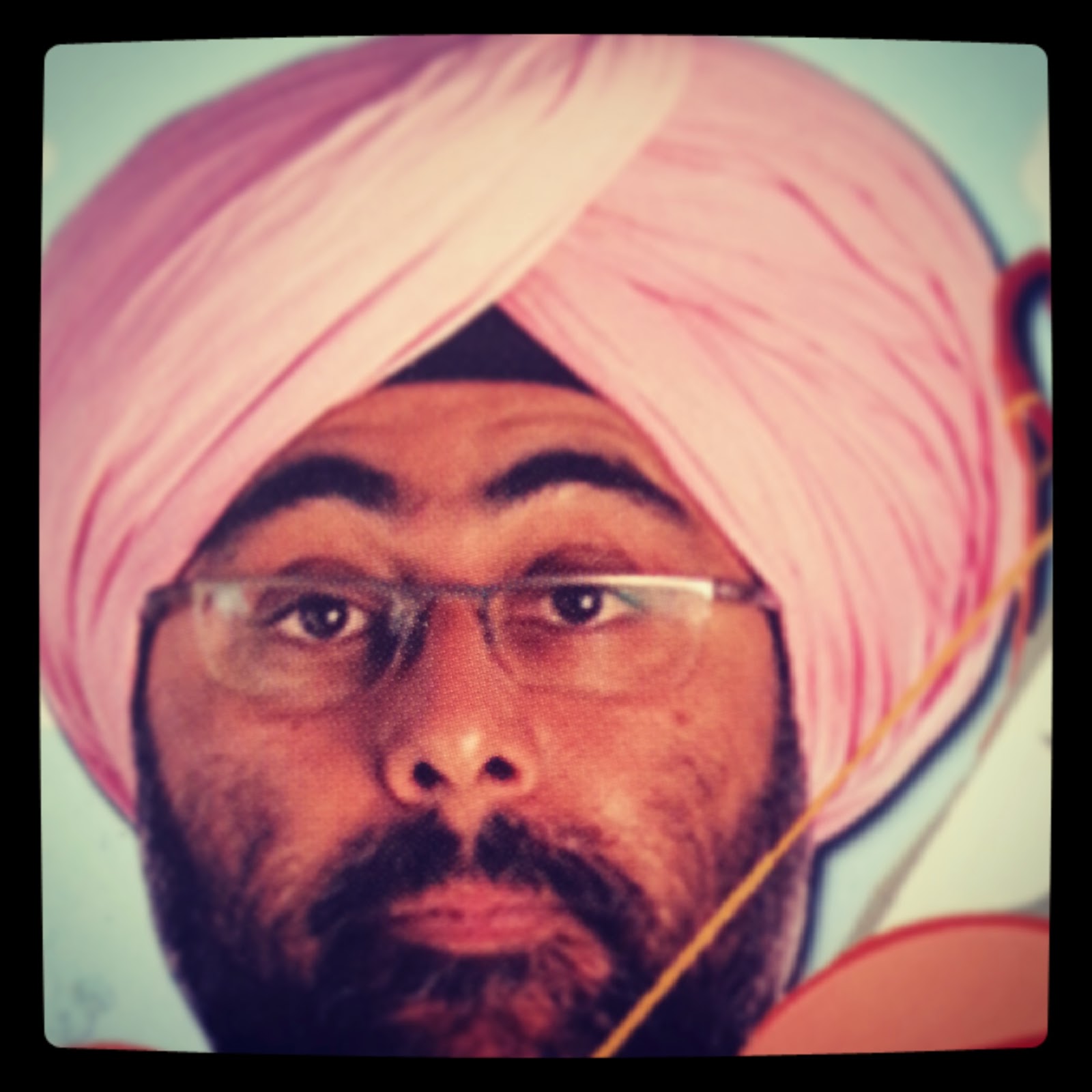 Dave took the initiative in the end and we plumped for the fabulous Hardeep Singh Kohli, who was doing a gig at our local theatre.

Hardeep is a Scottish, Sikh comedian, and one we have seen a couple of times before.  The last gig of his was Chat Masala, a show where Hardeep cooked while being very funny (I'm sure this was after he'd won Celebrity Masterchef).

And last time, being one of the only vegetarians in the audience, I scored a bowl of his delicious vegetable daal.  I was certainly keen to see him again - even if there was no daal this time (which by the way was the most delicious daal I've ever had!)

I love Hardeep - he always comes across as warm and honest, and his comical stories about growing up in a Sikh household in Glasgow are very funny indeed.

People from Glasgow always have that kind of edge to them that only comes from having to grow up and survive in such a schizophrenic place, and 'weegie' comedians in particular always have a place in my heart. Dave's family are from Glasgow and so are half of mine, so I think we can both relate to a 'tough but fair' Scottish childhood, which is best observed with a comedic air.

I think we can safely say he's on our level.

So when we bought the tickets at the desk, having made our last-minute decision, we were delighted to find that the topic of his tour focuses on Love. 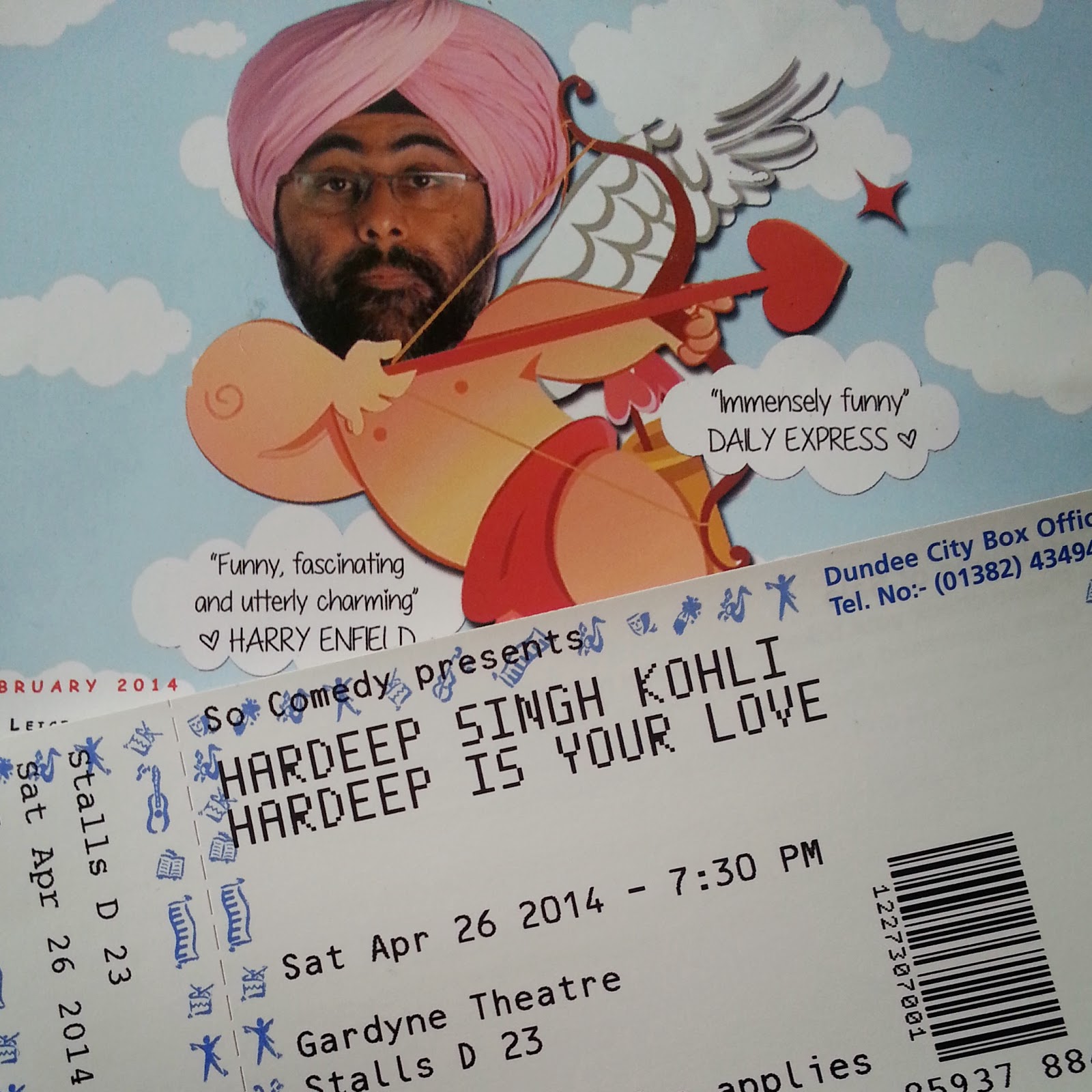 Comically entitled, 'Hardeep is Your Love', we had a great laugh at Hardeep's tales of love lost and found, stories of sexual encounters and the very intimate audience, which allowed for a few belly laughs.  A man in the front row (Dave - not our Dave though!) was picked on and dug himself a wee pit of despair as he pretty much outed himself as a bit of a ladies' man.  Another,  a poor 17-year-old-girl, Rebecca, was harangued throughout the show and embarrassed wholly in front of her parents who sat either side of her. Poor girl.  Wrong show for her!

All in all, it was a great show.  Thankfully, we did not get picked on, although I would have loved to have challenged Hardeep's claims that he knew how long folk had been together for based on their body language.  People never believe that Dave or I are as old as we are and are usually almost disbelieving when we say how long we have been together.  We like to shock.

We certainly are hoping to catch Hardeep again in the future.

Afterwards, we traveled home, although it was still slightly early.

We live across the road from a wee pub called The Milton Inn though, and so I parked the car around the side and we headed in for drinks.  It was the first time that we'd been in since we moved to the area and we were pleasantly surprised by the table service and warm atmosphere.  It's nice to know that date night could just happen straight across the road if needs be!

We put the world to rights, hashed out old wrongs and spoke about what we wanted for the future.  It was great just to reconnect a bit.  Just what we needed.  There was no meal, no champagne.  Just a couple of beers too many, a wee candle (see, I got my candle!), a lot of laughs and some proper talk.  Which is all we need after all this time.  We left the inn, hand in hand, a wee bit tipsy and very happy.

And we always say this, but now it's in writing in public:

We should do this more often.