We have spent the last two weeks fielding tantrums of the worst kind, dealing with bad behaviour, courting questions from two small, very excited, very anxious children about what is going to happen on holiday, how long we are going on holiday and how long it's going to take to get there.

Ethan has spent the last two weeks flipping out at the smallest things - the amount of milk we pour in his cup 'want it bigger!', getting to wear his wellies to nursery 'they my crocodile boots, my not like shoes!' and going to sleep at least two hours after being put to bed 'my. not. TIRED'.

He was, clearly, very bloody tired.

Dave spent the last week knackered after being away (in Edinburgh, har de har) at stupid-o-clock in the morning for training sessions for his job, I'm knackered from dealing with all of the end-of-term stuff plus work, plus the fall-out from what can only be described as annual pre-holiday hell courtesy of two small excited children and in short, we are all completely done in before we get there.

But when we get to that train station on Monday morning, bags packed with more teddy bears than we told them they could take (we didn't find out just how many Ethan had sneaked in until we got to the hotel) and picnic at the ready, we were all extremely relieved to be finally on our way.

Going anywhere with two small children is always going to be hard work.  You must plan everything to within an inch of it's life.

This is where the problem lies - I am a planner, Dave is not.  And when I am not carrying my A-game because I'm knackered, stressed and basically completely finished, then my planning ain't all that either.

Thus our Edinburgh trip, although it had a basic framework to it, didn't have the precise information needed to make it a completely stress-free and happy trip.  Yes, we had fun, but like most times when we go on holiday with two erratic balls of energy, we came home feeling like we really need a holiday!

Do yourselves a favour when planning a trip:


That being said, we did have some great fun and the kids had a great time - which is all we went for. 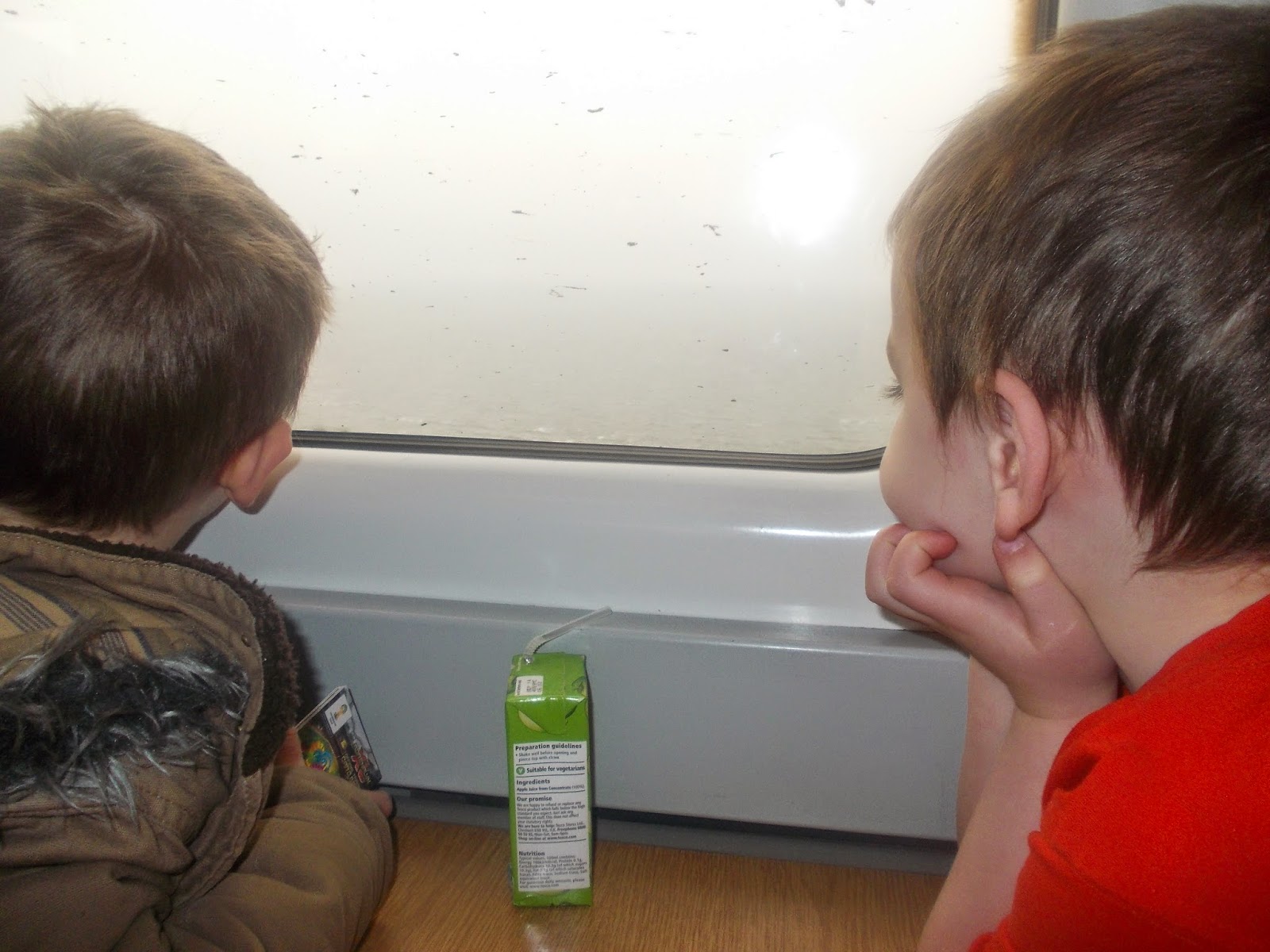 It was Ethan's first time on a train, and Tom's first time for a wee while, so this was actually a very pleasant way to spend an hour.  Once we were on the train (and the food was out of course), the kids just sat and chilled out and enjoyed the view from the windows as we went over the water.

The train was very busy and all seats were booked.  Like all under-5's, Ethan didn't have to pay for a seat, but this also meant that he didn't have a seat.  We were fortunate that we'd booked a table seat, thus nobody wanted to sit beside a family who were engrossed in eating and chatting total nonsense to each other, but if someone had seriously needed that seat, we would have had to give it up.

I do think train services should think better about placement of family groups on trains - especially as they charge so much.

Passing the Mound precinct, we came across an outside gallery of a celebration of fluorescence in nature, called Living Lights 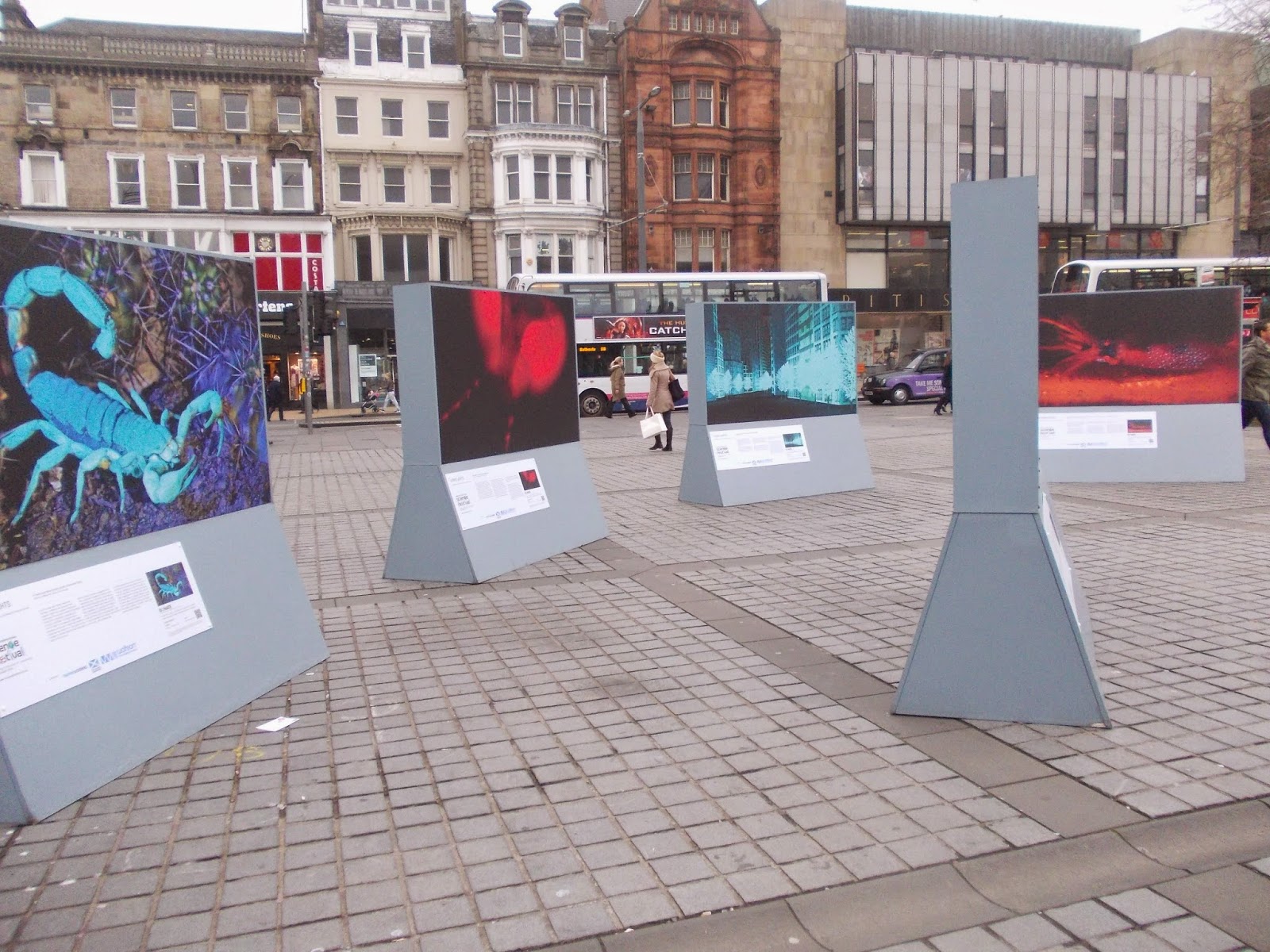 We spent about half an hour here just wandering around and having a look at this huge and interesting display.  Tom was really surprised to learn about all of the natural colours in nature and why animals and plants use them.  It was cool to see art on such a large and accessible scale too. 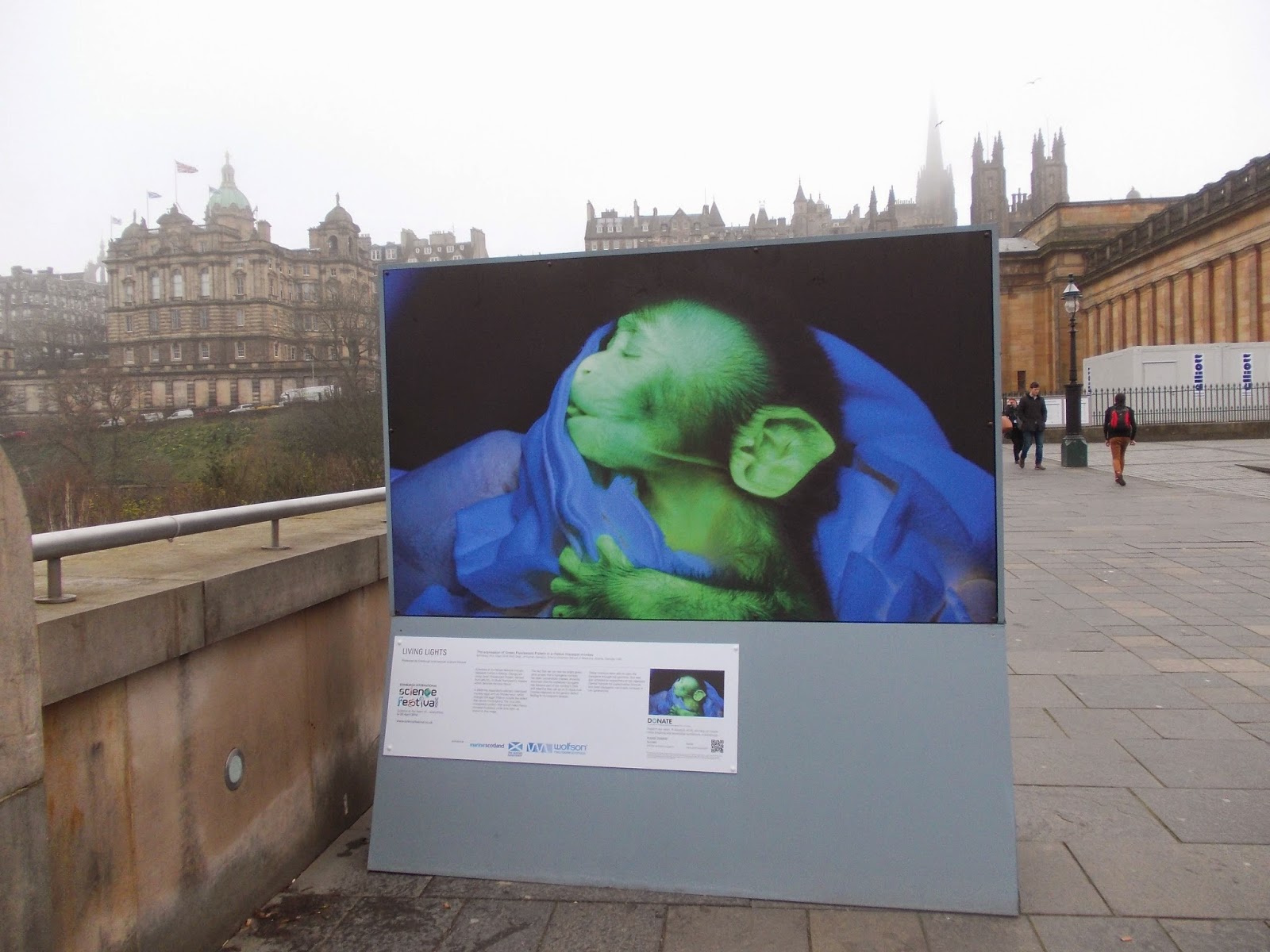 This is why i love Edinburgh - so much culture and art in one place, just naturally cropping up.  there's always a chance to learn.  It must be great to pass something like this on the way to work every day!


I couldn't resist popping into the National Library - and they had an exhibit on about Scotland's Inventors.  It was a great excuse to have a nosey around and the kids loved seeing what we had come up with as a nation.  Plus, they are housing some of the gorgeous book sculptures which have been mysteriously appearing in libraries all over Edinburgh.  I saw them on tour a year or so ago and it was great to see the most recent ones on display.  If you've never heard of them before - check them out here

They are absolutely fascinating - and anonymously donated to various different libraries, each purporting the cause of libraries and their importance to society.


The museum was awesome.  The first thing we saw was the T-Rex skeleton, intermingled with other prehistoric and endangered critters.  This huge building is just filled with inter-active points of interest and is very well laid out.  We only had the afternoon, but after spending at least four hours in here, we were all exhausted. 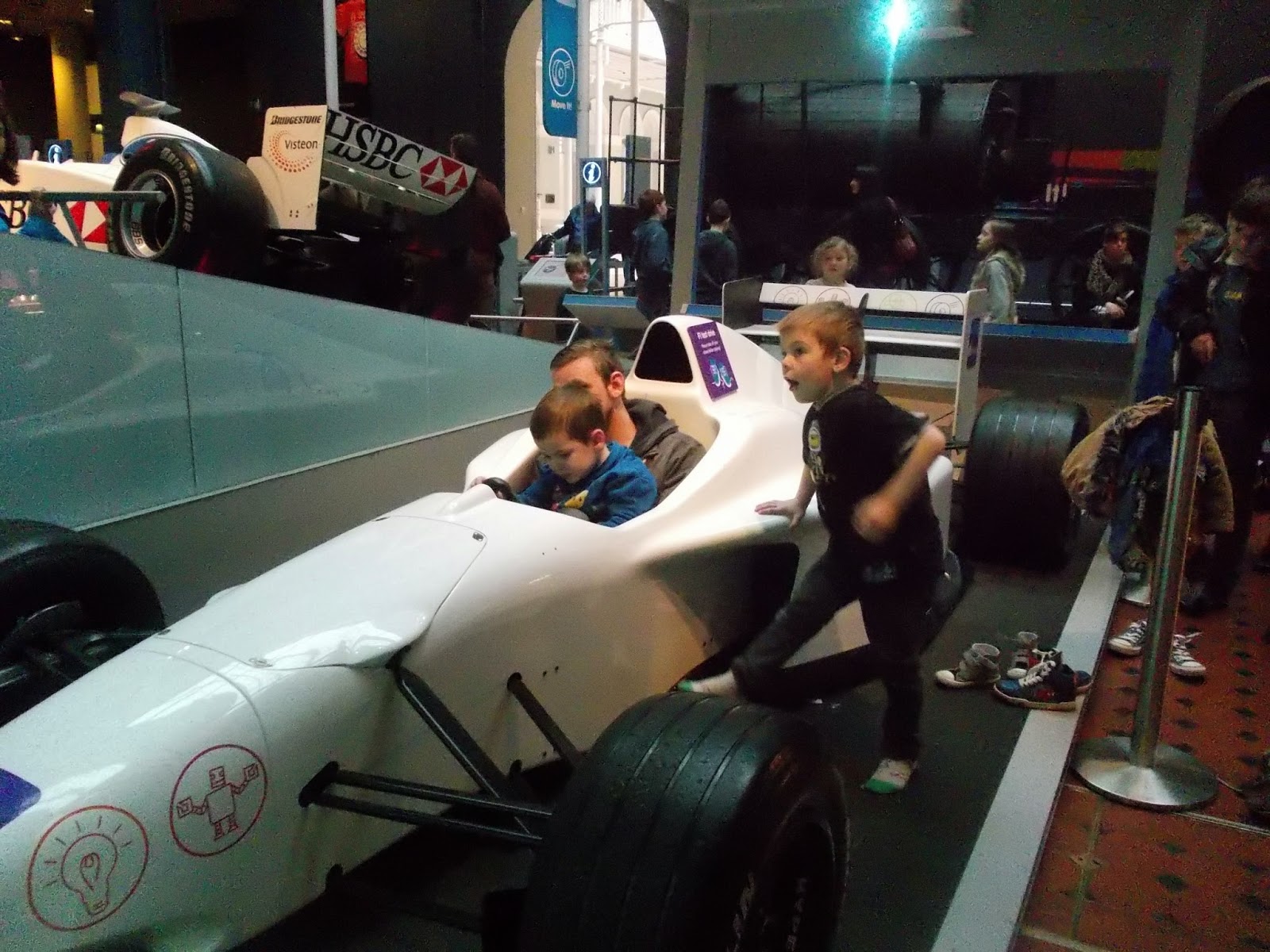 My only gripe was the price of the cafe.  Trying to get a mid-afternoon snack to refuel a bit and get some more energy to carry on, we sat down in the cafe on the balcony.  Dave came back to our table with four medium-sized tray bakes and four cans of juice. Grimacing, he informed me that our little treat had just cost us somewhere in the region of £17!!  That was definitely a learning curve.


Our last inch of energy was given to the lovely children's area tucked away in a corner of the building, which had a dino-bone dig, dressing up boxes, tree-house and science experiments for little hands.  It was so good just to chill out here for a bit after trailing around and let the kids run free for a bit.
It was a lovely way to spend an afternoon, but we were really tired afterwards - and we still had to walk back to our hotel, which although was city centre, was still a fair walk for wee legs. 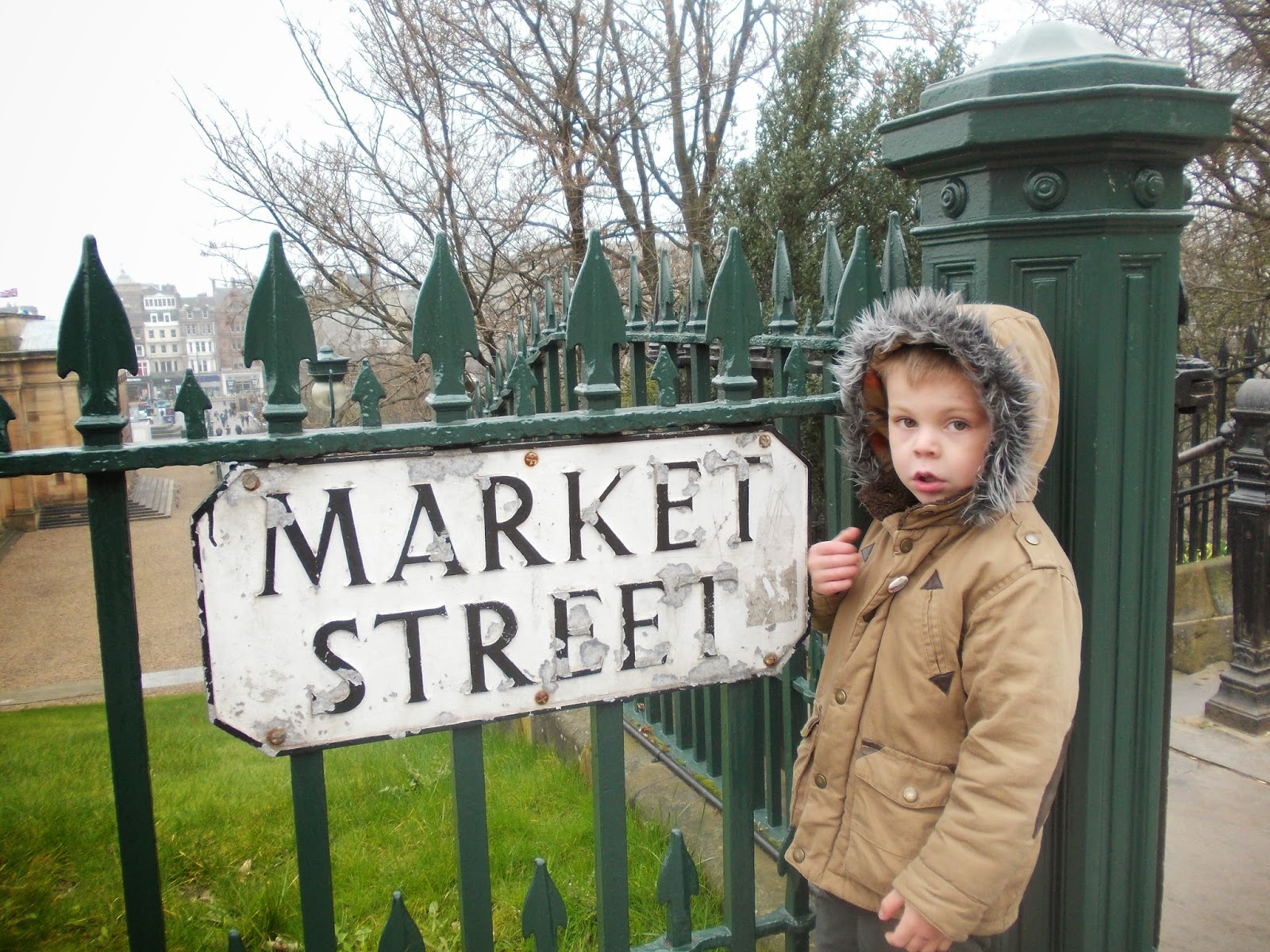 We did have a cheeky pit-stop at Pizza Express on the way home.  I would definitely recommend this place!  The food was amazing, the service was second-to-none and the kids were treated like royalty, even leaving with their own chef's hats at the end.  It was quite pricey, but we never eat out any more and we were on our holiday, so we tried to forget about it!

Chilling at the Hotel! 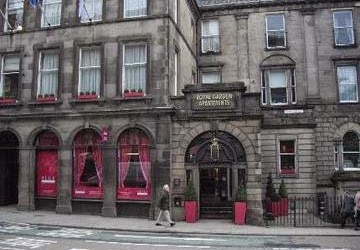 The Blue Rainbow Apart-Hotel was really good - a good value for money stay and somewhere I would book again without hesitation.  We were left to our own devices, everything was clean, comfortable and uncomplicated.  The location was great too - just a stone's throw away from anything you need and right opposite the National Portrait Gallery.  They were kind enough to let us check our bags in early too so we didn't have to lug them around Edinburgh, which would have proved painful!

All in all, a great first day's trip, with lots of little extras packed in.  And yes, the kids went to sleep with no complaints!