What The Blethering Boys are Playing Today: Scattergories - Adapted For a 5 Year Old! 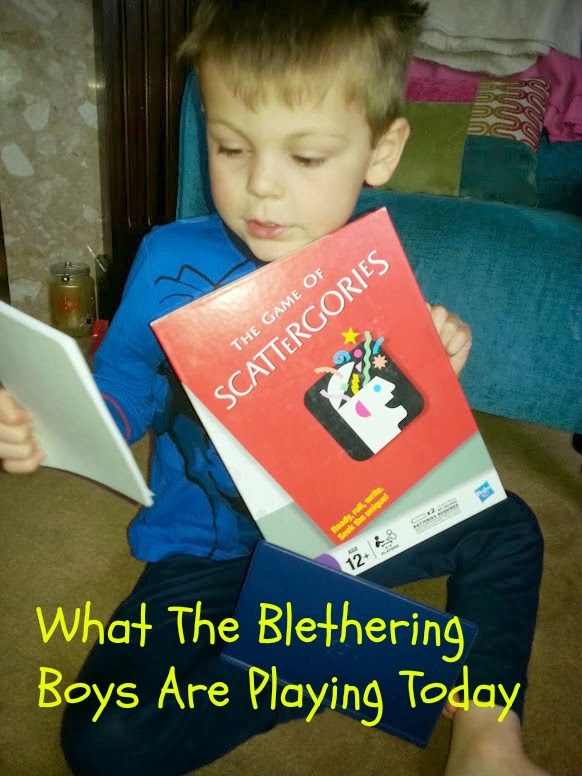 It's a horrible day outside - raining, soggy and we even had some Thunder and Lightning!

Tom's still a bit under the weather (see what I did there?  I'm a comedy genius!) and both boys are getting a bit bored, so i decided to mix things up a bit today and pull out a board game that Dave had brought home from his work for the adults to try. 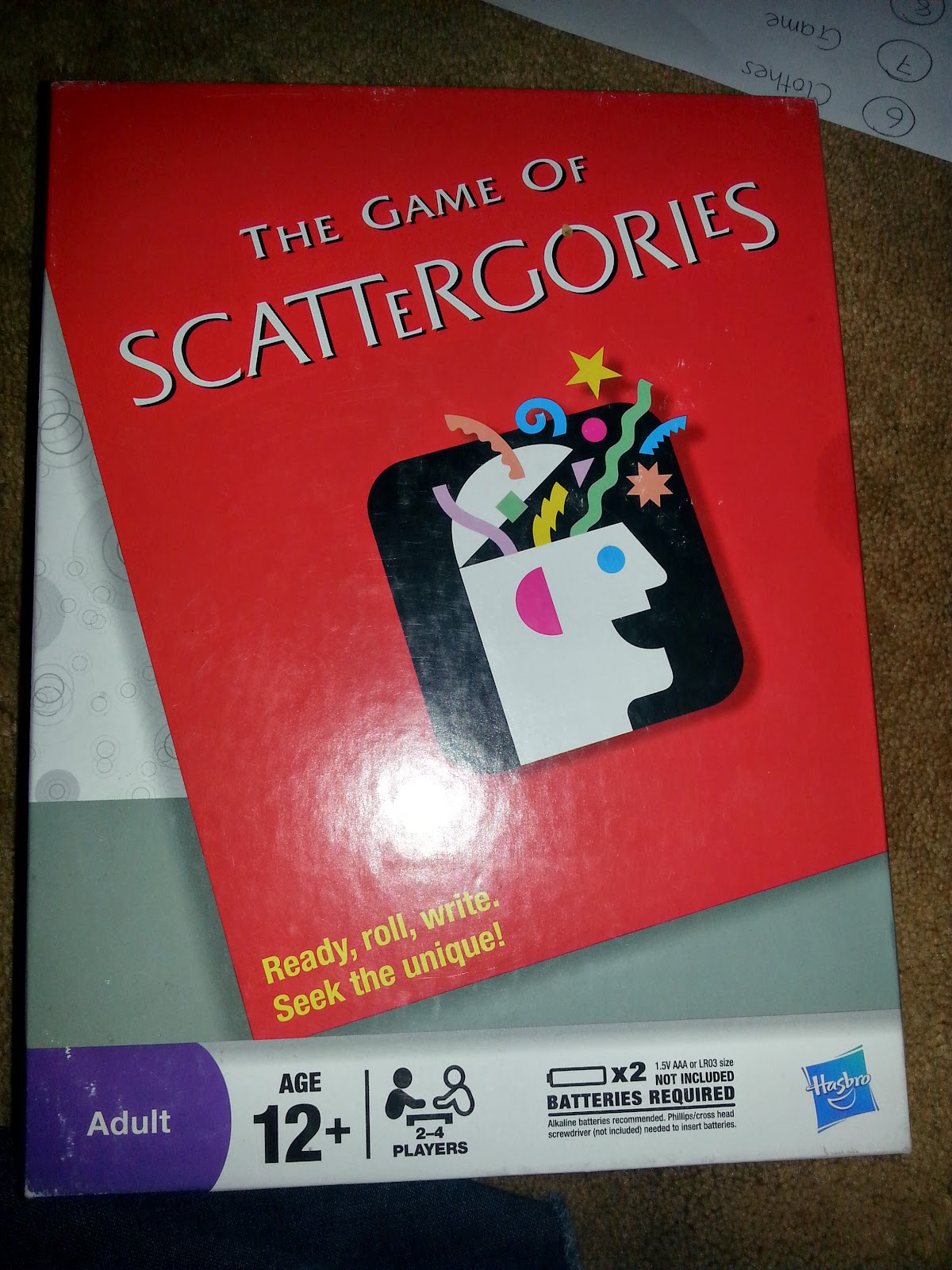 Scattergories is an adult game - if you notice the age recommendation is 12+.

But I'm a bit of a rebel. I believe that there is merit in ignoring age bands and adapting board games like this to suit.

After all, you'd be missing out on learning outcomes like: 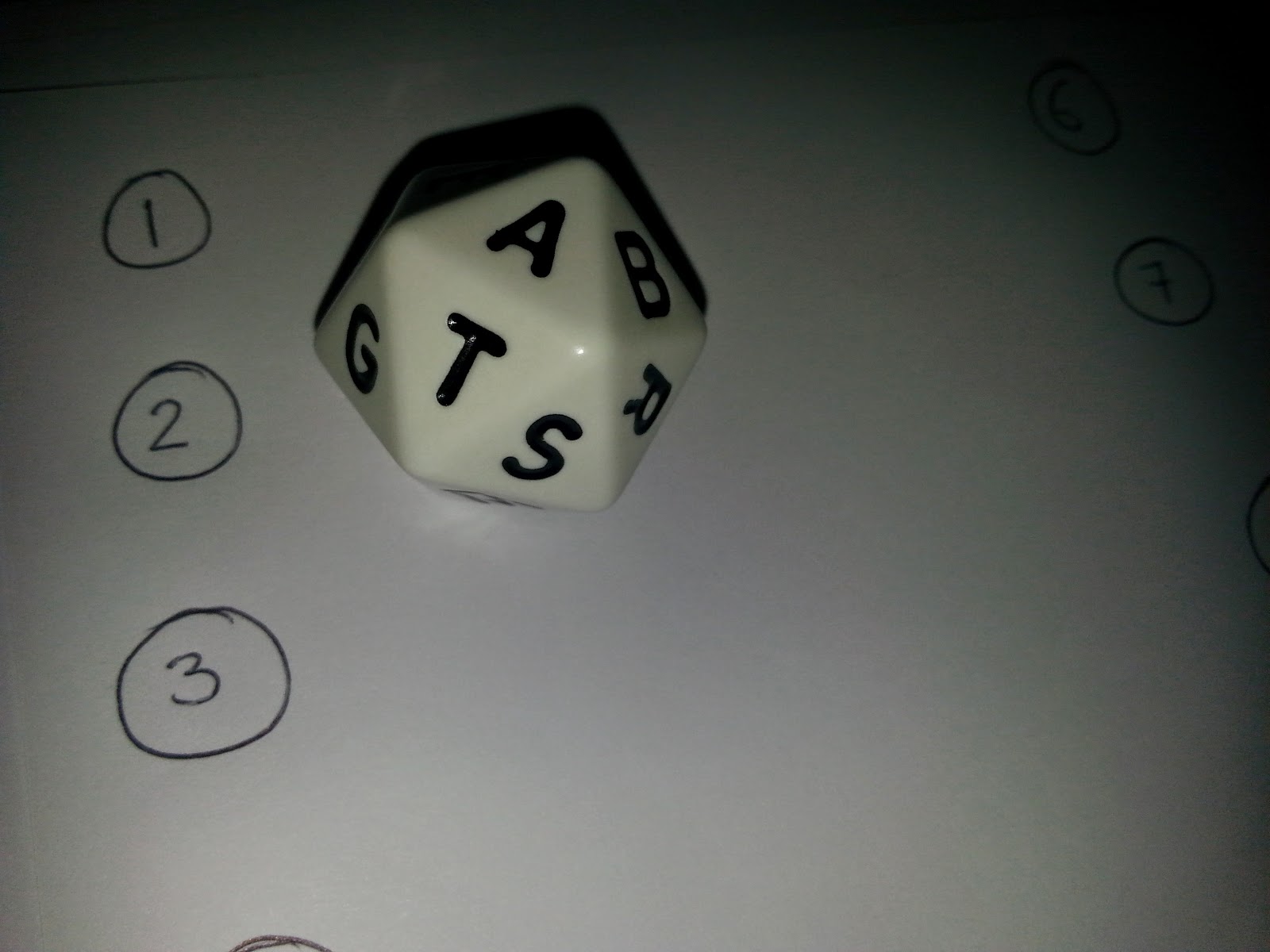 Now, in the adult version of this game, you roll the letter dice ( I have no idea what you call such a thing as a many-sided letter dice, so here we'll call it 'Gubbins') and the letter that you land on is the letter you then have to use to find a word beginning with that letter of something that belongs in a set category:  i.e; Categories are: Animal, Book, Film, Country etc.  The letter you rolled is C.  therefore you have to find an Animal, Book, Film, Country etc. all beginning with the letter C, but against a timer.  The person who has guessed the most when the buzzer goes, wins. 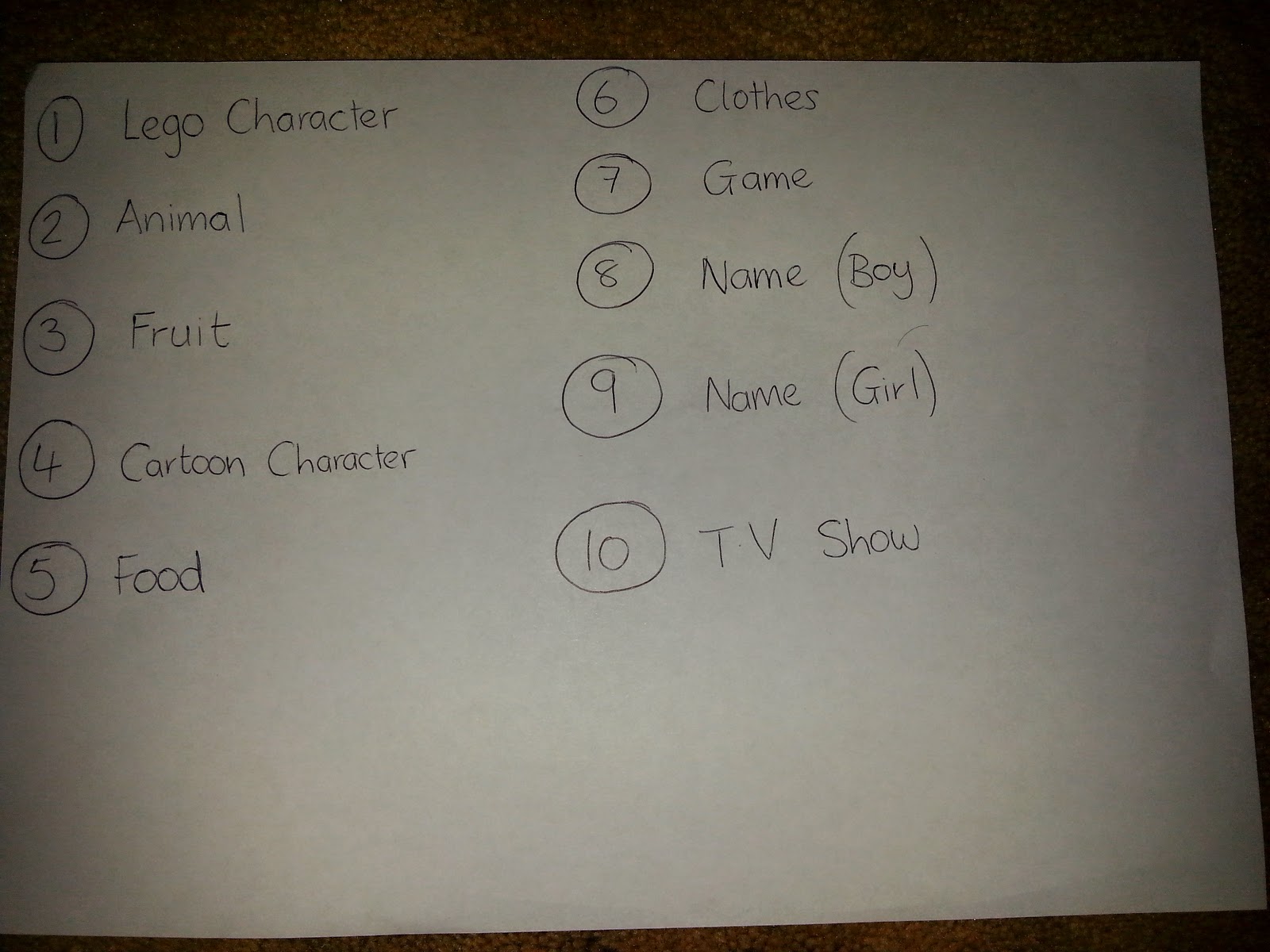 I started by writing new categories that were relevant for Thomas.  i wanted him to enjoy it and for it to hold his interest, so i added things like Lego Characters, Cartoon Character and Food (that boy is always hungry - he thinks about food a lot!)

After explaining the rules, Tom was keen to get cracking - rolling the cool Gubbins and getting to race against the timer was something he found both fun and exciting.  He's nothing is not competitive (can't think where he gets that from!) 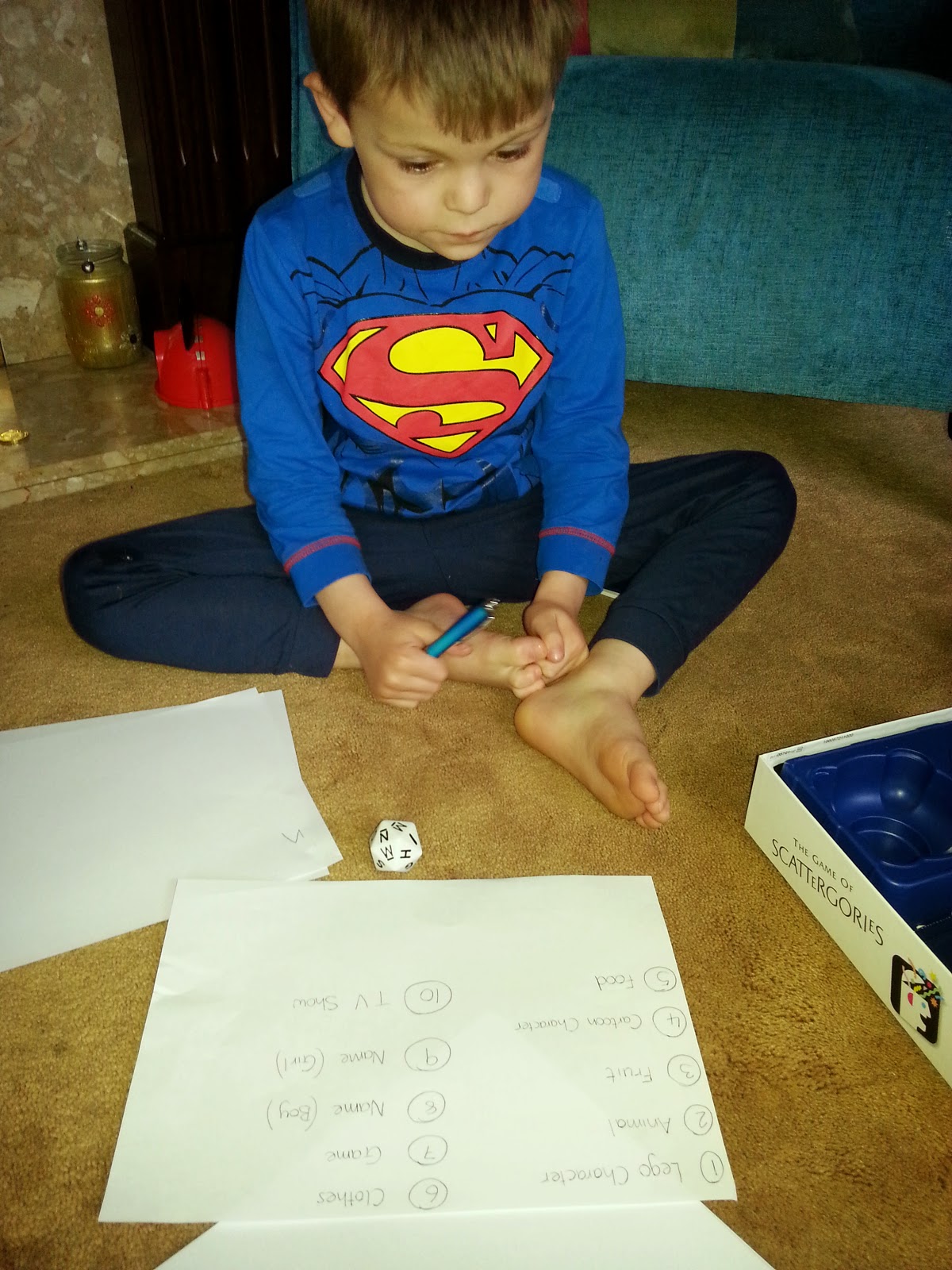 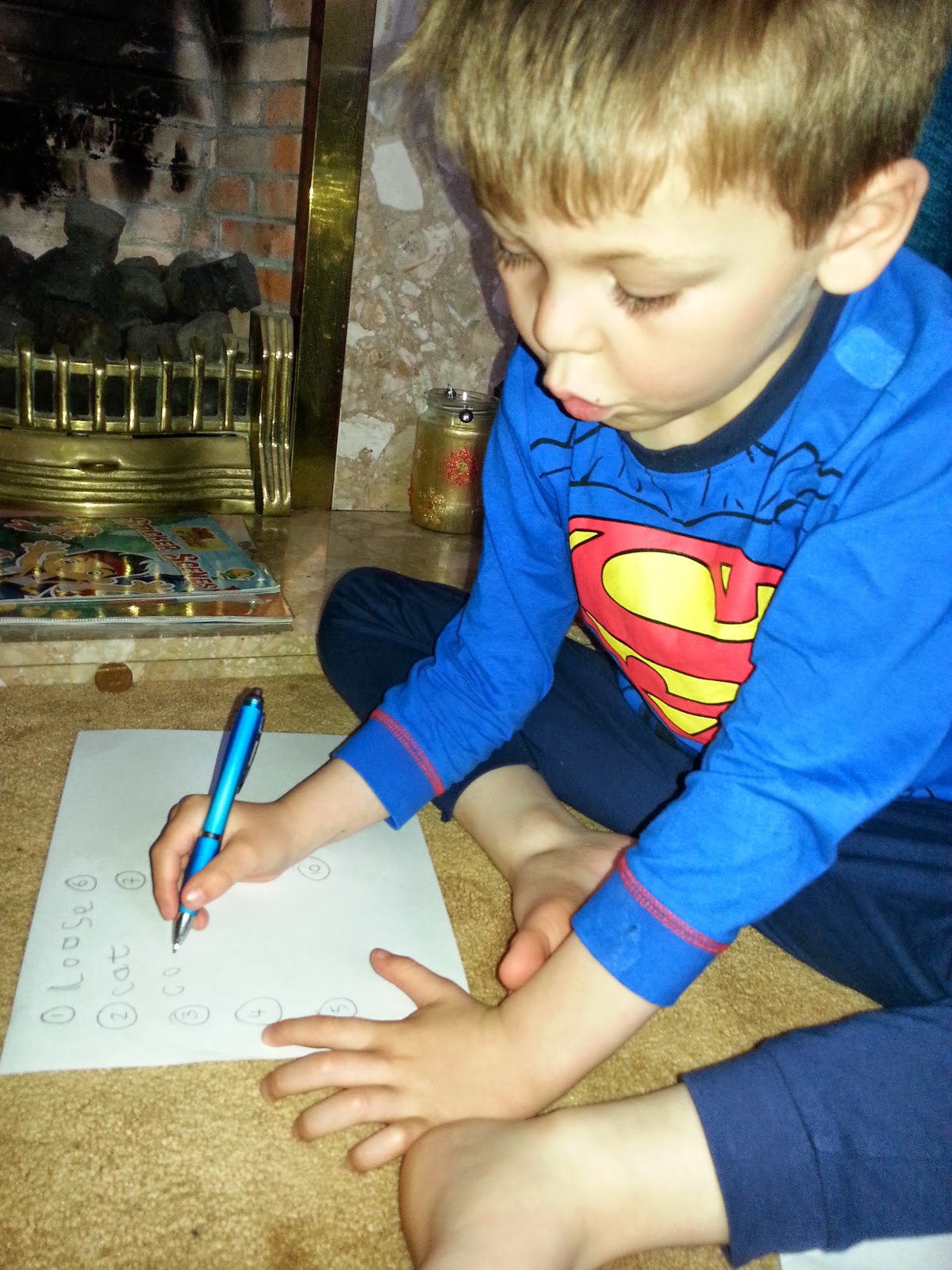 We might have reset the timer a couple of times to get his answers down, but he was chuffed when he had a completed list and we could begin the process again with a different letter. 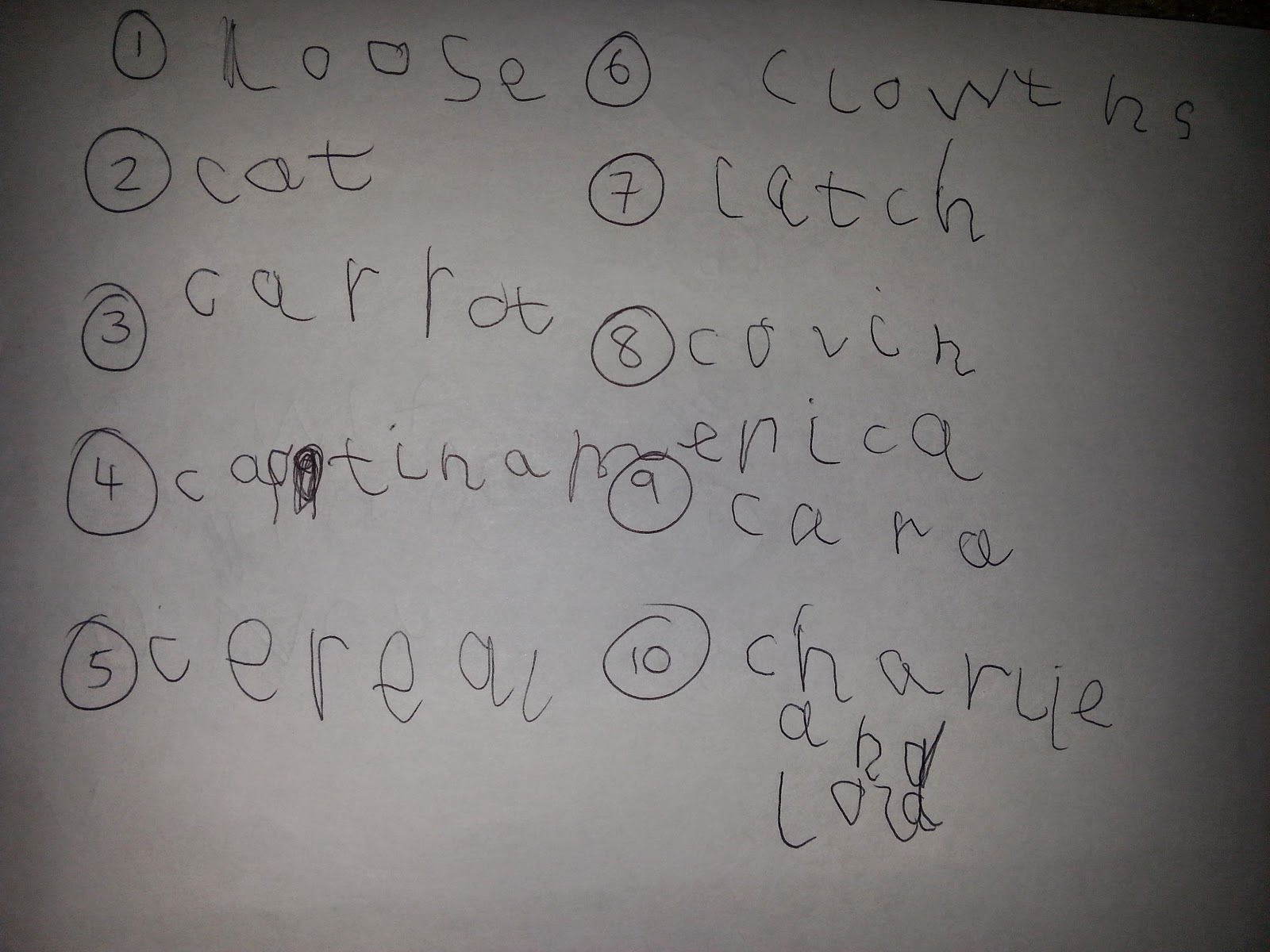 This was a great exercise for him - he got to practice his reading, writing and recognition and his grey matter got a break from boredom.  Obviously it was quite slow-going, as he is only 5, and quite new to the whole writing game, but he did really well.

Ethan chilled on the sofa and listened to us chatting about different letters and sounds, quietly absorbing what was going on, and throwing in the odd answer.

As you can say, we played around with words and had a laugh, which is the main thing.  It's got to be fun.