In 1995 I rode my first Arrow Rollercoaster.

Custom built for The Pleasure Beach, Blackpool, The Pepsi Max Big One was, at the time, the tallest and steepest rollercoaster in the world. 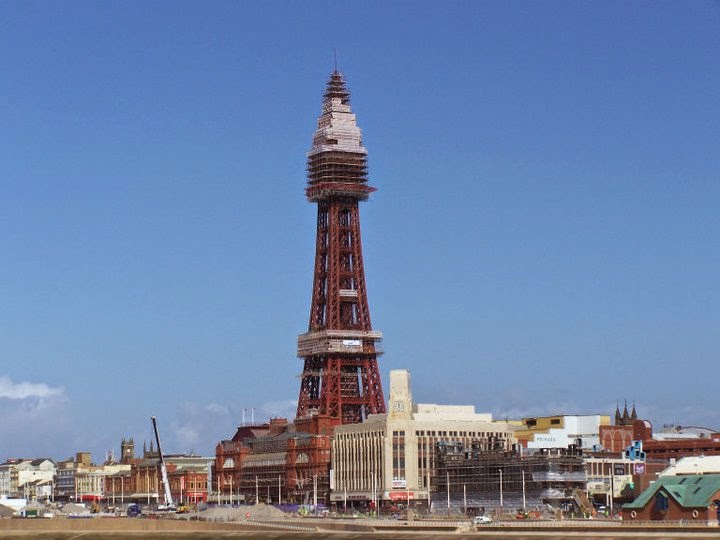 The hype surrounding it, for me, was intense.

Every year, since I was a wee girl, we had been patrons of the Pleasure Beach - a theme park whose heritage has inspired the theme parks of today.

My best childhood memories involve sitting on the the children's wooden rollercoaster, being flung around on The Junior Whip and torturing my Grandad's arthritic back on the teacups.  We'd spend hours playing Prize Bingo in the stall beside The Alice In Wonderland ride, queuing for 'just one more ticket, please' and watching the adults ride the bigger, faster, scarier rides, hoping that one day I'd be big enough to go on. 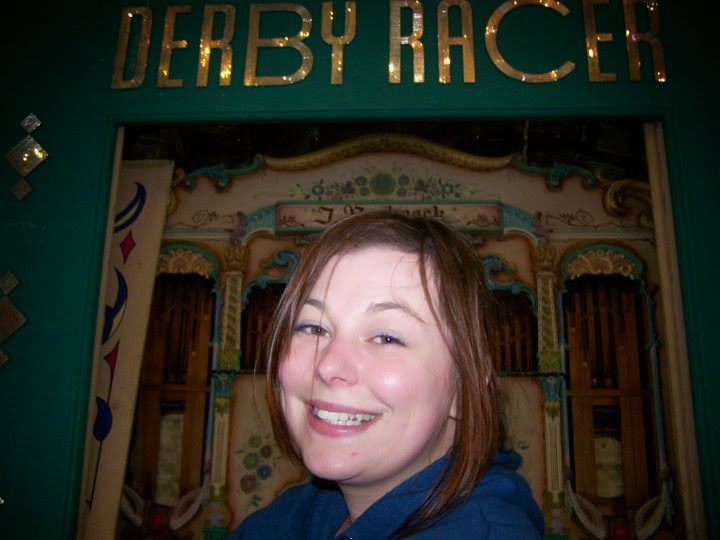 There was nothing better than taking a stroll around the park at night, when all the lights were on, and the magic infused itself into the whole atmosphere.  Those were the best days and the most amazing nights, full of fun-fuelled screams, the smell of popcorn, freshly-made doughnuts, chips and rollercoaster grease.

The year that The Big One was built, I was too short to ride, by just a few inches.  I was absolutely gutted.  At 12 years old, I was rather small for my age, but I was also the biggest thrill-seeker and prided myself on being a seasoned white-knuckle rider.

The other coasters in that park had shaped my passions.  From the children's wooden coaster (The Zipper Dipper), the aptly named Rollercoaster and the Big Dipper to the racing double whammy of the Grand National, I had grown up on a diet of old-style, real wooden racers - each of them unique and equally full of character.

As I grew up and returned to the park, year on year, the surroundings changed, but the rides stayed the same - old faithfuls in a world of nauseating new thrill rides and seemingly ridiculous and sometimes overbearing health and safety rules.

Riding these coasters became not only about the thrill and the speed, but about nostalgia and a love for an age which passed all to quickly.

Returning only annually to an old haunt, you become sensitive to any change which has happened in your absence. And as funding, commercialism and consumerism rose to the fore, some of my old friends began to disappear from the park.

The much-loved Log Flume replaced by a new steel rollercoaster, the Junior Whip out of commission, the Turtle Chase where my sister and I had screamed with laughter, fallen into disrepair, never to return.  Some rides came and went too - mere carnival rides to placate the masses while they waited for the next 'big thing' to happen to the park - something which some are still waiting for.  They'll never be satisfied.

A change in management, a double-dip recession and security features changed the place I knew and loved so well into something I barely recognised.

The year that I became a student at university was the year I took all of my friends to visit. It was the year before they closed the Haunted House; a ride which I had been gathering my courage to enter since I was a kid.  I entered it now with my friends, screaming with equal parts fear and joy at the ridiculously un-frightening bits and pieces laid out within the walk-through ride.  We had such a great time that year - being the park 'professional' I was the one who pointed out all of the tips and hints about the best time to ride, the best seat to sit on and the rides which offered the most screams.  We had a ball. Timing our visit to coincide with the Illuminations in Blackpool, we somehow and totally by accident managed to be in the Big Wheel that sat on the end of Central Pier when the lights were switched on in the whole resort.  What a view! 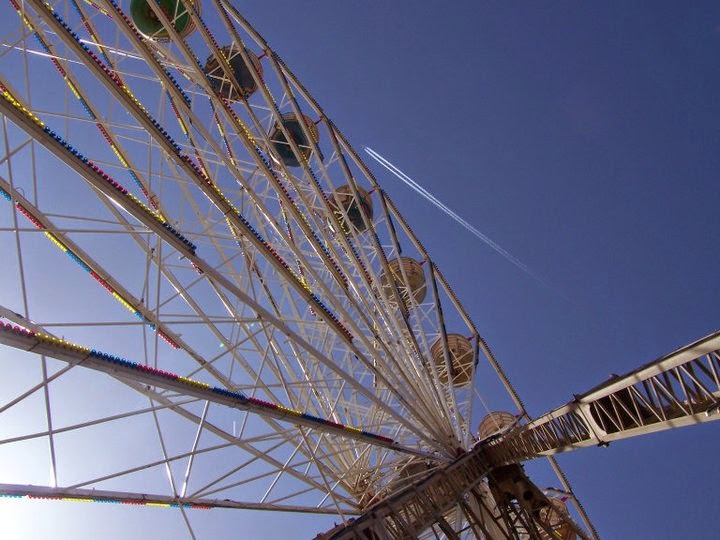 The year that my Nana had to have a wheelchair to visit in order to keep up with our long walks and fun around the park, was the year that I stayed in an apartment separate from my family, with my husband-to-be and our best friend. We bought beer in the bar where The Funhouse used to stand, which was now just really another stall for customers to buy over-priced things they didn't really need.

Sitting in that bar, I could smell the new lacquer on the timber that made up the Viking themed pub beside the massive water-ride, Valhalla, and tried to imagine my younger self in this very same space, some years earlier - slipping on slides, tumbling into ball pits and laughing with my Grandad, who used to take my sister and I here in the evenings for some fun before bedtime.  How things had changed.

My Grandad had died a year earlier and sitting here now, with a view of the old cable cars that we used to ride together (no longer in commission), and the ancient Noah's Ark ride above the main entrance, I thought about all the time I had spent in this park and everything that had come before.

My childhood travelled in flashes in my mind; my sister and I on the Paragliders, waiting for the Derby Racers to begin while listening to faux-organ music chimed out in fairytale-like bars,  chasing my Grandad through the Chinese water maze, laughing at my Nana who had sneaked on the Carousel - all of it not so long ago really, but felt like aeons away...

I thought back to my first ride on the 'new rollercoaster', the Big One, that first adrenaline-fuelled ride.

It was the year our lives had changed.

It was the first year we'd been to Blackpool without my Grandad, who couldn't come due to ill-health.

My lovely, strong, funny, capable Grandad, no longer able to chase us through the park's gardens or accompany us on mini-dodgems was a patient in a mental hospital, destroyed by clinical depression.

My Nana had suffered a stroke, and apart from losing the strength in her left hand side, hadn't the energy, nor the inclination to find fun at the bingo machines any more.  She'd come with us, but that year was particularly strange; we all felt the missing part in our family machine.  She tolerated a day at The Pleasure Beach with us, but once we'd had our fun with the new wristband facility, which took the place of the old ticketed system we had known just a few years before, she was keen to return back to our holiday flat for some rest.

It was a strange time for us all.

The last ride of the day was the best - we'd saved the best and biggest for last.  It was like some kind of baptism of fire.  I'd waited all year for this. 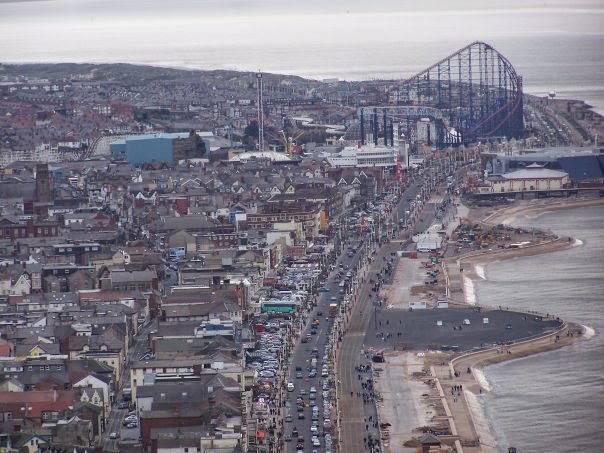 I'd stood against the measuring pole: I was finally - just- big enough.

The queue was huge - an hour I stood, on my own in my wee fleecy jumper in the cold, beside grown men and women who egged each other on in the queue line - winding each other up about how terrifying it was going to be.

They laughed and joked with each other as I stood beside them, nervously waiting my turn in the slow-moving line, watching train after train travel slowly, slowly up the hill and plummet in a screaming thrill of twisty, fast, exciting, nonsense.

As I moved into the rollercoaster station, my time had come.

I stood at the metal gate as the last train emptied it's passengers onto the other side.

They were all laughing as it pulled into the station - one woman was crying, real fear etched on her face.  The folk who disembarked all laughed, chattering with excitement about what they had just been through.

I was shaking at this point.

As the gas brakes released the metal barriers, I pushed forwards, seating myself into the comfy black padded seat of my carriage.

The coaster filled instantaneously - everyone breathing hard and fast as they filled up the seats, pulling the metal bars over laps and clicking the seatbelts, which felt all too little protection for our tiny, fragile human bodies in the face of this demon.  Nobody sat beside me.  I would make this journey alone, this small girl in the teddy-bear fleece, legs barely touching the fully-tightened lap bar.   .

The men in boiler suits, the engineers, moved up and down, checking the lap bars and tugging at seat belts, making sure everyone was safe in that quick and easy throughput.

The small klaxon sounded and the train motioned forward, smooth as you like, straight into the black and white tunnel.

At that moment I gulped - my heart skipped a beat and I realised - here I was, finally living up to what I said I'd do.  I was finally taking the most terrifying ride of my life, my goal, my dream, my nemesis - there was no turning back.

I thought about telling my Grandad about this when I got home - how brave I'd been.  I looked down as we slowly climbed the lift hill.  I waved at my Nana and my Mum and my Sister.  I felt proud, as much as they felt proud - like I was going to the moon, or completing the first rocket launch or claiming my ancestor's land.  They waved back - grinning and shouting.  It was a long climb to the top.  As we got higher and higher, the click-clack-click-clack-click-clack, the guffaws and screams from behind, the feeling of heavy metal bar over my lap and the smell...the comforting, wholesome smell...

Fresh made doughnuts and rollercoaster grease...

The best day of my life. 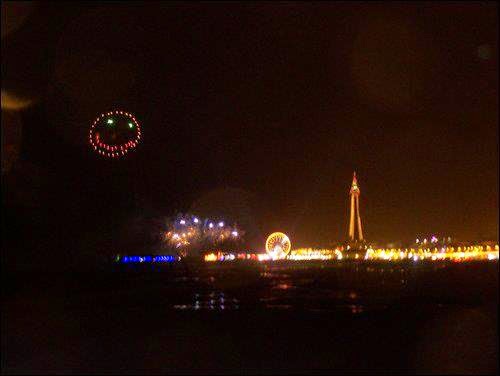