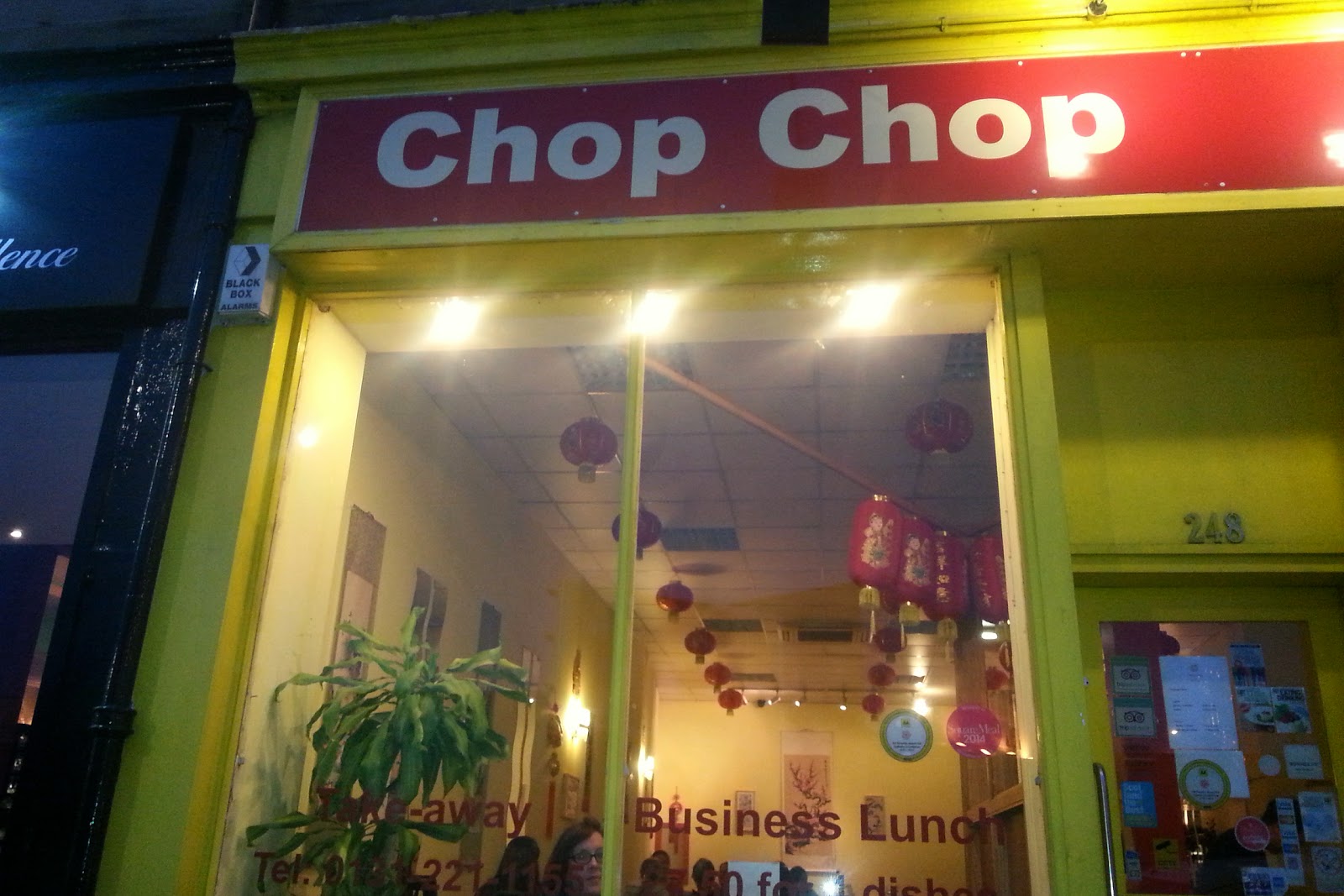 I was dying to see what the fuss was all about.

I was lucky enough to be invited along with the gorgeous Jac from Tinned Tomatoes and the lovely Stuart from Cakeyboi to see why Gordon Ramsay himself had cause to visit in his quest to find Britain's best local restaurant.

I volunteered to drive for the evening, so we all hopped into my ever-reliable Aggie (That's my car.  Yes I named her.  Makes it easier to drive motorways at night if I think we are a team!) and drove from Dundee to the Haymarket restaurant, our stomachs rumbling at the thought of Unlimited Banquets.
Which is a thing on the menu at Chop-Chop by the way. (Are you excited yet?)

Situated across the road from Edinburgh's Haymarket Train Station on Morrison street, we found parking directly outside and moseyed on in, to be given a very warm greeting by the manager, who was extremely friendly, taking the time to make sure we were properly furnished with drinks before explaining the menu for us. 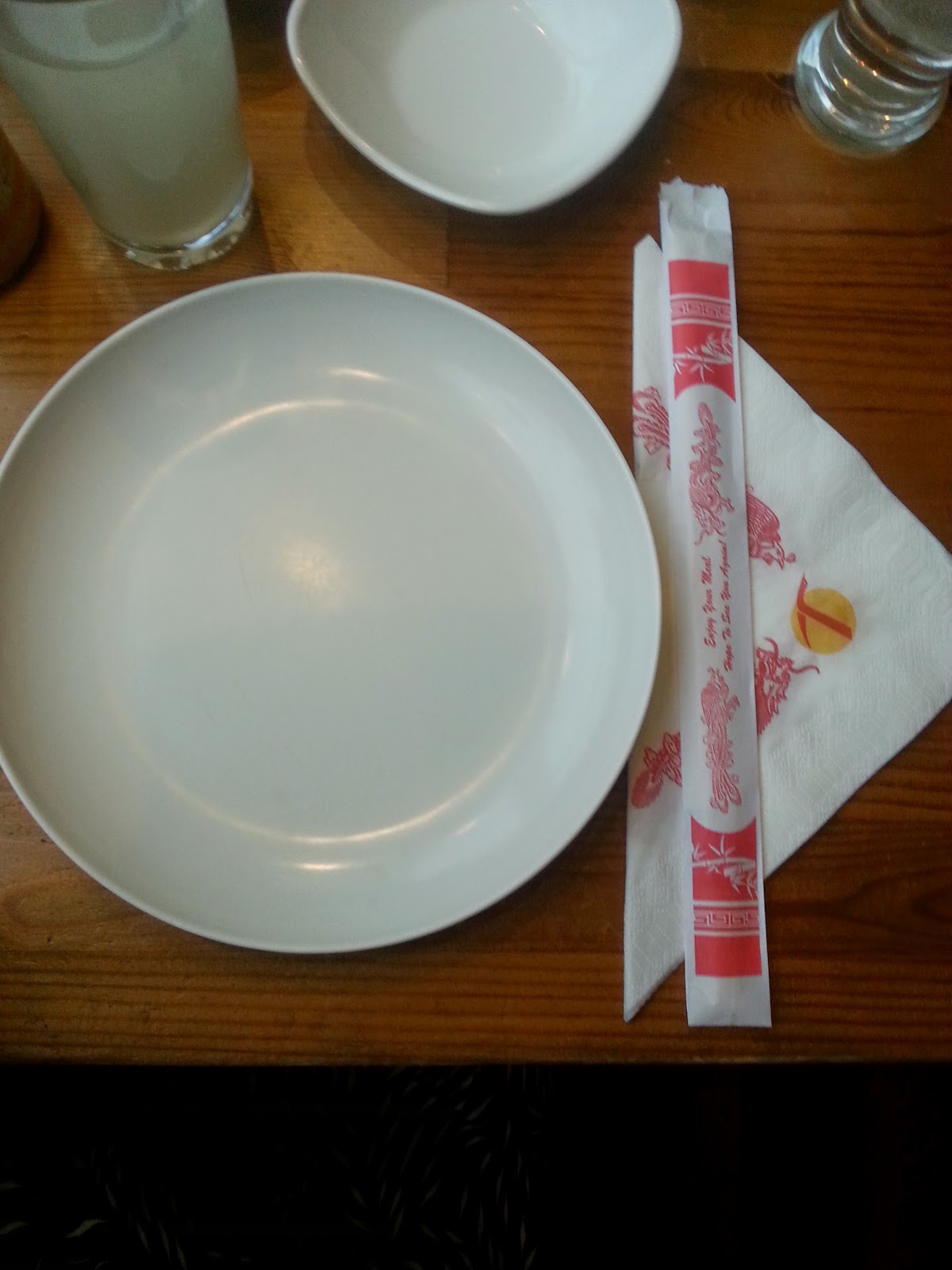 As a fussy vegetarian (I don't like mushrooms, I'm not fond of tomatoes and I really don't like aubergine - I am every restaurant manager's nightmare.  I'm the one who asks for the dishes to be modified.) I was very pleasantly surprised that not only was there a huge and varied vegetarian menu, but we were also not limited to trying just one dish! And there was not a mushroom in sight.  Check out the Vegetarian Menu  for yourself - it offers an amazing choice, and is all very tasty.  I had a hard time trying to pick!  Luckily, the manager helped us out by recommending the Unlimited Banquet, with vegetarian substitutes.

As the menu helpfully explains:

If this is your first visit here, we would like to explain our Chinese style of serving. In China, diners order collectively and share all dishes, which are brought to the table in random order as soon as they are ready. In this way, mixing the textures and flavours of the dishes adds to the enjoyment of the meal.

The plates began to arrive quite quickly.  At first we were presented with some very fresh salads.

First up, the Cucumber Salad, consisting of shredded cucumber Chinese leaves and glass noodles which was fresh and delicious, served in a tangy vinegar and lemony dressing with a  hint of mustard.

Hot on it's heels came the moreish Crispy Shredded Potato.  I cannot at this point iterate how important it is to have a wee practice with your chopsticks before attempting to eat.  I'm not talking a lot of practice or classes or anything, but even just a wee bit before you dive into fine shredded potato.  Because it gets a bit messy and embarrassing if you don't know what you are doing, and yes, we did have a few comedy moments.

But once we got going, there was no stopping us! 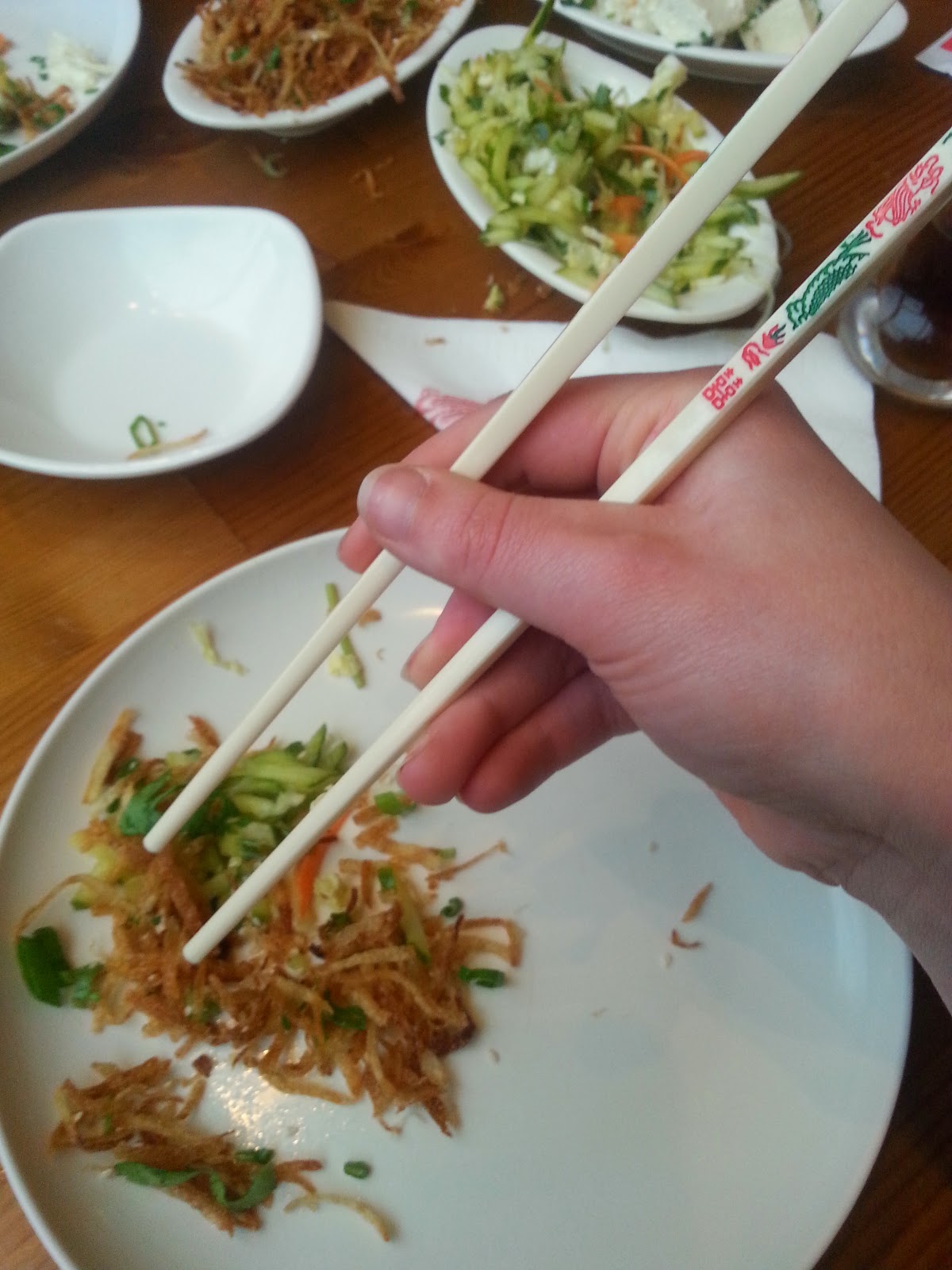 I am very sure that if you preferred a fork and knife by the way, you could ask for some.  Eating with traditional chopsticks definitely added to the overall experience. And I became a bit of a pro by the end!

Mixing our own sauce at the table for the next instalment of our meal - the famous dumplings! - added to the theatre of the occasion; a marvellous touch.  Soon we were mixing vinegar, soy sauce, chilli and garlic in the little dishes provided to dunk those delicious dumplings into.

Jian Wang brought the recipe for her now famous dumplings over to Edinburgh from her home region of Changchun in North Eastern China. Jiao Zi, as they are called in Changchun, became so popular here that Jian built a factory, distributing them to Chinese supermarkets throughout the UK and even on P&O cruise ships.

Chop Chop restaurant was born in 2006 and with the dumplings, as well as other fresh, healthy and authentic ingredients at the fore, became a roaring success. 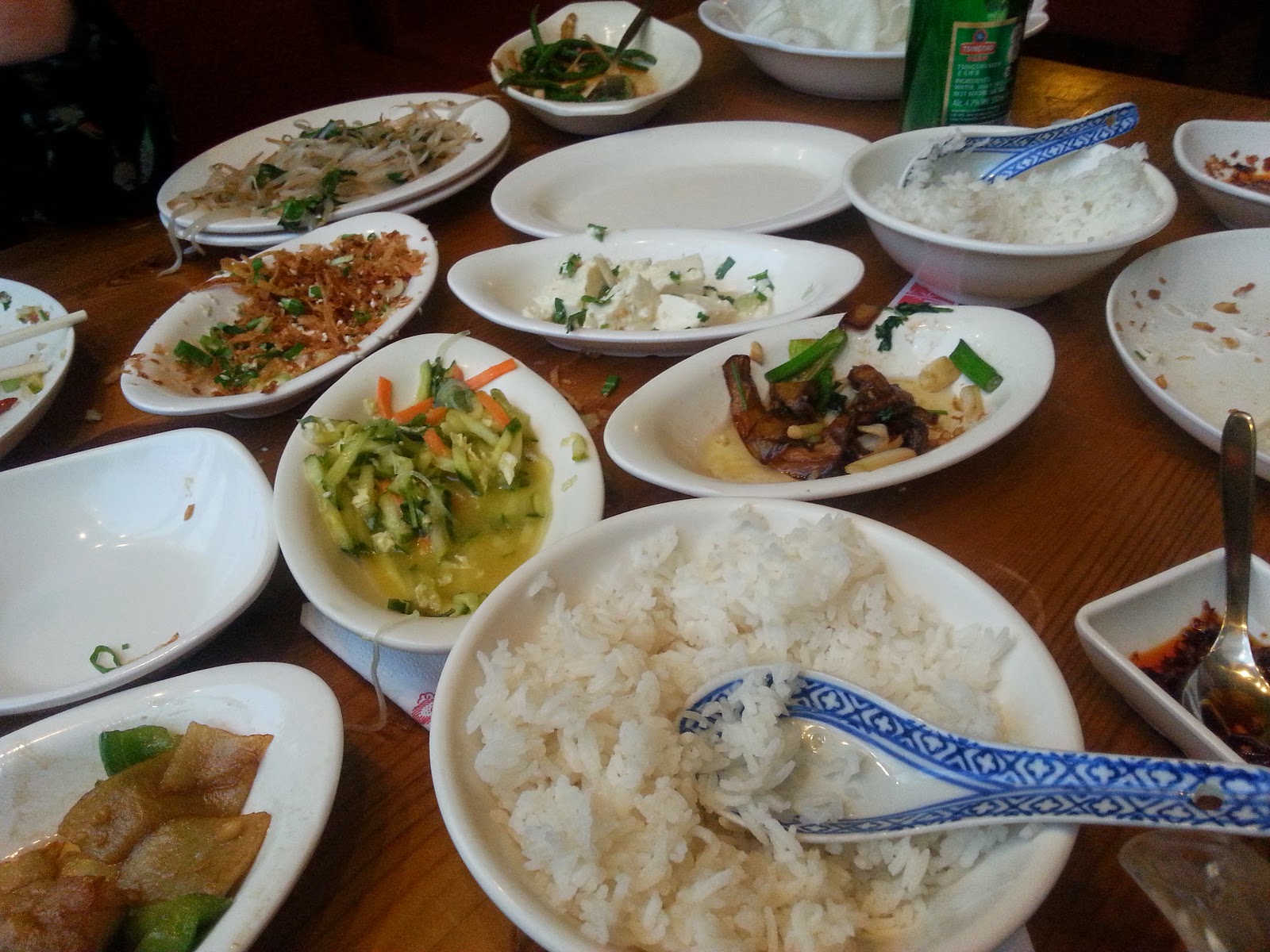 Soon our table was groaning with a vast array of dishes.  The dumplings of course were outstanding.  Clearly made and cooked just before they came to our table, they were full of flavour, and dipped in the sauce they burst into even more life.  They were simply amazing.

I also ate some of the Aubergine, which until now I would never have had - but here I had loads!  Very savoury and fried, it was actually delicious.  I even had seconds.  And thirds!

And the best thing about the Unlimited Banquet?  It was UNLIMITED!

You can re-order any of the dishes at any time, so no need to worry about etiquette when you find a dish you really love - you are free to consume as much of it as you can manage.

But remember to save room for dessert!

When handed the dessert menu, we were pretty stuffed.  But the bar had been set so high in the main course - could the dessert match the standard?

I often find in Chinese restaurants, the dessert falls behind, but in Chop Chop, this was certainly not the case!

Top of my list comes the Baked Mongolia, a dish which took slightly longer to be prepared for us, but was completely worth the wait.  Served as a pastry, the Baked Mongolia is hot, but with melted cold ice-cream which pours out of the middle when cracked open.  The result is a delicious mix of hot and cold sweet - a Chinese version of Baked Alaska.

Stuart was desperate to taste the Sugar String Apple - caramelised apple pieces in a sugar coating.  On arrival, it looked amazing.  Steaming hot, we were told to dip each piece in a ready-made bowl of iced water to crisp up the coating before eating. It did not disappoint! 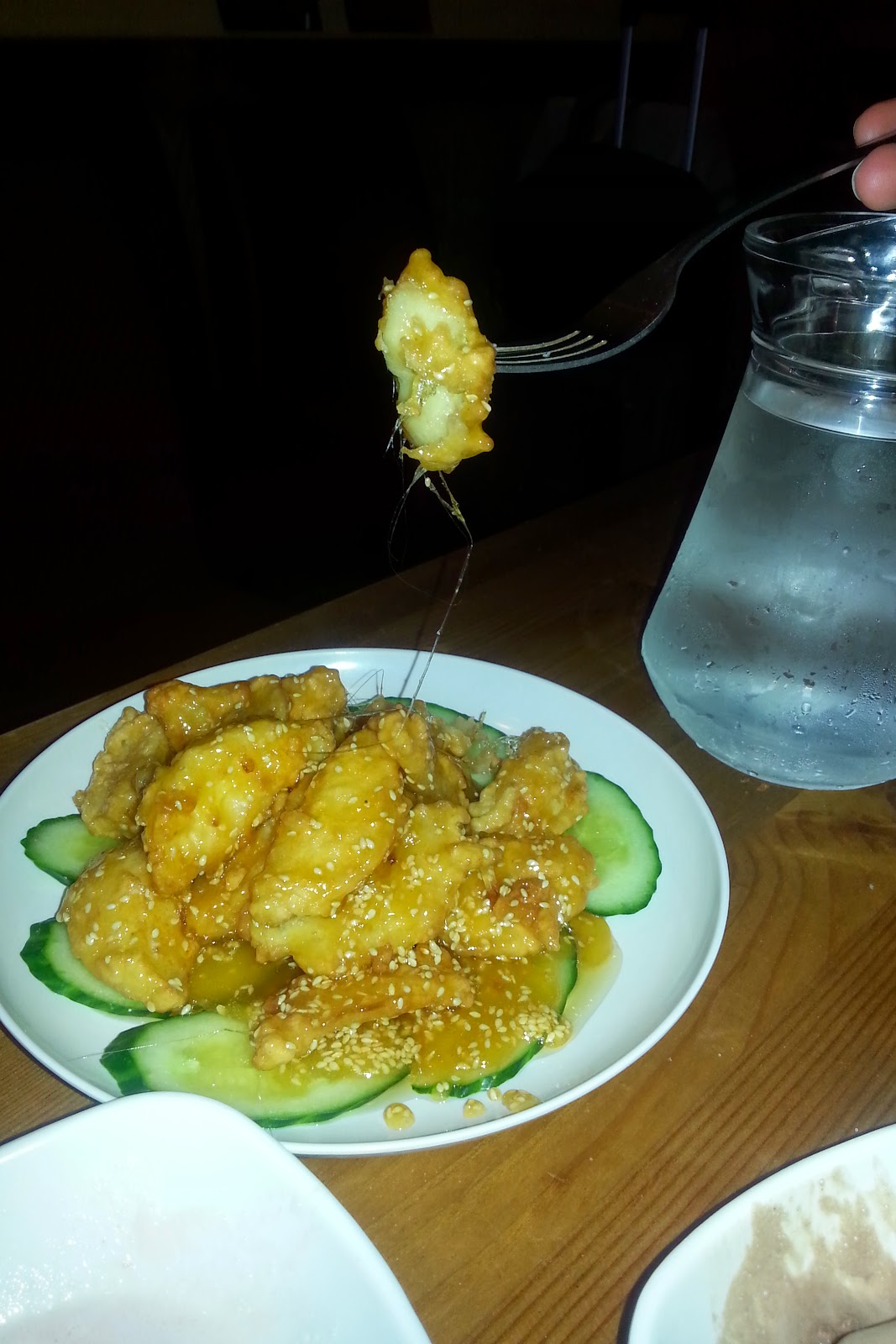 Sweet, but not sickly, the apples were moist and very, very, very tasty.

More dumplings were available for dessert - both Mixed Fruit (which were very fruity and full of flavour) and Peanut ones too.

As we were served with a taste of all the flavours of ice-cream - Mango and Lemon Sorbets as well as real Chocolate, Vanilla and Strawberry ice-creams, we took the opportunity to pair all of our desserts with them.  The ice-cream itself was amazing, and would not have been a disappointment to anyone who ordered.  Real ice-cream with real flavours - no skimping on quality. 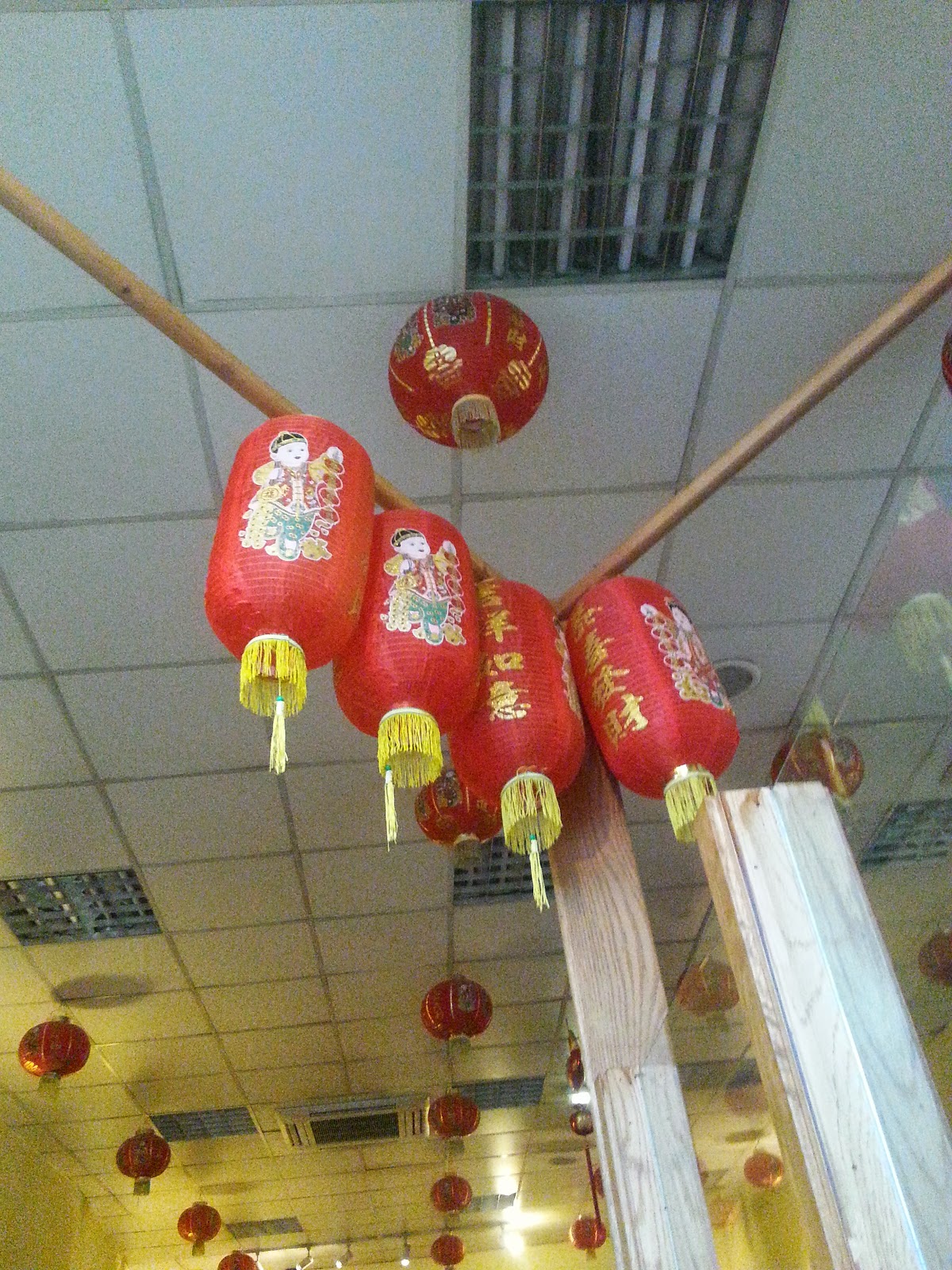 When we eventually managed to fit in our last dumplings it was almost a sad affair.  We gazed fondly at the leftovers, unable to pack another morsel in.  It was a flawless and faultless service with some of the best food I have ever eaten, and I do not say this lightly.

As someone with quite a fine palette I am quite sensitive to greasy, heavy food and very fussy when it comes to taste and even texture, but I cannot fault my experience at Chop Chop.

The food was healthy, well-presented and nothing was too much of an effort.  As someone who has spent a lot of time working in the service industry, I know good service when I see it, and it was certainly prevalent in this restaurant - the staff were attentive and helpful to all of their customers and everything ran smoothly and effortlessly.

We made our farewells and headed for home, very full and very happy.  Even a long drive home in the foggy, misty dark didn't dampen our mood - we all spoke enthusiastically about the food and none of us had a bad word to say.  In fact, we were all waxing lyrical about how we were going to return and bring our partners next time.

I must admit, I did feel bad going without Dave.  And he was very jealous when I returned home and told him of my amazing experience.  I did console him with the fact that I joined the loyalty scheme though. 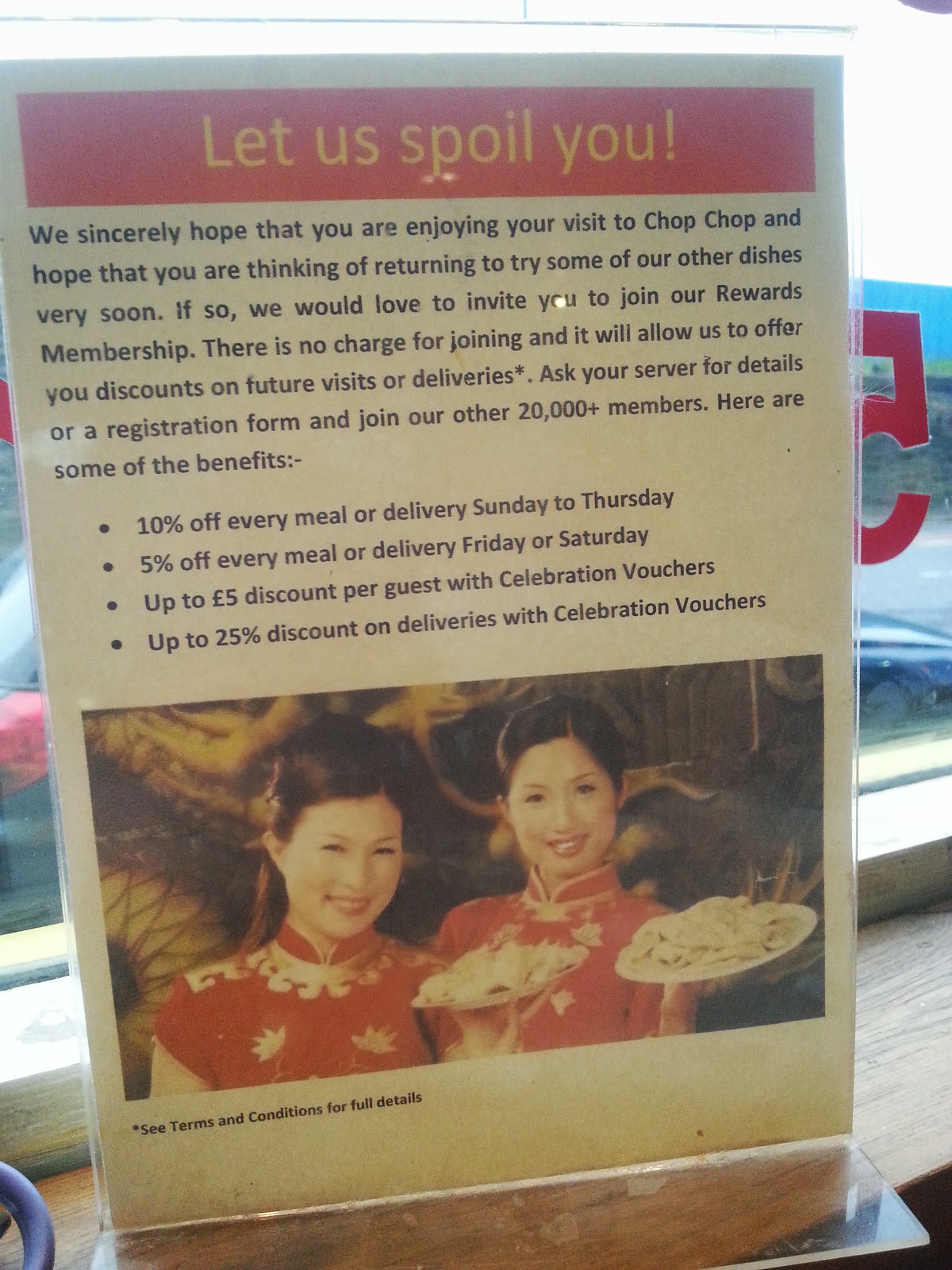 No charge for joining and offering 10% off every meal, Sunday to Thursday, 5% off every meal Friday and Saturday and up to £5 off per guest with the Celebration Vouchers they send you on both you and your partners birthdays AND your anniversary, there's a strong chance we'll be back.  I am seriously looking forward to convincing anyone who'll come with me to return.


*Disclaimer - I was asked to review Chop Chop.  In return I was given a free meal at the restaurant. All of my views are my own and I remain honest about my experiences.