The Time My Husband Spewed In My Face 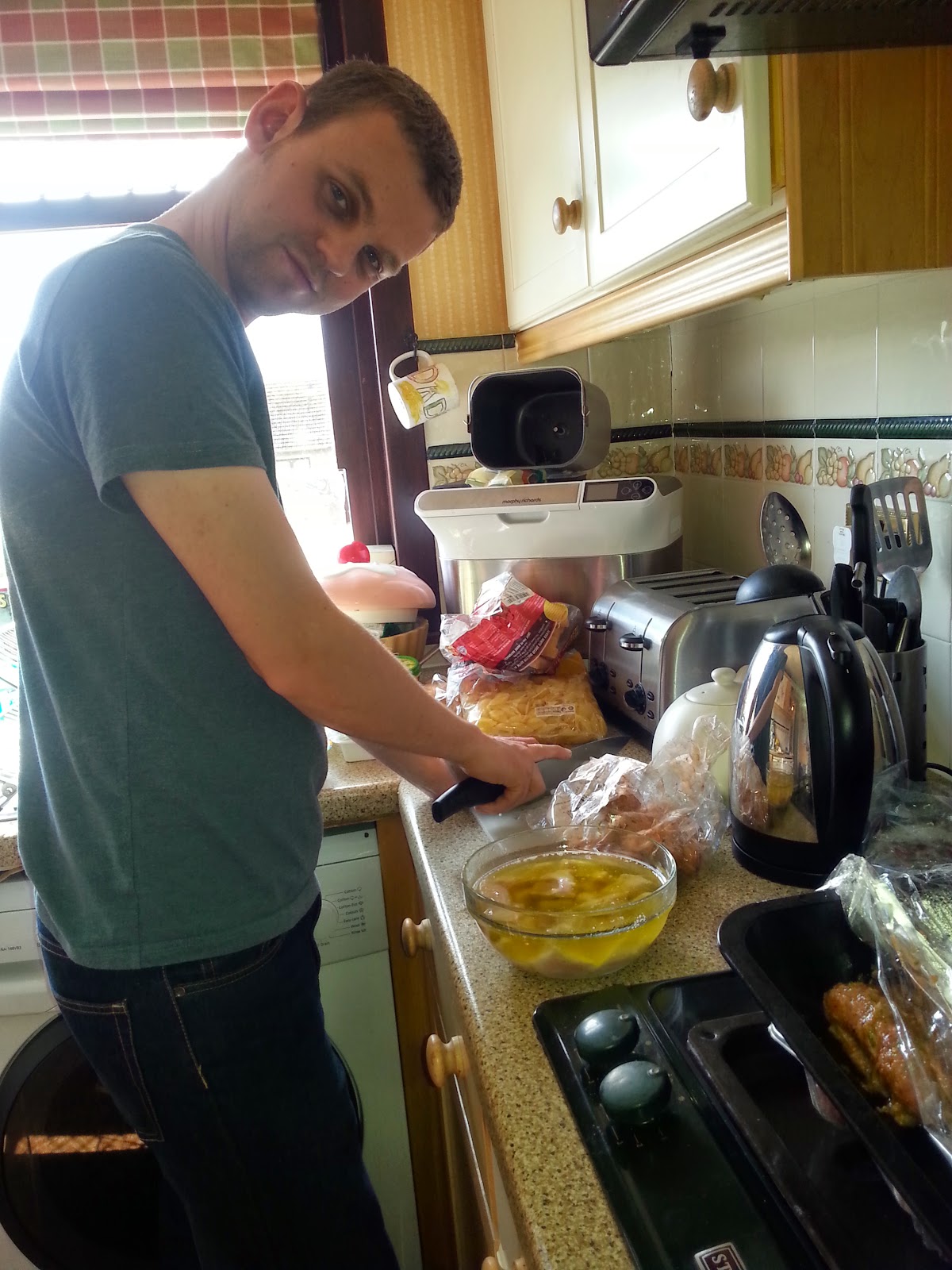 This is Dave.  Dave is lovely guy.  We have been together for a long time and are very happy together.

You would think that Dave was a nice, quiet, unassuming bloke, and in the main, I would say, you'd be right. 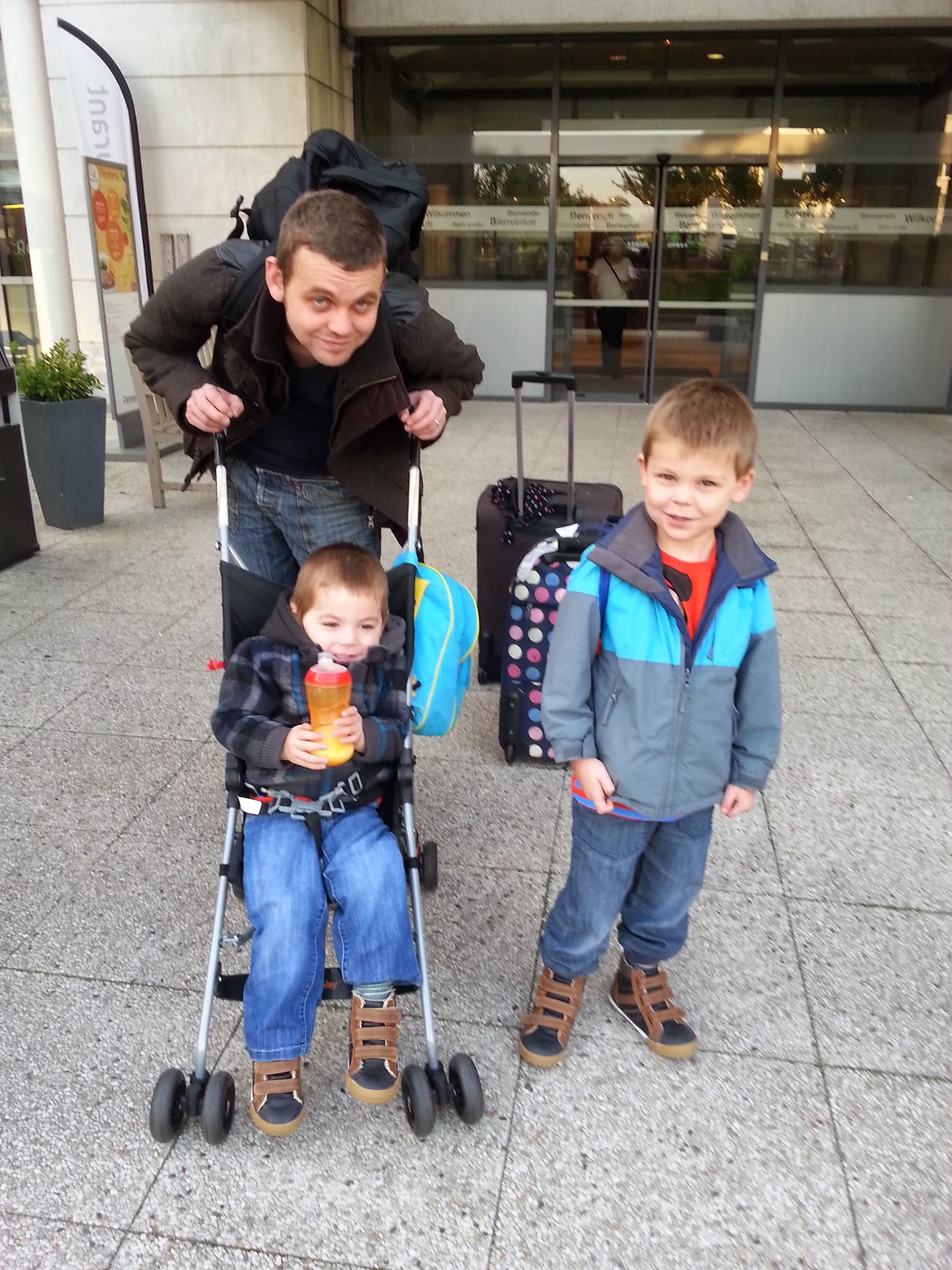 He's a great dad, a loving husband and a generally all-round amazing guy.  He works hard, supports me in everything I do, is really clever and funny and is a genuine, stand-up dude.

But this one time, while horrifically drunk, Mr. David James Millar spewed in my face.

And (quite rightly, I feel) I will never let him forget it.

You know how in hindsight, things can become funny after they've happened, even if they weren't at the time?

This isn't one of those times. 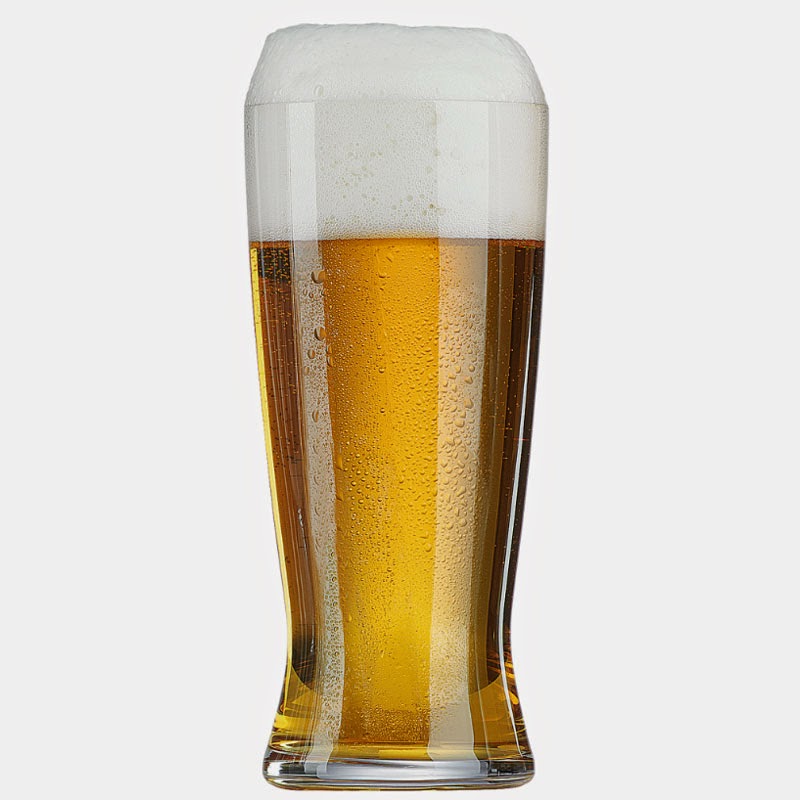 This is beer.  Beer can either be Dave's best friend or his nemesis, depending on a number of factors. 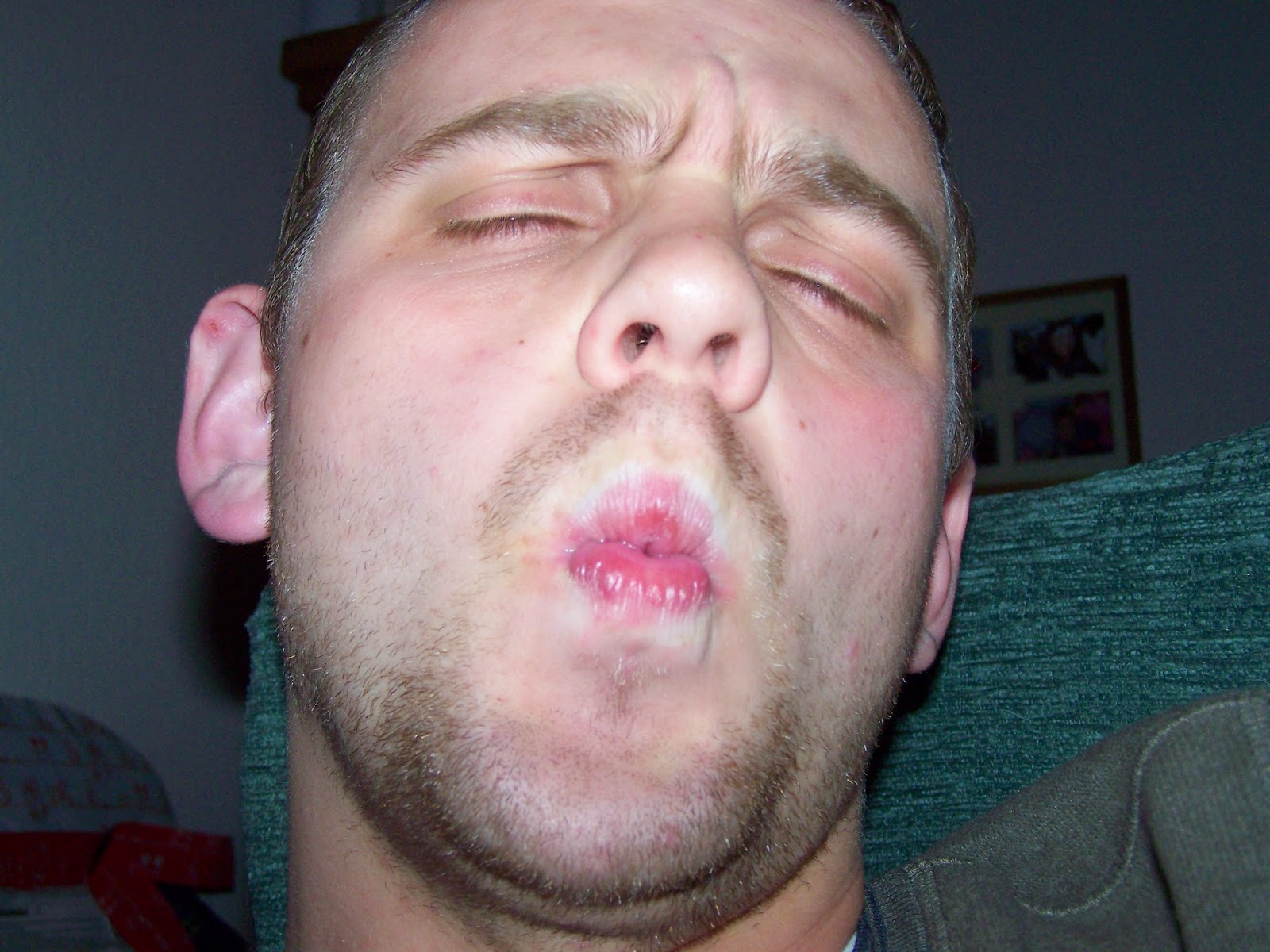 I WISH I had a picture from the night in question - it was worse than this one.  This is relatively sober.

We used to live in a student flat which we shared with our best friends.  It was a great time, and hence we spent a lot of our free time socialising together.

What a beautiful year.  There were parties, birthdays, many long nights spent huddled together on the sofa under blankets playing Tiger Woods PGA Golf 2005 on the PS2 because we had no heating (in the winter it was warmer outside than it was inside).  These were the days of our lives.

How I dream of re-living them.

I forget the reason why we were out that fateful night.  We were students - any reason is a good reason, really.  Maybe it was cheap Tuesday. Perhaps it was Student Union karaoke.  Either way, we dressed up and headed out for a night on the town.

It all started off quite well - a trip to the Union for some shots on the pool tables and a go on Time Crisis 2 at the video games arcade.  The someone decided that they felt in need of a decent pub quiz, so we headed out to a local bar to get a decent seat before the quiz started.

Now, the important thing to remember here is that it was early.

It wasn't a whisker past 9p.m when Dave headed to that bar to begin before we joined him and a buddy after I'd gone to the cash machine.

What I didn't know, is that when he got to the bar, Dave had ordered a new, very strong lager beer, and had had not one, but two, in quick succession before we'd managed to amble along to join him before the quiz started. 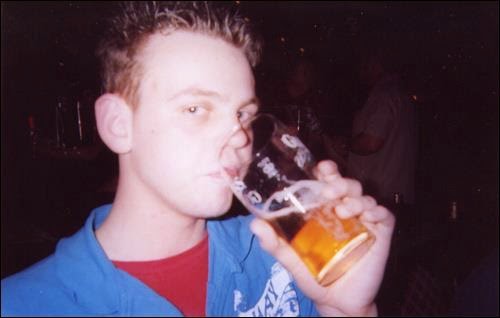 What I did know is, that by the time we arrived, the boy could barely speak, let alone play a serious pub quiz.

This wan't your average pub quiz either - oh no - this was a highly intelligent, quite high-brow pub quiz, where the tie-breaker wasn't a shot of vodka, or a show of dancing skills, but a game of Jenga.

I knew we were screwed.

Initially it was funny.  Dave was a bit drunker than we'd seen him, but he was tolerating our slagging of him quite well.  Once we'd worked out the source of his drunken bum-ness, we all laughed about it - he hadn't realised himself that he'd just drunk two 8.5% beers within the space of half an hour.
to him.  The quiz became intolerably embarrassing as he started not only to shout out the answers to the questions in an otherwise silent bar, he started to slag off the compere by slating his dress code.

As the alcohol began to take a stronger hold however, the beast turned.  Suddenly he was no longer laughing - he grew offended by our laughter and decided we were all being horrible

After we'd all 'shushed' him and harangued him, he decided enough was enough - he was going to the toilet.

After he left to go down a spiral staircase to the toilets (a moment in which I actually feared for his life - he could barely see), my friends turned to me

'Oh god - I think he needs to go home'
'He's really pissed isn't he?'
'I can't believe what he said about the guy's trousers!'

As I was slowly absorbing the fact that as his girlfriend, I was responsible for getting him home and making sure he didn't cause any more offence, our buddy, who had followed Dave to the toilets in case of accident, reported back.

'He's just been sick on the stairs'

Apologising to my friends and promising to see them back at the flat, I huckled Dave out (with not much fight - he was trying to go to sleep on the table by this point) to cries of 'are you sure you are going to manage?' and 'are you gonna be o.k?'

To which I just nodded and walked even faster - the last thing I needed was an audience.

Grabbing a taxi, we jumped in for the short ride home, with me freaking out the whole way that it was going to cost me £50 clean up charge for spew - Dave kept complaining he didn't feel well.

On the way I watched out of the window as others were beginning their nights out in short shorts and t-shirts with made-up hair and red lipstick; while I sat in the back of this cab with a drunken boyfriend draped across my knee and a silent and quite angry taxi-driver watching on for a short and potentially messy fare which would be more trouble than it's worth.

Thankfully we made it back, no mess involved.

I took him straight up to bed, undressing him to boxer shorts and carefully placing a glass of water beside him.  Closing the curtains, I realised I was knackered and decided to go to bed too.  The night was over.  I took off my make-up, got into my jammies and decided to call it a night.  The dog gave me a reassuring look of sympathy before he curled up between Dave's legs at the end of the bed.  Dave casually patted him and slurred, 'That's right Sparky, get between my legs...it's the best way...' before quite literally falling into a deep alcohol-induced sleep.

I mused about how payback would come in the form of an epic hangover and grinned to myself.  What a daftie.

I must have been asleep for a few hours before I was woken to the world's worst noise.

Petrified, I leapt out of bed, instinctively landing beside the lightswitch.

Flicking it on, there was nothing that could have prepared me for what I was about to see.

There he was. Naked.  Covered in his own vomit, sat up, looking at me in surprise.

'What the hell happened?'

I could barely comprehend the scene.  The dog was at my feet tail between his legs, frantically trying to barge past me and out of the door.  I opened the door and he ran out and down the stairs.

I looked back at Dave.  He started mumbling and stuttering,

'Okay...so I think you need to go in the shower'

'No!  No!  Sorry!  It's fine, I don't want to bother you, I'll just sleep here' he said, rolling back into a puddle of sick.  The smell was acidy and cloying.

As he lurched backwards to make himself comfortable in his own vomit, I barely concealed my disgust.

By now I could hear that our flatmates were back and had probably heard the whole thing.

Angry and quite annoyed at my mess of a boyfriend, I went through to the bathroom and turned the shower on.  Going back into the bedroom, fire in my belly, I threw back the covers.

Like a petulant teenager, he grumpily threw himself to the floor and stood up.  I started to pull the soaked sheets from the bed.  He made his way to the shower, dropping his boxers on the bathroom floor.  Gathering the sheets, I went to pick up the manky underwear to rinse them in the shower before I took them downstairs to the washing machine.

'I have  to change the bed.  It's covered in spew you daft bugger!  Also, I'm going to have to wash the wall'

This is where he pulled out the puppy-dog eyes.

So, I agreed.  I agreed, no-one would know.  After all, this had never happened before and it was a bit of a shame - he hadn't meant to get so wasted.

I gathered the sheets, went downstairs and shoved them into the machine to be washed.  As I did so, my flatmates approached me from behind.

'Mmmhmm?' (me concentrating on what wash cycle would get beer-vom out of white sheets)

'Gen, what's the dog covered in?  Is he okay?  He seems quite scared?'

I turned around.  there, trembling in the corner was my lovely, fluffy, white and now orange, soggy dog - trembling and whining.

Turning to face them, a shudder of horror ran through my body and into the pit of my stomach.  There was sick in my hair.  And my eyebrows.  And on my face.  My hands were covered.  And my arms.  In fact, I was caked.  I was so thrown by the whole situation I'd failed to notice the mess I was in.  My flatmates recoiled in disgust and had a few belly-laughs when I regaled the whole tale.

Grabbing the poor dog and trying to comfort him, I marched straight upstairs. I undressed, put the dog in the tub and the two of us joined Dave in the shower, sitting next to him in his morose sick-filled bath.

Wiping orange mush out of my eyebrows I just nodded.

*Disclaimer:  Dave knew I was writing this.  He thinks it's hilarious.  We got married and had kids and I can still kind of maybe sometimes laugh about it, kind of.  Hmm. I would say that this was a one-off incident as far as his silly drunken sick-filled adventures go, but sadly this is not the case.  We've had a similar incident involving him trying to sleep in the bathroom and end up spewing in a basket of clean washing. And along some walls. And out of a window. Oh and there was the time recently when he went out with his brothers and ended up doing some stuff I can't mention here. This was a poorly thought out plan - he does not need egging on by younger guys who like to drink shots.  He still can't handle liquor.  It's okay - I have now learned that you just don't share a bed with him in such circumstances.  The dog is fine too.  He's 18 years old now, and still sleeps at the end of our bed, so is not traumatised in any way. 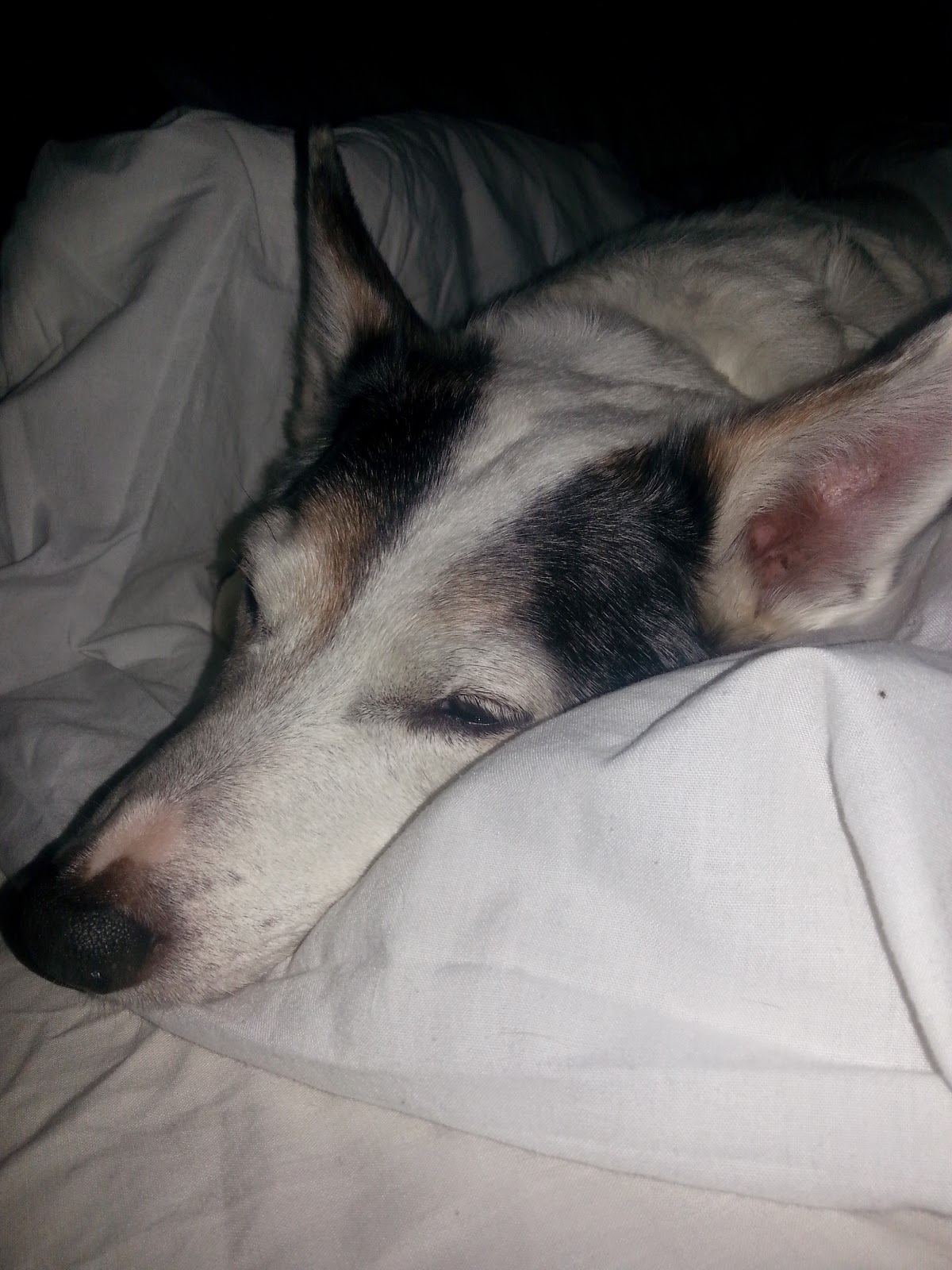