Last night was a bit of a grown-up night.  I had a seriously great time with some seriously great people.  In a seriously classy and grown-up location. Not a ball pool, screaming child or yoghurt stain in sight (well, except on Dave's trousers - the kids asked for yoghurt before we left the house!)

This is the Tay Hotel as it has been ever since I can remember - a huge, landmark building in the middle of our City, derelict and full of mystery.

I love old buildings and am a huge fan of Urban Exploration sites like 28DaysLater.

I was always disappointed to see that nobody had attempted to enter this building for a bit of urban exploration.  It's like anything forbidden - you are just dying to see inside!


Since it's decline in the 1980's, this huge hotel has been boarded up and ravaged by time, hidden from the world.  Sitting in a prominent position in one of Dundee in one of it's busiest thoroughfares it was more than a bit of an eyesore.  Thus, it was great news when Malmaison put in a bid for the property way back in 2011, in line with plans for a whole of Dundee Waterfront redevelopment by the council, who are going for a thoroughly different view from across the bridge.

Just look at it now!
Malmaison has transformed the formerly derelict Tay Hotel into a grand, modern interpretation of classy chic in the heart of the city.

Dave and I were delighted to be invited to dine there for a very good friend's 30th birthday celebration. A great chance to dress up and finally get a nosey at what's inside!

Mather's Temperence Hotel was built in 1899, during the Victorian era of alcohol prohibition and was a big pull for dock workers and travellers arriving from the neighbouring railway station.

Featuring some original Victorian iron-work inside on the staircase, as well as some stunning masonry and period features and a stunning domed roof, the new, swish and very fancy Malmaison is a true boutique hotel, offering some gorgeous surroundings in which to relax and enjoy.

When Dave and I arrived, everyone else was already seated (thanks kids for dragging out the long goodbyes) and we opened the glass doors, pausing at the foot of the stairs.

This being our first visit to the hotel, we were initially stumped as to where to go - but soon deduced that the only way was up (baby).

At the top of the stairs, the maitre'd was waiting to show us into the Brasserie, which was furnished with the most expensive-looking, flocked, mini-chesterfield chairs I have ever seen!  A living-flame fire was ensconced in the centre of the room, with faux-wooden panel wallpaper on the walls. A bespoke leather corner sofa was installed at the bay window, which looked out over the site of the new waterfront development; that's gonna be a helluva view when they're finished! 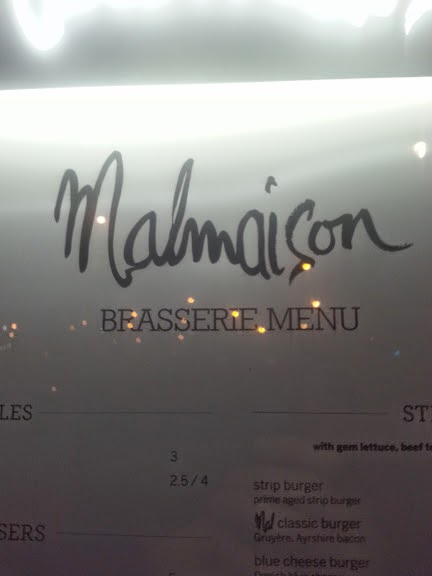 We finally go seated beside our lovely friends, and were immediately served a glass of filtered tap water and handed a menu.

It was so lovely to be out with our friends.  Old friends are the best friends, and although we don't see each other very often due to distance and circumstance, we all just gelled.  It was such a nice, relaxed and comfortable evening in lovely surroundings, where we all caught up and relaxed into it, with the nice addition of birthday cake!

Our meals were lovely - I ordered the Pan Pasta (which came served in an actual pan!)


A plain pasta, with a kick of red chilli and basil,topped with mozarella balls, it was very filling.  I couldn't finish it all.  Dave had Porcini Mushroom Risotto, which he said was very nice too, although perhaps a touch salty.  He ate it all though!

Desserts were amazing - I opted for Chocolate Souffle with vanilla ice-cream which was perfect; well-risen and nice and gooey and hot in the middle. Dave went for the Sticky Toffee Pudding, which was moist and served with a scoop of vanilla ice-cream too.

The service was very good throughout, with ninja-like waiters, who filled your water-glass, sometimes without you even noticing, even bringing out tinfoil so we could wrap up bits of the cool Totoro cake Heather had baked for Isa.
It was such a lovely evening overall.  And I finally feel like a grown-up after all this time! Kind of.
Maybe my 30th year will finally be the year I stop being daft?

It was just one evening though - don't get too excited.  Dave still can't pose like a grown-up for a photo!