Welcome to Day 2 of our trip to Edinburgh.  It was a jam-packed day, that's for sure!

For info on how utterly unorganised and stressed we were before we took this trip, and our Day 1 shenanigans, click here.

I will iterate again - plan ahead!  Paying £48 for zoo tickets and then not being able to see any animals because they are hiding from the rain - as you should be - is not the best way to spend a day!  We should have checked the forecast at least!

After waking up in our lovely apartments, we packed a picnic, made sure we had our tickets for the zoo and headed out to catch a bus.

Disaster struck, however, when we realised that from the short walk  from our apartments to Princess Street, Ethan's thin coat wasn't up to the job, and he was pretty much soaked through.

We headed to the nearest department store we could find and prayed for sales!

So much for Edinburgh on a budget!
Thankfully, BHS had a big sale on, and we managed to get two very well padded and waterproof coats for under £10.  It seemed as though our luck was changing. 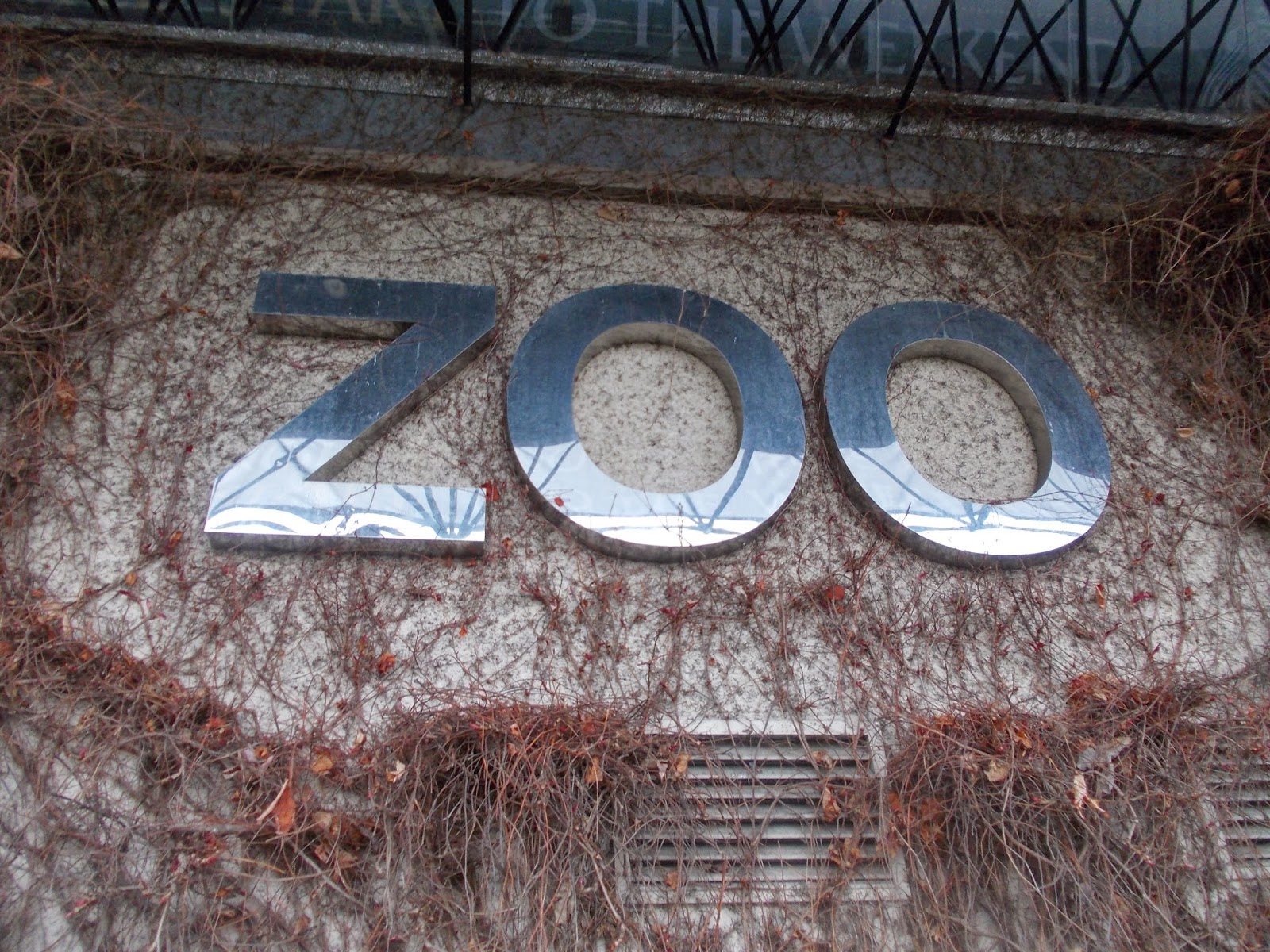 We jumped on a bus and went to the zoo.  We were very lucky - because Edinburgh was so close, Tom and Ethan's Uncle and Auntie and gorgeous wee cousin came to join us for our day out.

We all met in the foyer and had a wee moan about the rain, and then Dave and his brother decided they would get more rain-ready, which involved the purchase of umbrellas, and in Dave's case a super-cute poncho.  Which he rocked for about...ooo...five minutes before he plumped for a brolly.


After everyone got waterproof (ish), we headed out into the zoo to meet our fate.  Our Panda visit wasn't booked until 2.30p.m, so we had lot of time to kill!  And with a picnic in our bags (which we foolishly let the kids know was there) it wasn't long until we'd had enough of staring into animal-less enclosures and headed into a cafe to grab a bite to eat. 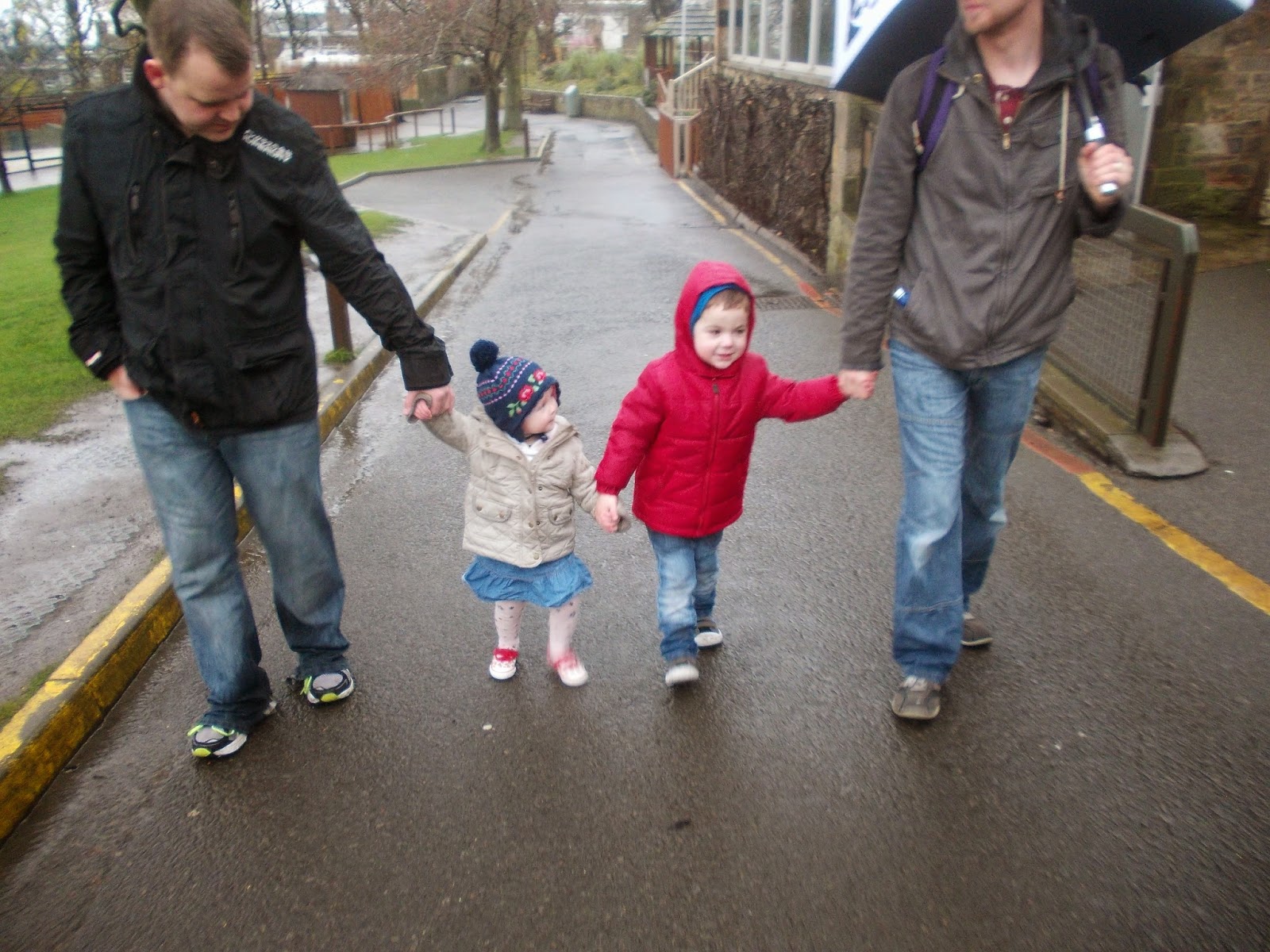 By this time we were all freezing and soaked, so it was a welcome relief to head into somewhere warm.  Unfortunately we hit the cafe at a time when packed lunches aren't permitted, so our picninc packing proved futile, as we were obligated to order some cafe food.

Four bowls of chips hides a sandwich pack quite well though.  Or at least cancels them out a bit.  It pays to be sneaky with your sarnies!

Once everyone had re-fueled, we carried on our way and had a mosey around the Jaguar, Sea Eagles and Koala Bears before making our way up to the top of the zoo.
Usually the zoo runs a rather handy train service up to the top of the hill, which is much better for small feet and buggies, but for some reason it wasn't running until later on in the month(the poster describing why had blurred in the rain).
It wasn't such bad weather for the birds, and the penguins didn't mind the cold and wet one bit.  All of the animals are in full-swing breeding season right now too, so a lot of them were very busy building nests and courting mates.

Some of the younger penguins were too young to build nests and have partners yet, and were very inquisitive!  Only three made it out for the penguin parade.

I love the parade, and although it was a rather dreich day, there was still a sizeable crowd for it. 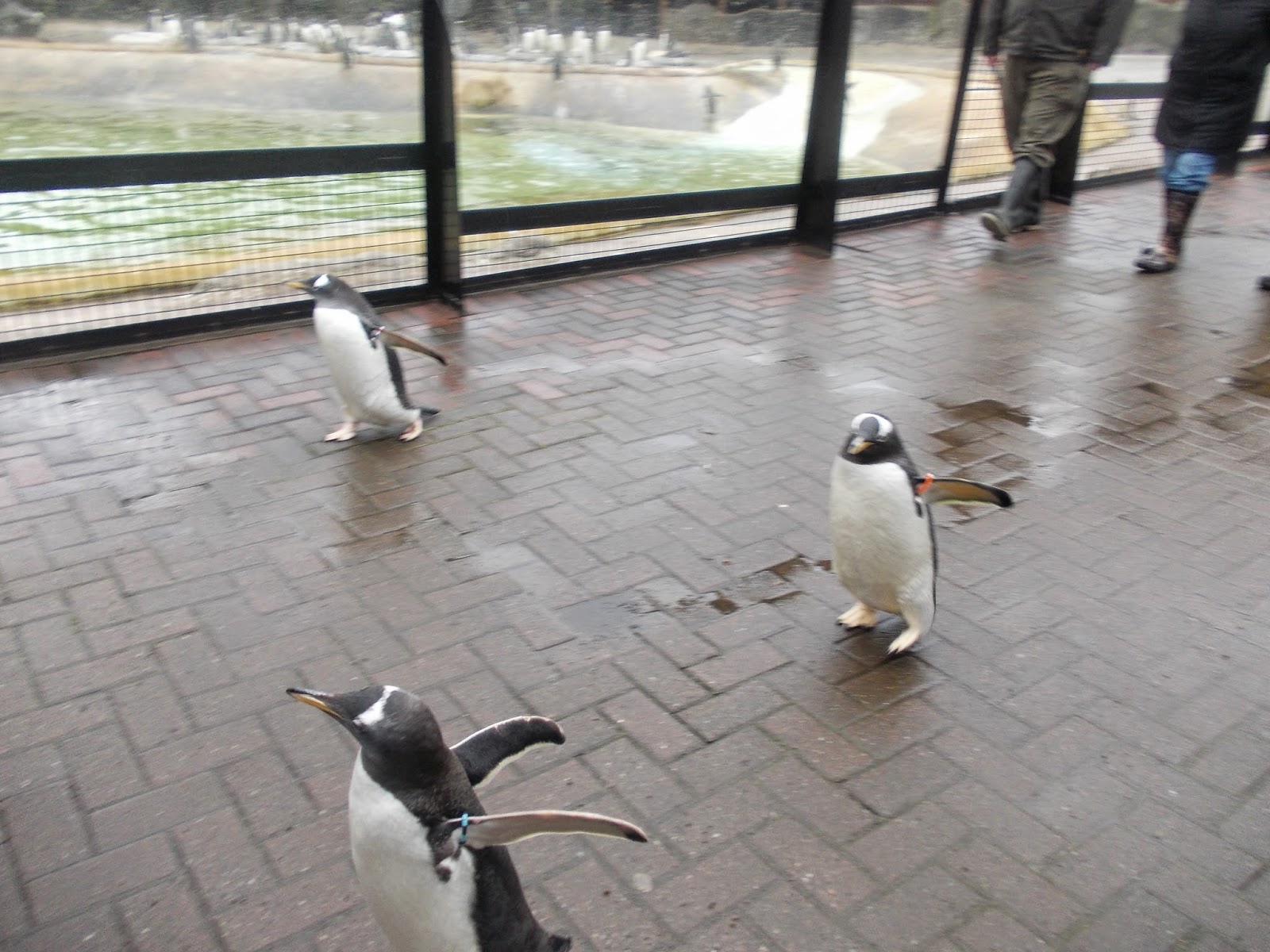 There was a huge build up to it though, and at the end Thomas slightly missed the point.  I swear he doesn't look at things properly sometimes.  After they had passed us and we all started to move again, Tom leaned to me and said 'when's the parade starting?' *face-palm*

We eventually got to our slot for some Panda time, and, like most of the other animals, were sensibly curled up, fast asleep.  The male Panda was hilarious - flat out on his back!


I heard on the radio today that the zoo are expecting the Pandas to mate anytime in the next 7-14 days. Apparently all that sleeping and eating is due to the start of mating season and plays a key part in the process! Fingers crossed for them this year.

We were freezing and soaked again, so a welcome visit to the cosy monkey house was in order.  The monkeys were by far the best part of the day - well apart from a Gibbon trying to attack Dave through the glass.  We all got a huge fright when the huge monkey lunged forward - his teeth were massive and he was really quite scary! I think poor Ethan will be having nightmares about it for a while - he keeps muttering 'daddy monkey very scary' whenever we talk about the monkeys!

Another monkey-based highlight was when we visited the Gorilla House.  It's a massive enclosure with different kinds of rooms for the Gorillas, which they are free to move between.  They too are going through breeding season and are very aggressive towards visitors at the moment. They kept battering the walls and threatening everyone.  I can't say I blame them - it must be pretty annoying having intruders at such a delicate time! 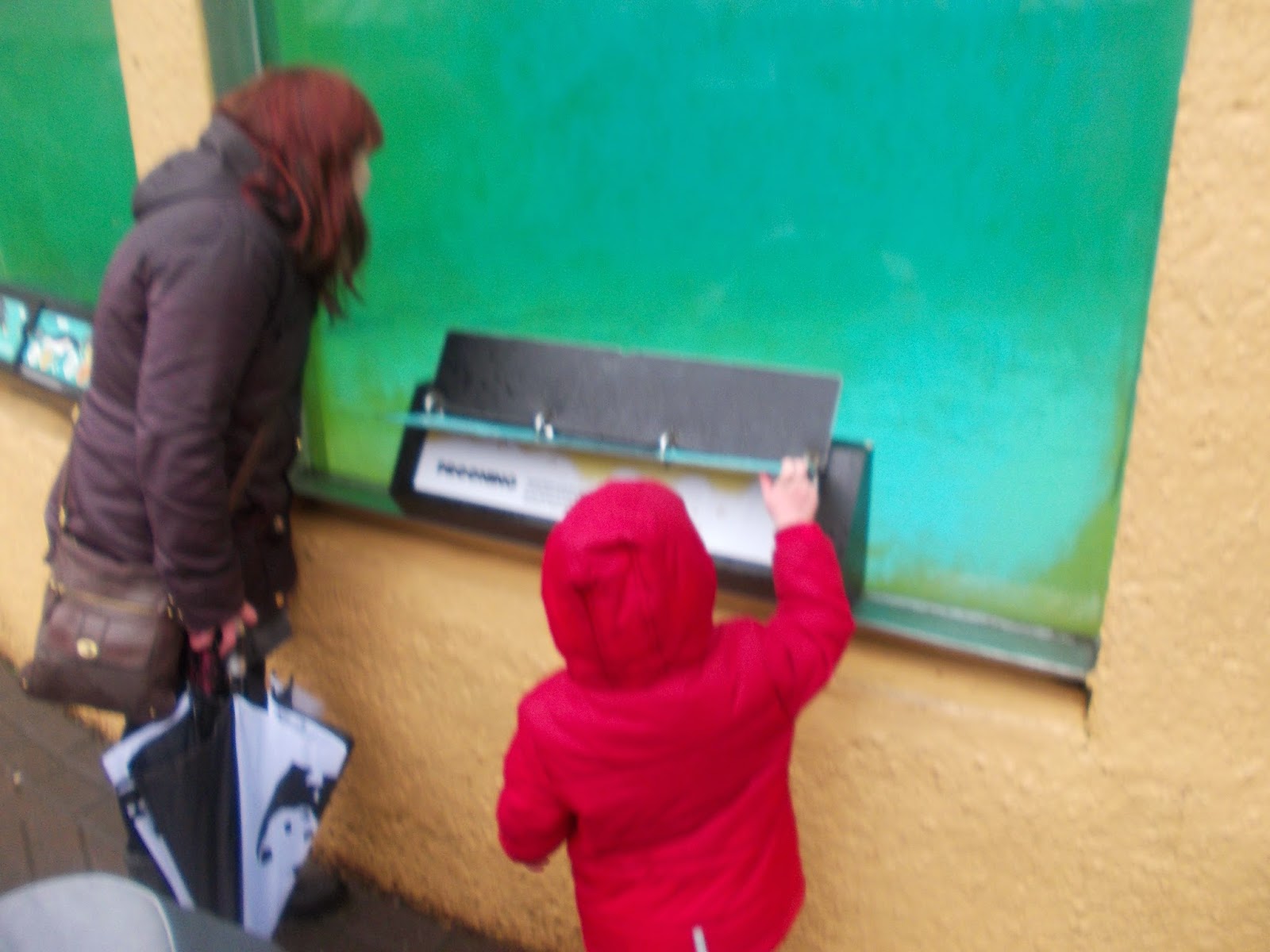 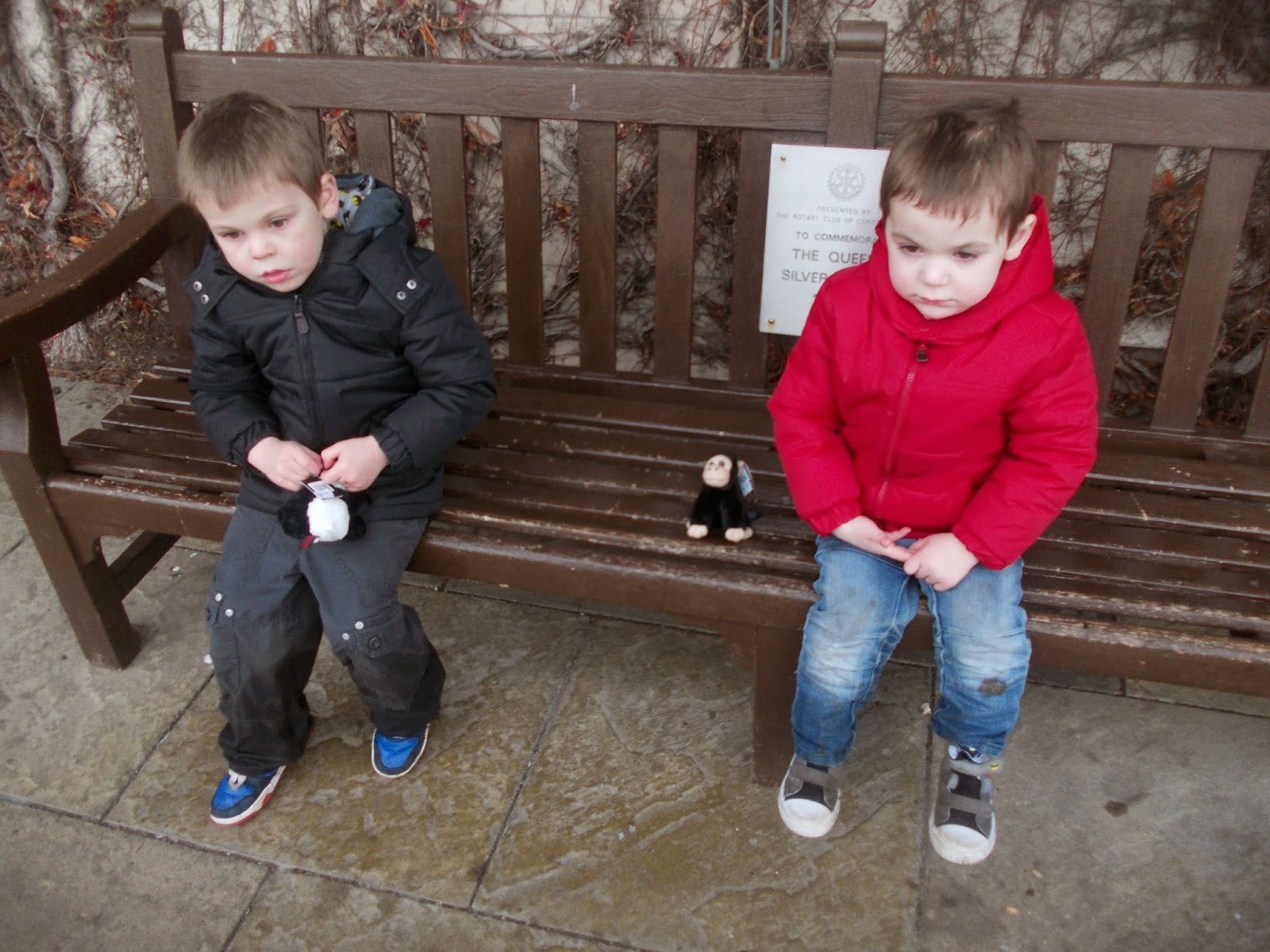 Once we had made sure we had seen everything that we could (got to get your money's worth!) we said our goodbyes to the others and headed back to the city centre on the bus, where we met some lovely friends who live close to Edinburgh for a take-away meal back at the apartments, followed by a cheeky beer.  Despite the weather, we'd had a lovely day at the zoo with our family, and we did laugh a lot!  We'll definitely be checking the forecast next time though and dressing appropriately!

Even though the kids were knackered and really could have done with just going to bed after such a long day trailing around in the wet and the cold, they were really keen to go out to Saint Andrew's Square to catch one of the exhibits for the Science Festival, Field of Light.
I'll give it to them - in the sunshine it did look as though it would be a spectacular display on a nice dry night, but our luck just wasn't it.  However, we satisfied their curiosity and had a walk around before heading back to the apartments to tuck them in for the night.

The next day we headed to the train station, sorry our little trip was over, but kind of glad to be going home.

Edinburgh is a fab place - full of so much culture and lots to see and do.  Next time I would certainly plan ahead much better.  I should have planned a tighter budget and tried to adhere to it - we spent way more than we wanted to, despite some general forward planning and taking picnics when we could.  If we'd planned ahead better we might not have been caught out so much.

Also, the next day, despite planning to get the train at 11a.m, we arrived only to discover that the privatization of railways means that if you buy a ticket online, you are at the mercy of the carrier and their timetable; the train we went to get wasn't an East Coast train (which was on our tickets), so we then had to wait until 2.30p.m for the next East Coast Train!  We didn't choose this, nor did we realise.  And the end result was trying to entertain two small children in a very small, very quiet public library for nearly two hours!  With lots of extra walking with all of our bags!

Every day is an adventure - and it always helps to have a sense of humour, which luckily, we do! :) 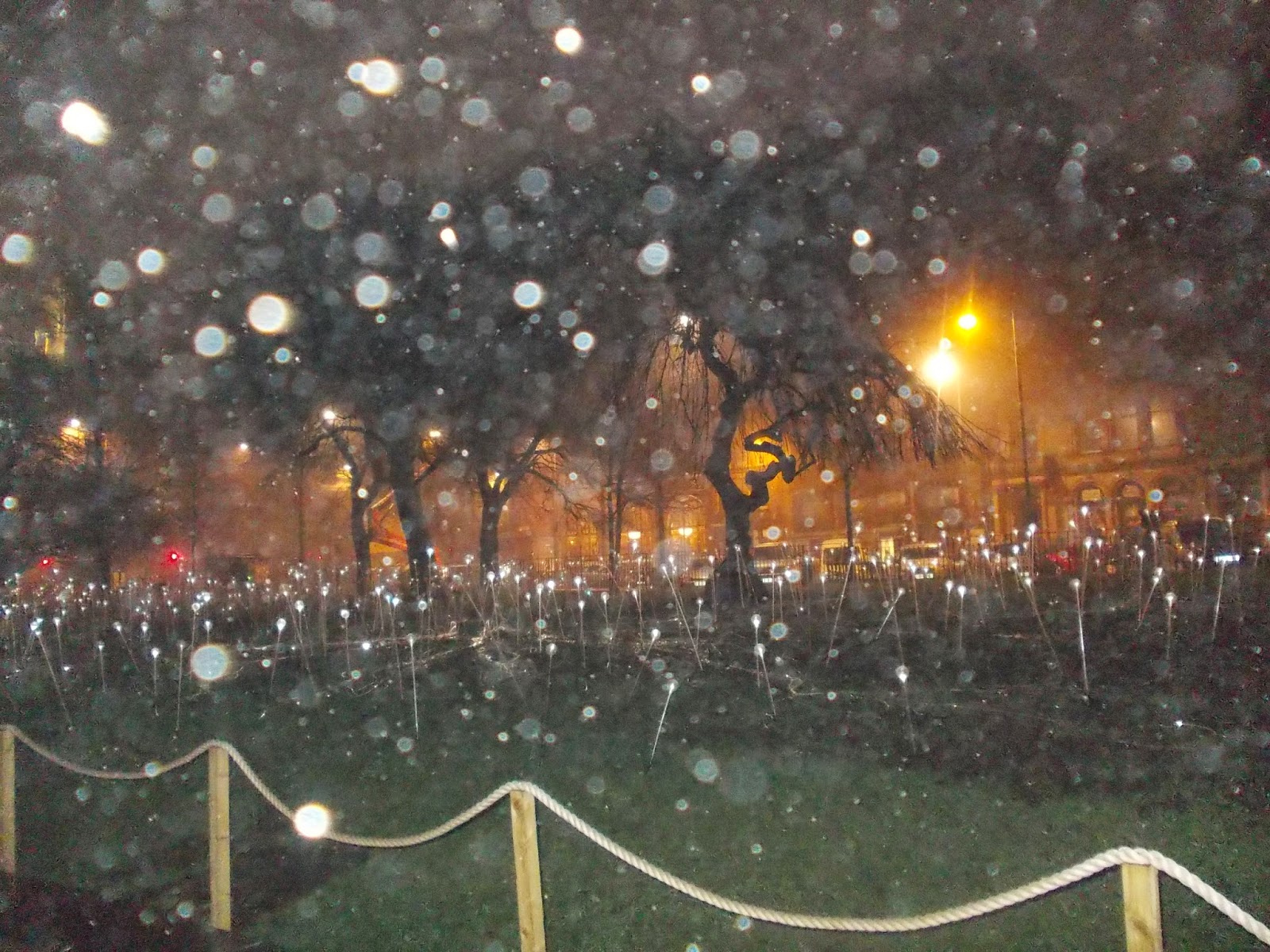