I Hate Musicals - so Why Do I Love Frozen?


I used to do musical theatre.  I used to be in a an amateur musical theatre group.  While my friends were buying Nirvana and Foo Fighters CDs, I was buying 'Best of the Musicals' and Michael Ball CDs.

Hmm...I'm starting to see why I never fit in at school...

I waxed lyrical to all and sundry about the latest musical our group were attempting - Oliver, Bugsy Malone, Mack and Mabel, musical-medley shows.

I made family, extended family, friends of the family buy tickets to see me in yet another chorus role or minor part.  I even roped friends into joining the group with me.

I spent more than your average teenager's time in ball-gowns, feather boas and costumes made out of orange curtains.

When I hit 19 though and started doing Acting and Performance at college, I completely lost the musical love.

I fell in love with literature and serious drama; the subtleties of lighting, metaphors, dark monologues and mirroring techniques.

Musicals suddenly seemed shallow and overdone.  The costumes were too shiny.  The acting was too much.  The songs were boring and got in the way.  Everyone was trying too hard.

Suddenly, everything I'd ever done seemed embarrassing and so. not. me.

I stopped being able to listen to musical CDs.  The passion I'd had dissipated into thin air - and as a result I could no longer stand watching a musical.  I started listening to Alanis Morrisette -A LOT- and Placebo, to distance myself from my previous whimsy.

I met my husband in a musical society.  I have good friends who still do musicals, but I won't be going to see any of their shows any time soon.

I feel rude, they feel as though I'm under-appreciating their talents; it's a horrible situation.  They always ask hopefully, but I always say no.  there's no point.  I'll hate it.

I'll wish I was drunk the whole time as time goes ridiculously slowly and I'm tortured by the crazy amount singing and reprises that never end.  There'll be that one elderly guy who is a stalwart of the amateur show world but is unintelligible and a bad singer and is a main role for no other reason than he has been going since he was 3 and his granny is in the costume department.

It's money and time, both of which I am very short of.

I am a Theatre snob, so intrinsically jaded, you'll never get me back.

So why do I love it so much?  Why have I got the soundtrack in my car?  Don't I know all of the words, pitch-perfect, to both parts of the reprise?  Have I had daydreams about performing as Elsa over Anna because my voice is more suited to Elsa?

What does this mean?

Have I opened up the 'gaaaaaaaaaates?'

I don't know if I'm elated or gassy, but I'm somewhere in that zoooone!


What is wrong with me?  How has this happened? 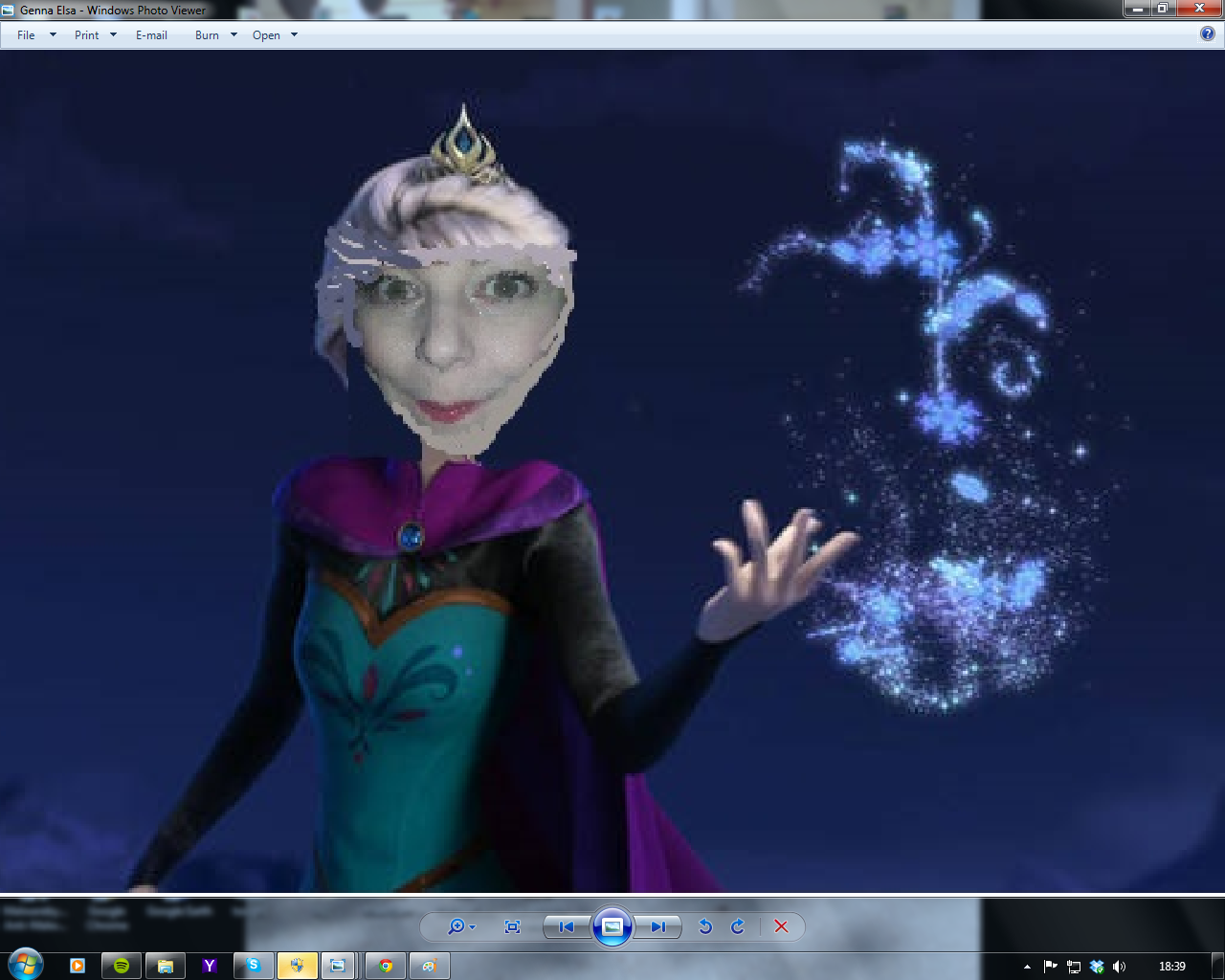 Dave made me a photo of myself so I can realise my dreams.  I'm hoping this will catch the eye of anyone wanting to make a musical of Frozen, casting me as Elsa.